A Media Matters analysis of broadcast and cable news found that networks discussed anti-LGBTQ violence and homicides only 22 times for less than 40 minutes across seven channels in 2017, even though it was the deadliest year in hate violence against the community since at least 2012. The majority of the coverage was about two specific stories and came on just four days, and the networks rarely noted the trend of increasing anti-LGBTQ violence nationwide in their coverage.

Media Matters analyzed 2017 coverage of the deadliest year in anti-LGBTQ hate violence since at least 2012 on cable and broadcast TV news, flagging segments in which speakers focused on anti-LGBTQ violence or on a specific anti-LGBTQ killing. We analyzed cable TV news coverage between 6 a.m. and midnight on CNN, Fox News, and MSNBC and broadcast TV news coverage on the morning shows, flagship evening news programs, and Sunday political talk shows on ABC, CBS, NBC, and Fox Broadcasting Co. Here are some of our key findings:

Anti-LGBTQ hate homicides in 2017 were at their highest rate in more than five years, mirroring a years-long rise in anti-LGBTQ hate incidents

NCAVP finds that anti-LGBTQ murders were up by 86 percent in 2017, and the latest FBI data found an increase in anti-LGBTQ hate crimes in 2016. The National Coalition of Anti-Violence Programs (NCAVP) reported that anti-LGBTQ homicides were up by 86 percent in 2017, with the number of victims growing from 28 in 2016 to 52 in 2017. Of the 52 victims, 27 identified as transgender or gender nonconforming and 22 were transgender women of color. People of color made up 71 percent of anti-LGBTQ hate homicide victims in 2017, and 67 percent of the total victims were under the age of 35. According to a report by the Human Rights Campaign and the Trans People of Color Coalition, “Transgender women are estimated to face more than four times the risk of becoming homicide victims than the general population of all women.” These findings reflect a general trend of increasing anti-LGBTQ hate crimes and violence. In November, the Human Rights Campaign reported that the FBI’s 2016 hate crime statistics showed increases in anti-LGBTQ hate crimes, noting, “Of the 6,121 incidents reported, 1,076 were based on sexual orientation bias and 124 were based on gender identity bias. These numbers reflect a two percent and nine percent increase, respectively.” [National Coalition of Anti-Violence Programs, January 2018; Human Rights Campaign and Trans People of Color Coalition, 2017; Human Rights Campaign, 11/13/17]

Some media have reported on the rise in anti-LGBTQ violence throughout 2017. Media have been aware of increasing violence against LGBTQ people since well before NCAVP’s January report was released. In March 2017, The Washington Post wrote that seven transgender women had been killed only two months into the year, quoting Rep. Joe Kennedy III (D-MA) saying that the country was “certainly on pace to blow right by the record set last year.” The article also noted that “while not unprecedented, the frequency of the killings has rattled a community whose members are prone to suffering violent attacks, whether hate-based or otherwise.” That same week, Newsweek similarly reported that those seven murders put “the rate well on course to beat the previous figure of 23 reported murders” of transgender people in 2016. In June, The Daily Beast reported on NCAVP’s 2016 report, noting that the year “was the deadliest year on record for the LGBT community” and that it marked an increase in anti-LGBTQ homicides even if you didn’t count the “49 victims of the Pulse nightclub massacre” in Orlando, FL. The report added that “anti-LGBT violence shows no signs of stopping in 2017” and that the year was “on track to be the most violent on record for the U.S. transgender community.” [The Washington Post, 3/16/17; Newsweek, 3/15/17; The Daily Beast, 6/12/17] 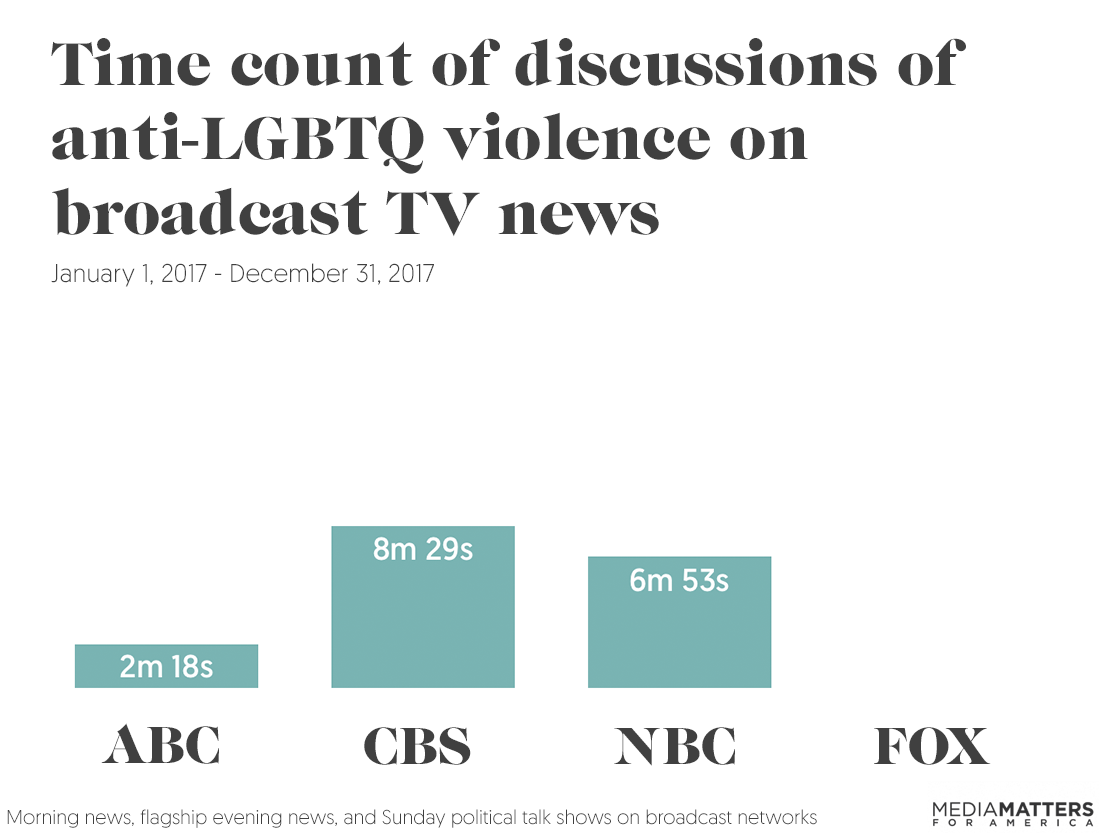 Throughout 2017, broadcast and cable news spent a total of 39 minutes and 36 seconds discussing anti-LGBTQ hate violence. Broadcast networks ABC, CBS, NBC, and Fox Broadcasting Co. spent a total of just over 17.5 minutes during their morning shows, flagship evening news programs, and Sunday political talk shows discussing anti-LGBTQ hate violence in 2017. Cable news networks CNN, Fox News, and MSNBC, meanwhile, spent just under 22 minutes covering the topic throughout the year, based on a review of 18 hours of coverage every day between 6 a.m. and midnight. Of the total 39 minutes and 36 seconds of coverage across networks, 24.5 minutes were spent discussing just two stories — the murder of Scout Schultz and Attorney General Jeff Sessions’ decision to send a hate crimes prosecutor to investigate the death of Kedarie Johnson — accounting for more than 60 percent of the coverage. Fox News spent the most time discussing anti-LGBTQ violence, devoting 10 minutes and 21 seconds to the topic, but more than 7.5 minutes of that coverage came from one segment that included disgraced former Los Angeles Police Department Detective Mark Fuhrman defending the police officer who shot Schultz. Fuhrman became toxic during the O.J. Simpson murder trial with the discovery of hours of video tape of him using a racial epithet and was later charged with perjury for lying under oath about his language. Fox News has a history of hosting Fuhrman to discuss police violence. MSNBC had the most segments addressing the subject, but its coverage lasted less than 5.5 minutes in total, the lowest of any cable channel. In terms of broadcast networks, Fox Broadcasting Co. did not address anti-LGBTQ violence in 2017 but does not have morning or evening news programming; ABC News had the next least amount of coverage with less than 2.5 minutes. [Fox News, The Story with Martha MacCallum, 9/19/17; Media Matters, 3/30/16]

Across networks, anti-LGBTQ violence was discussed only 22 times in 2017, and only seven of those reports explicitly mentioned or alluded to it as part of an overall upward trend

Throughout 2017, cable and broadcast news shows discussed anti-LGBTQ violence only 22 times. An analysis of programming between 6 a.m. and midnight on CNN, MSNBC, and Fox News and on the morning shows, flagship evening news programs, and Sunday political talk shows on broadcast stations ABC, CBS, NBC, and Fox Broadcasting Co. found that networks discussed hate violence against the LGBTQ community only 22 times in total in 2017. MSNBC had the most discussions, with six pieces of coverage, and ABC News and Fox Broadcasting Co. had the least coverage, with one and zero segments, respectively, although Fox does not have morning or evening news programming like the other broadcast networks.

Out of 22 discussions of anti-LGBTQ violence across the networks, eight were specifically about the murder of Scout Schultz. More than one-third of the discussions about anti-LGBTQ violence in 2017 were about a single case, the killing of Scout Schultz, the “bisexual, nonbinary, and intersex” president of an LGBTQ student group at Georgia Tech, who used the gender-neutral pronoun they. All eight discussions occurred between September 17 and 19, while protests were erupting on the Georgia Tech campus. A campus police officer fatally shot Schultz, who reportedly was holding a multipurpose tool with an unextended blade and saying “shoot me,” after Schultz “called 911 to report a suspicious white male with long blonde hair on campus holding a knife and possibly a gun,” according to The New York Times. Schultz had left three suicide notes in their room, and, according to the Times, their mother said that they “suffered from depression and had attempted suicide in the past.” Half of the segments were framed around the campus protests that erupted after Schultz’s murder, and of the eight discussions, only three mentioned Schultz’s LGBTQ identity. [The New York Times, 9/18/17]

Media Matters searched Nexis transcripts for cable TV coverage appearing between 6 a.m. and midnight on CNN and between 5 p.m. and 11 p.m. on Fox News and MSNBC (daytime transcripts for those networks are not available on Nexis), as well as transcripts of broadcast TV news morning shows (Good Morning America, CBS This Morning, and Today) flagship nightly news shows, and Sunday political talk shows on ABC News, CBS News, and NBC News between January 1, 2017, and December 31, 2017, for mentions of the words or variations of the words “LGBT,” “gay,” “transgender,” “gender identity,” “lesbian,” “bisexual,” “sexual orientation,” “gender nonconforming,” or “gender fluid” occurring within 25 words of the terms or variations of the terms “violence,” “crime,” “hate,” “attack,” “homicide,” “shoot,” “murder,” “death,” “die,” or “kill.”

We also searched Nexis transcripts of Fox Broadcasting Co.’s Sunday show Fox News Sunday (the network does not have an evening or morning news program) for the same terms. Any reruns of programming were not included in analysis.

Additionally, Media Matters conducted the same searches on iQ media for the above terms and names appearing on MSNBC’s and Fox News’ programming between 6 a.m. and midnight for the same time frame, as full transcripts from shows on these networks’ daytime programming are not available on Nexis. The iQ media search of Fox News and MSNBC coverage was limited by iQ media’s transcripts.