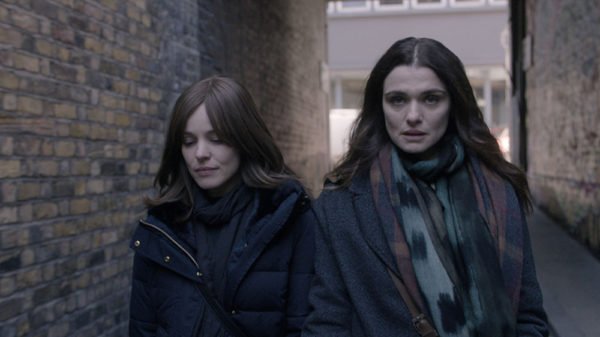 Disobedience is the first English language film for award-winning Chilean writer/director Sebastián Lelio, and with it, he continues his theme of stories that are centered around strong unique women.  First, there was ‘Gloria’ followed closely by his Oscar-winning A Fantastic Woman that starred Daniela Vega a trans actress, and now comes this tale of a lesbian love affair within London’s Orthodox Jewish community.

Ronit (Rachel Weisz) is an ex-pat photographer based in NY who suddenly gets a call that her estranged father, a celebrated Rabbi in London, has died. Her initial reaction is to get drunk and then have anonymous sex in a bar bathroom, but then she sobers up and gets on a plane back to the home she left un a great hurry several years ago.

She is met at the door of the Shiva by a very surprised Dovid (Alessandro Nivola) her old childhood friend and the Rav’s protege. He reluctantly lets her in and when they start catching up on each other’s news. Ronit discovers Dovid has married Esti (Rachel McAdams) who had been more than just a friend to Ronit.

Dovid insists that Ronit stay with them, which judging by her reaction, Esti thinks is rather awkward. As do the rest of  Ronit’s extended family who hardly welcome the return of the prodigal daughter with open arms. A fact born out by the obituary in the local paper which states that Rav had no children at all.  Ronit’s attempt to find some resolution with grieving for her father is further exasperated when she discovers that he left her nothing in his will, giving everything away to the Synagogue.

From the moment Ronit first enters the house there is obviously some unspoken business between her and Esti which is just all conveyed in looks, but when they are eventually alone, Esti confesses that she went behind her husband’s back to have someone call Ronit about her father because she wanted to see her again. Slowly we learn that the Rabbi had walked in on the two being intimate one day, and hence Ronit took flight, and Esti was pressured into marrying Dovid.

Suddenly Esti who had been a dutiful wife shakes off her timidity and steals a kiss from Ronit, an incident that gets back to the school where Esti teaches.  It propels the two women to escape to a Hotel in central London for one night of passion which sees Esti being totally uninhibited, unlike her usual weekly obligatory Friday night sex with Dovid.

It is inevitable that Esti at least cannot go back to the married life she signed in for, but can she put aside her timidity for a moment so assert for what she wants, whatever that is?

Lielo co-wrote the script with Rebecca Lenkiewicz, based on the novel by Naomi Alderman that Weisz, who was also a producer on this, had optioned as a project for herself. Playing a martyred Jewish woman is no stretch for this Oscar-winning actress as we saw in Denial, but it was for Canadian and American ‘wasps’ McAdams and Nivola who were so convincing in their roles.  The drama may have ostensibly centered around Ronit, but it is the finely nuanced performance of McAdams as the conflicted Esti that really captures our sympathy.

It was also refreshing that Dovid was not made out to be the villain of the piece and Nivola captured him so perfectly as the troubled soul who maintained his integrity to the very end. This is a compelling performance that added such depth to the whole drama.

Leilo’s steady direction in a part of the world which must be so alien to him was remarkable, and mainly because he ensured that this very rather beautiful and touching love story steered well clear of ever becoming a melodrama