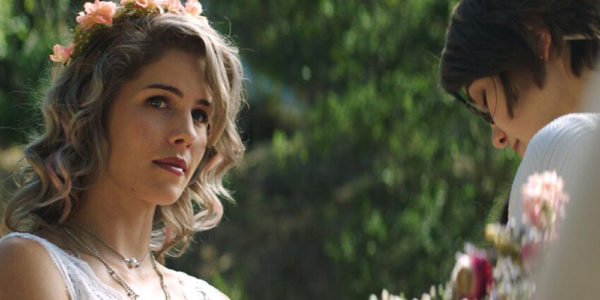 Calling a movie Funny Story is rather a brave move which can lead to unfulfilled expectations especially when your plot has its fair share of tragic incidents too. This feature from Michael J Gallagher whose work is usually created for the small screen. is full of good intentions and does at least start off on full of laughs, but then at the end gets way too muddled to be really funny

It starts with Walter (Matthew Glave) an aging actor who has coasted a very comfortable living out of once playing an action hero who has now become something of a cult figure.  He may have only had one role on the screen, but in his personal life he has had several and the movie starts with him trying to dump his latest very young girlfriend (Daiyse Tutor) who is far too interested in her cellphone to listen to him.  However when he comes to the punch line ‘we’re finished’ she trumps it with “I’m pregnant”

Later when  Nic (Jana Winternitz) his estranged adult daughter phones Walter, he is unable to break the news and invites himself to come stay with her on her vacation in Big Sur.  She reluctantly agrees but then asks him to give her friend Kim (Emily Bett Rickards) a ride as her car has broken down.  Kim, however, is hardly a perfect traveling companion as she seems angry with the world in general, and with Walter ( who she has never met before) in particular.  However, It doesn’t stop her putting the moves on him that night and having sex.

Then what had been an odd couple road movie morphs into something much more difficult and rather awkward when they arrive at the vacation house packed with women and Nic comes out to her startled father and announces that Kim is, in fact, her fiance who she is about to marry the very next day.

Now Walter has two pieces of major news that he has to tell Nic about but he is faced with the dilemma of trying to decide if and how he should share with her as she prepares for what could be a doomed marriage after all.

Up to this point, the movie is deliciously funny thanks in part to the pitch-perfect performances of the three main actors. Walter’s awkwardness with his daughter’s sexuality is handled clumsily and seems some out of keeping with a man who has lived and worked in Hollywood all his life.  The muddle that follows (which we cannot go into without spoilers)  takes some of the gloss off the humor, but it has its heart in the right place which makes you want this engaging wee drama to succeed.