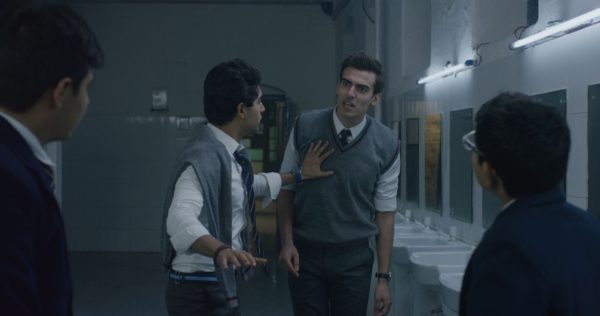 This very prestigious all-boys boarding school in India which is the setting for The Noblemen is obviously a remnant of British colonial days and the children are still expected to practice the age-old rituals and codes which should have been banished years ago. Here in this very formal setting, the pupils are reluctantly bound by an outdated hierarchal system which too often allows the senior boys to use the younger sons as their slaves.

This then is the story of 14-year-old-Shay (Ali Haji ) who, because he hates sports and prefers drama class, is labeled a sissy and gay by other boys.  Devoted to his invalid mother who he is allowed to call via Skype once a week, and who has promised that she will be well enough to finally visit him on Founders Day at the end of the term.

Shay’s only two friends are Ganesh (Hardik Thakkar ) who is the butt of everyone’s jokes because he is so overweight, and Pia (Muskkaan Jaferi)the rather spunky daughter of the new history teacher and thus the only girl pupil in the school.

When Shay and Pia are given the leading roles in the Founders Day production of Merchant of Venice, it really upsets Baadeal one of the wealthier older boys. He wants to follow in the footsteps of his father who is a Bollywood movie star and this would have been the perfect part to show off his talent.  Equally important is the fact that he wants to be with Pia and he sees this as a perfect opportunity for him to get close to her.

When Baadeal’s clumsy attempt to bribe Mr. Murli (Kunal Kapoor ) the drama teacher fails, he enlists Arjun (Mohammed Ali Mir )a school captain and its leading bully, to ‘persuade’ Shay to give up the part.  Despite all the brutal force they apply to get him agree, Shay stubbornly refuses as he wants to be able to perform for his mother.

It’s a relentless battle of brawn against wit, and even Ganesh gets drawn into it in such a way that it almost costs him his life, but it isn’t until Mr. Murli becomes aware of the situation and gets involved, and tries to help, that it really gets out of control.

Once Mr. Murli goes public with the story and Shay is now outed and humiliated by being labeled a rat by almost the entire school, taking a leaf out of The Merchant of Venice he seeks his own bloody revenge.

The Noblemen brings home the point that in such an insidious regime where bullying still persists it is a breeding ground for even more homophobia. The biggest offense that any of these boys can have is being gay, and the brutal punishment administered to Shay just reinforced his long-held fears about the consequences even more. That this can contribute to making someone so ashamed of their own sexuality that they will take such extreme measures is indefensible, but as this film proves, makes for a very compelling bloody drama.

The Noblemen is the feature directing debut of filmmaker Vandana Kataria, and is unusual for an indie film that it boasts one major Bollywood actor in its cast: Kunal Kapoor as the liberal drama teacher.