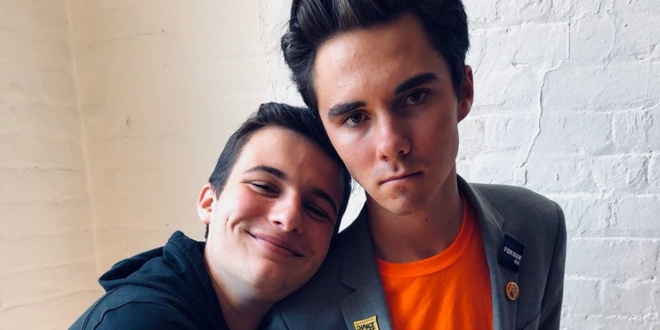 Parkland shooting survivors Cameron Kasky and David Hogg are reportedly going to prom together. On Monday, Kasky shared a Tweet of himself smiling and embracing Hogg with the caption “Prom 2018.”

The Marjory Stoneman Douglas High students have been among the most visible survivors of the Feb. 14 mass school shooting. Hogg, a senior, and Kasky, a junior, have appeared together in interviews advocating for gun control and school safety. They also helped organize the “March For Our Lives’’ rally in Washington, D.C. last month.

The school’s senior class is organizing an “over the top” prom at the Westin Fort Lauderdale Beach Resort. The prom will be both romantic and glamorous while paying tribute to the students who lost their lives Feb. 14. There will be a memorial near the entrance of the prom’s ballroom.

As far as I can tell, neither student is openly gay, so this could be both a statement of solidarity for LGBT youth and an immense troll of the right wingers, who have singled out Hogg in particular with countless anti-gay memes.

Canadians are being asked to host LGBTQ+ Ukrainian refugees