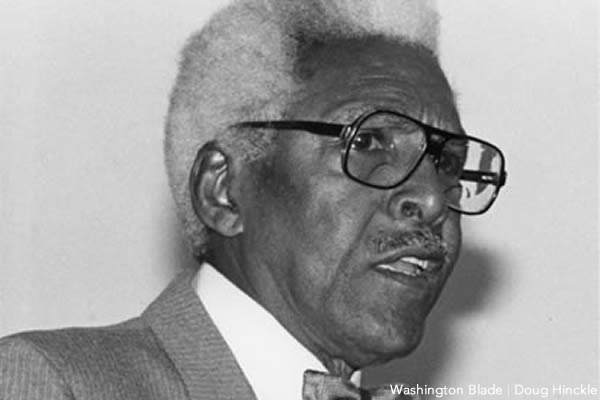 The Montgomery County, Md., Board of Education voted 6-2 on April 12 to name a new elementary school in Rockville after African-American civil rights leader Bayard Rustin, marking the first time a school in the county has been named after a well-known gay person.

The Bayard Rustin Elementary School is scheduled to open in September.

Rustin, a lifelong civil rights activist, served as an adviser to the Rev. Martin Luther King Jr. He is best known for his role as lead organizer of the 1963 March on Washington in which King delivered his famous “I Have A Dream” speech.

Although his sexual orientation was known to his civil rights colleagues in the 1960s, published biographies say Rustin became an outspoken supporter of the LGBT rights movement in the late 1970s and 1980s. He died in 1987.

In its decision to select the name Bayard Rustin Elementary School, the school board overruled a recommendation by an advisory committee of parents and community members created by the board that called for naming the school after Lillian Brown.

Brown was a Rockville native, educator and author who was barred as a child from attending the county’s public schools due to racial segregation. She died in 2002.

“This kind of statement marginalizes as well as effectively makes invisible children who are part of LGBTQ families and children who may identify as LGBTQ themselves,” the magazine quoted Lucinda Grinnell, a professor of LGBTQ history and whose child will attend the school, as saying.

“In my opinion, it would be great for Montgomery County Public Schools to honor a black gay man who made such an important contribution to the civil rights movement,” the magazine quoted her as saying. “It’s important for children’s sense of self-worth to see themselves represented in their schools,” she was quoted as saying.

The magazine quoted the mother of a former gay student as saying people who question the propriety of naming an elementary school after a gay person “are implying that there is something about gayness that compromises the innocence of our children.”

The mother, Lily Qi, added, “So let me be very clear. There is nothing vulgar or scandalous about being gay. The sooner we can begin these conversations, the more effective they will be,” the magazine quoted her as saying.

Among those who expressed support for naming the school after Rustin were U.S. Rep. John Lewis (D-Ga.), who worked with Rustin and King on civil rights issues; and Walter Naegle, Rustin’s longtime life partner.

Members of the advisory committee that wanted the school to be named after Lillian Brown said they did not object to Rustin because he was gay. They said Brown would be a better choice for the school name because she was a native of Rockville who later taught in Montgomery County schools and co-authored a book on the history of Montgomery County’s black public schools, Bethesda Magazine reports.

A statement released by Montgomery County Schools after the board voted to name the school after Rustin describes Rustin as “a believer in non-violence, a socialist, a civil rights organizer, and an openly gay black man.” It adds that Rustin “played a major role in civil rights and equality movements of the 1940s, 1950s, and 1960s” and noted he was active in the Congress of Racial Equality (CORE) and the Southern Christian Leadership Conference (SCLC).