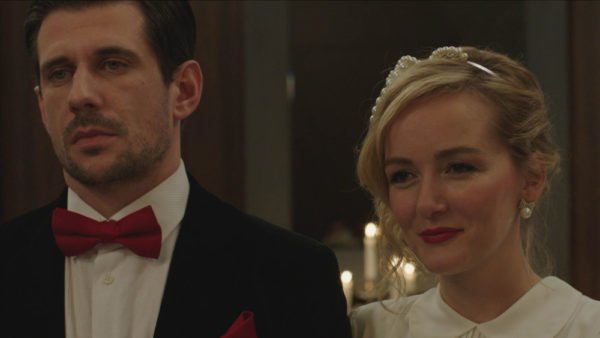 LGBT movies made in Kosova are such a rarity  (if there are even others besides this one) it is inevitable that coming from a country still torn apart by strife, and culturally deeply homophobic, that any such films would never be allowed a happy ending. For once that is hardly a spoiler but the acceptance of reality in a society where it is not actually illegal to be homosexual, but it is nigh on impossible to be openly gay and survive.

Kosovian filmmaker Blerta Zeqiri’s debut feature film combines a powerful indictment of her country’s troubling political climate with a most tender and touching love story that will have you reaching for a box of Kleenex more than once.

It starts off very raw at a freezing cold receiving facility on the Serbian border where Bekim (Alban Ukaj) is accompanying his fiancee Anita (Adriana Matoshi) for the latest round of unclaimed bodies from the war have been exhumed in the hopes they can be identified.  Anita’s parents have been missing since the war, but she does not find them here, as they drive back home together, there is this unspoken fear that she never will find out what happened to them.

There is a flashback of how the two first met when Bekim made a move on Anita in the Bar that he owns when she was more than a little drunk and they happily ended up in bed.  Now their impending marriage is like a chance for Anita to finally move forward and maybe start making her own family.

When they arrive back in town they discover the arrival of Nol (Genc Salihu ) Bekim’s best friend who had suddenly left Kosova two years to go to live in France and become a successful musician. The three of them hang out and get drunk together, but over the next few days, Anita soon senses that the presence of Nol has not just unsettled Bekim, but it has also changed the dimension between the two of them.

When Anita demands an explanation from Bekim he allows her to think that the great secret love of Nol’s life that he has lost and needs to be consoled about, is his sister Zana (Vjosa Abazi) when the reality is that it is Bekim himself.

Bekim is torn between being with the real love of his life or by doing the right thing by marrying Anita,  but in the culture he has been brought up in, and which he feels he has no alternative to than to continue to live in,  he doesn’t see himself having any choice.

As much as our sympathy automatically lies with these two men,  Zeqiri also subtly points out that Anita is also a victim here by getting married to a man who doesn’t really love her.  This is, after all, a story of a new marriage that is trying to start without burying any of their past.

Zeqiri shoots the scenes between Nol and Bekim with an extraordinary open tenderness which will probably shock her fellow Kosovians.  In fact, they also lead relatively comfortable lives which are in very sharp contrast to the scenes of wretched Serbs caught in midst of the conflict who now most still fear for their very lives.

Superb pitch-perfect performances from the three main actors actually resulted in them winning a special Award as an ensemble at a Film Festival recently.

The Marriage is an exceptionally wonderful thought-provoking drama that is completely engaging and makes a fascinating contribution to contemporary queer cinema.

Duo Quartet performs at Occidental Center for the Arts Jan. 30