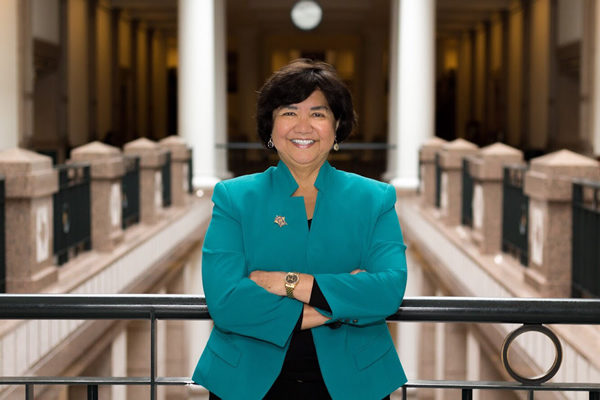 According to results from The New York Times, Valdez secured 53.1 percent of the vote in the Democratic run-off compared to the 46.9 percent won by her competitor, businessperson Andrew White. After polls closed in Texas at 7 p.m., the Associated Press called the race a few hours later at 9:37 Central Time.

Valdez, who was endorsed by the LGBTQ Victory Fund, is the first out lesbian to win the nomination of a major political party and now proceeds to the general election against Gov. Greg Abbott. If successful, Valdez could become the first openly gay person elected governor in the United States, although other openly gay candidates in 2018 are seeking that distinction.

Annise Parker, CEO of the Victory Fund and former Houston mayor, said in a statement Texas “made history” by nominating Valdez to take on Abbott.

“While bigoted state legislators in Austin continue to divide the state and target our community, Texans are voting for LGBTQ candidates because we are authentic, values-driven leaders who deliver on promises,” Parker said. “That is why Lupe won, and we will work hard to expose Gov. Abbott’s cynical politics of divisiveness and showcase Lupe’s positive agenda for Texans over the next five months.”

Valdez is set to take on a governor of Texas who has built a substantial anti-LGBT record. Abbott has signed an anti-LGBT “religious freedom” adoption bill into law, urged the Texas Supreme Court to undermine the 2015 ruling for marriage equality nationwide and called a special session of the state legislature to pass anti-transgender bathroom legislation, which lawmakers ultimately rejected.

But Valdez faces an uphill battle in challenging a Republican incumbent in a “red” state. The new Democratic nominee must overcome a 10-point gap in the polls and Abbott’s $40 million war chest.

In an interview with the Washington Blade earlier this month, Valdez said she’s prepared for the challenge.

“Ten points is the closest we’ve been in over 10 years,” Valdez said. “The prior people that have run have not gotten that close, and we haven’t even started running against him. We’re not even calling him out or going to him on anything.”

Already sexual orientation has become an issue in the race. According to a report in the Dallas Morning News, Abbott’s re-election campaign launched a new website that blasts Valdez as “wrong for Texas,” and indirectly notes she’s a lesbian.

The 30-second ad shows a photo of Valdez and cites this quote from her on abortion rights in late January: “My partner is a very strong, independent chiropractor. For me to try to tell her what she should do with her body, she would tell me what to do with my mouth.” The quote is a reference to Valdez’s partner, Lindsay Brown.

Asked by the Dallas Morning News if the Republican incumbent was trying to reinforce that Valdez is gay, Abbott spokesman John Wittman reportedly replied, “The quote is a way to remind people that Lupe Valdez is anti-life, pro-abortion.”

In a written response to the ad, Valdez told the Dallas Morning News she’s a Texas native, a product of Texas public schools and a former Army reservist and law enforcement officer.

“I know first-hand the importance of looking out for all Texans not just corporations and well connected CEOs,” Valdez is quoted as saying. “The ‘New Texas’ that I’m fighting for is one where all Texans have opportunities to succeed. There is nothing too liberal about that.”

Valdez wasn’t the only candidate to face a primary Tuesday night. Texas, Georgia, Kentucky and Arkansas each had elections.

• Also in Texas, out lesbian Iraq war veteran Gina Ortiz Jones clinched the Democratic nomination in a run-off against Rick Treviño in her bid to represent Texas’ 23rd congressional district in the U.S. House. Jones will challenge Rep. Will Hurd (R-Texas) in what is rated as a toss-up race.

• In Kentucky, former Lexington Mayor Jim Gray came up short in his primary to win the Democratic nomination to run for the U.S. House in his state’s sixth congressional district. In a six-way race, Marine Corps veteran Amy McGrath won 48.7 percent of the vote compared to the 40.5 percent won by Gray.

• Also in Kentucky, David Ermold, one of the gay men who sued Rowan County Clerk Kim Davis after she refused to give him a marriage license, came up short in his bid to obtain the Democratic primary to challenge her for her position. Winning the nomination instead was Elwood Caudill Jr., who works just across the hall from Davis as a 20-year veteran of the Property Valuation Administrator’s office. According to the Associated Press, Caudill ran a low-key campaign and promised not to make same-sex marriage an issue.

Why does the Mormon Church condemn homosexuality but support the Respect for Marriage Act?