Why Hate Crimes Are On The Rosa 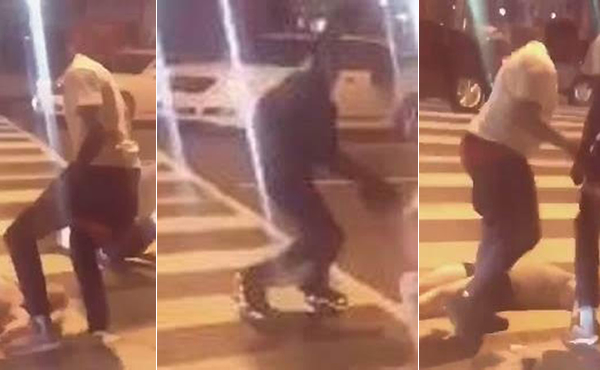 Police are looking for three suspects in an anti-gay attack last week.

You’ve probably heard all about it by now, or even seen the horrific cell phone video capturing most of it. Just after midnight on Sunday, April 15, two gay men were viciously assaulted on the corner of Vermont Avenue and U Street. Sort of a strange place for such a thing to happen, given that it’s practically in sight of the entrances to three of the city’s busier gay bars, one of which, for better or worse, was recently named the best in the nation.

These instances are always jarring, especially when they happen in your own city, in stretches of pavement you pound with regularity. It’s even more jarring given the statistics surrounding it — LGBTQ hate crimes are on the rise here at home and around the world. It’s depressing. And I’m not so naive to think that Obama’s magic gay marriage wand would have done away with this sort of thing. But I was hopeful that it might help.

People are struggling to find a cause for this uptick in hate. D.C.’s own top cop Police Chief Peter Newsham admitted that, “it’s hard to say exactly what the increase is due to.” This much is certain, It seems to be an angry age we find ourselves in. And it’s certainly not just the queer community feeling the brunt of this. Hate crimes generally seem to be on the rise across the board. Even instances of anti-Semitism are up. Here in Washington, D.C., there were 66 instances of bias-related crimes in 2015 and 107 in 2016. Last year saw at least 163 instances. So where is it all coming from? Certainly, there is some from-the-top-down blame to go around.

When Obama announced in 2012 that he had ‘evolved’ on gay marriage, it provided a tone of acceptance that other Americans were able to draw from (just look to Maryland for an example of this). So, when it comes to tone and trendsetting, can the same be said for the current administration, meaning can this sort of thing cut the other way? Is President Donald Trump to blame for the uptick in bias-related hate crimes? Well, maybe. At the very least he might be an unindicted co-conspirator. And this is not all that farfetched. It’s been proven that the man and his rallies incite violence. Any cursory reading of his Twitter feed shows that he has no boundaries whatsoever. The man sitting in our highest office has no qualms about petty insults and name-calling. And this sort of hateful and reckless rhetoric tends to trickle down.

So what’s to be done? Know that soon, something has to give. And it will certainly break our way. But until then, take a cue from others. Yes, it is incredibly disheartening that someone posted the video of the assault on Twitter, as if to brag of it and further humiliate the victims. But at the end someone does come to their aid, and someone called for help. It’s in these worst of times that people can show the best in themselves. Take solace in the fact that the community raised over $20,000 for the two victims. And know that a local gay dentist volunteered his time and skill to repair their cracked smiles, charging nothing for his services. Know there’s a lot of love out there to counter this trickle down of hate.

In the long run, eventually something has to give. And if these waves of hate tend to come and go, the next crest may be ours. So until then, stay vigilant, stay active, and stay charitable.

How to get smarter & fight harder for LGBTQ rights