The younger brother of the 19-year old youth charged with killing 17 people in the Feb. 14 school shooting in Parkland, Fla., has announced the formation of a national anti-bullying organization that he says will be supported by high school and middle school students from across the country.

Zachary Cruz, 18, told reporters at a June 14 news conference at the National Press Club in Washington that he hopes the newly launched organization, among other things, will be able to help troubled, isolated young people victimized by bullying like his brother, Nicholas Cruz, before they engage in destructive behavior that can endanger the lives of themselves and others.

“I cannot stand here today and defend my brother or make excuses for him,” Zachary Cruz said. “His story is complicated, tragic and can be told elsewhere,” he said. “However, I can say very clearly today that our schools all across the country have ticking time bombs in them. Bullying leads to abuse and violence and not the least isolation,” he said.

Zachary Cruz has said he believes the behavior of his brother Nicholas was shaped at least in part by bullying he suffered while in school, which Zachary Cruz believes resulted in Nicholas becoming isolated and highly troubled.

Cruz and Mike Donovan, president and CEO of Nexus Services, Inc., a Virginia-based immigrant oriented bail bond company that is funding the new group, said they have named the new organization, We Isolate No-One (WIN): The Zachary Cruz Foundation to End Bullying.

They said the nonprofit foundation has already begun operating a 24-hour anti-bullying hotline staffed by trained crisis responders employed by Nexus Services who will provide emergency assistance to bullying victims in crisis as well as report bullying cases to school principals.

Donovan told the news conference the trained hotline staff provides crisis counseling for Nexus’s clients from one of the company’s call centers in Harrisonburg, Va. He said it was an easy transition for them to take on the additional role in operating the anti-bullying hotline.

He said a nonprofit law firm funded by Nexus Services, called Nexus Derechos Humanos Attorneys, Inc., will follow up on the bullying incidents identified through the hotline or through WIN student chapters formed in schools to determine whether legal action should be taken if a school fails to appropriately respond to a bullying incident. 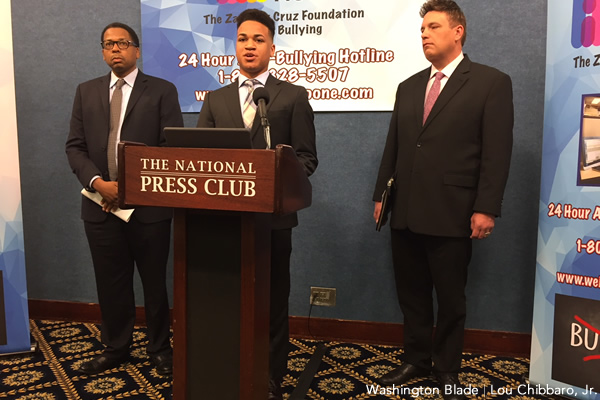 According to Donovan, he and Nexus Services would be contributing between $800,000 and $1.2 million for the startup phase of WIN. Donovan, who’s gay and founded Nexus Services with his husband, has emerged as an LGBT rights advocate in Virginia.

Cruz said his main focus this summer will be to encourage students in high schools and middle schools throughout the country to get ready to form WIN chapters in their schools at the start of the new school year in late August.

“We will train to spot bullying, abuse and isolation and how to intervene to head off the problem,” Cruz told reporters at the news conference. “And all of this work will be peer to peer,” he said, adding that adults and school officials will play a supportive role.

“While it may seem like a lot for kids to handle, we’re the ones who see this behavior,” he said. “It can be handled by teachers, but kids know. Since we know, it’s our responsibility to make changes.”

Donovan told the Washington Blade after the news conference that he and Zachary Cruz are aware that there are other existing organizations, including LGBT organizations, that address the issue of bullying.

GLSEN spokesperson Joanna Cifredo told the Blade bullying is one of many issues that GLSEN addresses in its school related programs.

“Bullying is a national issue and it’s a crisis,” Cifredo said. “We welcome all organizations that want to address bullying. There’s plenty of work to go around.”

Zachary Cruz surfaced in the news earlier this year when he was arrested for trespassing on the grounds of Marjory Stoneman Douglas High School in Parkland, Fla., where his brother Nicholas is charged with fatally shooting 17 students and staff members on Feb. 14.

An arrest report says Zachary Cruz told Broward County, Fla., Sheriff’s deputies he skateboarded onto the school grounds because he wanted to “reflect on the school shooting and soak it in.”

A short time later he pleaded no contest to the trespassing charge and was sentenced to six months’ probation.

Donovan said he first met Zachary Cruz when the law firm associated with Nexus Services challenged a decision by a judge to initially hold Cruz on a $500,000 bond for the trespassing charge that ordinarily would result in release on a $25 bond. With assistance and legal advice from the Nexus attorneys, Cruz requested and was granted from a judge a transfer of his probation obligation from Florida to Virginia, where Donovan offered him a job and a place to live and the chance to start a new life.

Cruz immediately impressed him, Donovan said, by expressing an interest in dealing with bullying and saying he wanted to form an organization to end bullying.

“And he was very clear that he believed that peer to peer work, that putting kids in charge of building better communities in schools was critically important,” Donovan recounted. “And he convinced me. Not only did he convince me that that was the right thing to do… But he convinced me that kids want that opportunity and it is our duty to empower them.”

Additional information about the Zachary Cruz WIN Foundation can be accessed at weisolatenoone.com.