Cicilline: No policies ‘in Place’ for Detained LGBT Immigrant Children 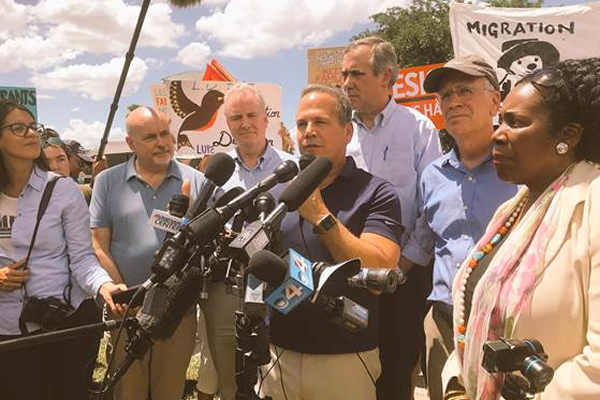 U.S. Rep. David Cicilline (D-R.I.) on June 17, 2018, speaks with reporters outside the McAllen Border Patrol Processing Center in McAllen, Texas. He said there are no specific policies “in place” to help LGBT immigrant children who have been separated from their parents. (Photo courtesy of Richard Luchette/U.S. Rep. David Cicilline)

Editor’s note: President Trump on Wednesday signed an executive order that stops the separation of immigrant children from their parents. The White House has yet to say how it will reunite them.

U.S. Rep. David Cicilline (D-R.I.) on Tuesday said there is no policy in place that specifically addresses the needs of LGBT immigrant children the Trump administration has separated from their parents.

Cicilline told the Washington Blade he asked Southwest Key Programs CEO Juan Sánchez if such a policy exists when he visited Casa Padre, a facility in Brownsville, Texas, in which nearly 1,500 boys are currently living.

Southwest Key, which is based in Austin, Texas, operates the facility that was once a Walmart supercenter. Cicilline told the Blade that Sánchez “indicated there were no policies in place that address the needs of LGBT youth.”

“That’s all he said,” said Cicilline. “They did say they attempt to address issues raised by the kids.”

The U.S. Department of Health and Human Services’ Office of Refugee Resettlement oversees Casa Padre and other detention facilities in which immigrant children who have been separated from their parents are being held. The agency did not respond to the Blade’s request for comment about whether it has LGBT-specific policies in place.

An Immigration Equality spokesperson on Tuesday said their organization is “not aware of any policies” that specifically address “how to treat or help LGBTQ youth or minors living with HIV.”

‘What is underway is a barbaric system’

Statistics from the U.S. Department of Homeland Security indicate 2,342 immigrant children since early May have been separated from their parents under the White House’s “zero tolerance” immigration policy. The Associated Press on Tuesday reported the Trump administration has opened at least three “tender age” shelters in South Texas to house babies and young immigrant children who have been separated from their parents.

Cicilline told the Blade he and his fellow lawmakers met with 10 women who were being held at the Port Isabel Detention Center, which U.S. Immigration and Customs Enforcement operates. Cicilline said a woman said her son was taken from her when she asked for asylum at a U.S. port of entry.

Cicilline on Twitter said he saw dozens of “kids by themselves in cages” inside the McAllen Border Patrol Processing Center.

“What is underway is a barbaric system of literally ripping children from their mothers’ arms,” Cicilline told the Blade.

The Trump administration’s policy has sparked condemnation in the U.S. and around the world.

Cicilline is among the co-sponsors of the Keep Families Together Act, which would ban the Department of Homeland Security from separating migrant children from their parents, “except in extraordinary circumstances.” U.S. Sen. Ted Cruz (R-Texas), who is being challenged by U.S. Rep. Beto Rourke (D-Texas), has introduced a bill that seeks to “limit the separation of families seeking asylum in the United States and expedite the asylum process for individuals arriving in the United States with children.”

Trump has continued to defend the policy in spite of these condemnations.

The Associated Press on Wednesday reported Nielsen — who left a Mexican restaurant in downtown D.C. the day before after members of Metro DC Democratic Socialists of America heckled her — is drafting an order that would end the policy. It was not immediately clear at deadline whether Trump will support it, but the Associated Press reported he said at the White House that he would sign something “in a little while.”

Cicilline bristled at the notion that Trump is using immigrant children as a bargaining chip to convince Democrats to support his immigration agenda.

“The idea that you would enact a policy to rip children from their mothers’ arms is disgusting,” Cicilline told the Blade.

LGBTI activists are among those who have also criticized Trump over this policy.

“As a nation of immigrants, the United States has stood as a beacon of hope for people around the world fleeing persecution, violence and oppression,” Human Rights Campaign Government Affairs Director David Stacy told the Blade on Wednesday in a statement.

“The Trump-Pence administration’s attacks on immigrants, asylum seekers, and refugees is an affront to our values,” he added. “Like the vast majority of Americans on both sides of the aisle, we are appalled by this administration’s policy of ripping away children from their parents at the border.”

Equality California National Policy Director Valerie Ploumpis on Tuesday said these families “have already faced such suffering, poverty, discrimination and hardship that they left everything behind for the hope of a brighter future.”

“Too many members of our LGBTQ community know that pain,” she added. “That the Trump-Pence administration would further traumatize children by ripping them from their families — perhaps never to be reunited — truly shocks the conscience.”

Violence associated with gangs and drug trafficking have prompted LGBT and intersex people from Honduras, El Salvador and Guatemala to flee their respective countries. A lack of access to education, employment and health care have made transgender migrants in particular susceptible to discrimination, violence and exploitation.

Roxana Hernández, a trans woman from Honduras with HIV, was one of 25 trans women who were part of a 300-person caravan that traveled to the U.S. border earlier this year.

U.S. Customs and Border Protection took Hernández into custody on May 9 when she asked for asylum at the San Ysidro Port of Entry near San Diego. An ICE press release said Hernández entered its custody on May 13 and was being housed in a unit at Cibola County Correctional Center in Milan, N.M., for trans detainees.

The press release notes Hernández was admitted to the hospital with “symptoms of pneumonia, dehydration and complications associated with HIV” on May 17. Hernández died from cardiac arrest on May 25.

“She is the transsexual girl who died in the hands of the U.S. government,” said Erick Martínez, an LGBTI rights advocate in the Honduran capital of Tegucigalpa.

Andrea, left, a transgender woman who lives in San Luis Talpa, El Salvador, eats lunch at a restaurant in the Salvadoran capital of San Salvador on Sept. 23, 2017. She asked the Washington Blade not to use her real name and disclose her identity because of anti-trans violence in her hometown. Rampant violence has prompted many LGBT people in El Salvador and neighboring countries to flee. (Washington Blade photo by Michael K. Lavers)

LGBTI rights advocates in El Salvador with whom the Blade spoke this week also reiterated their criticism of Trump’s immigration policy, which includes his continued support for a wall along the U.S.-Mexico border.

“It’s sad,” said Bessy Rios, executive director of Asociación de Familiares y Amigos de Población LGBTI de la Mano Contigo. “Our people from the Northern Triangle — El Salvador, Guatemala and Honduras — are being mistreated, discriminated against, forced to migrate and they are forced to return when they arrive to the border.”

“The segregation that is occurring with the people who arrive — and above all with children — is a serious violation,” he told the Blade.