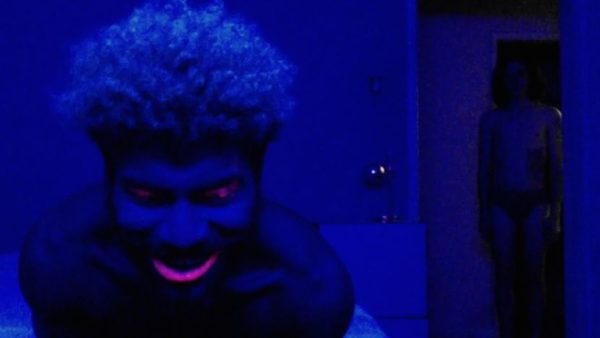 Set in three sections each named for one of the characters the movie kicks off with the departure of Luisa (Guega Peixoto) for a new job in Salvador. It is kind of odd that she is leaving behind her only brother Pedro (Shico Menegat) because she is extremely close to him, and now he will have to cope on his own with his impending Trial for blinding another student as a result of a fight he feels he was dragged into, and which got him expelled from College.

Pedro is a shy introvert who prefers never to leave his apartment especially as he is now convinced everyone stares at him, but as he has promised his sister to go out for 5 minutes every day he literally times himself so he doesn’t spend a second more outside.  He gets by performing as ‘Neon Boy’ on a website where he splatters his naked body with neon paint.  It is quite a lucrative business until he finds out that he is starting to lose his audience because someone else has copied his idea.

The two meet up and decide to do session online together which is a great hit with the fans, and also eventually with the two of them as well.  Leo (Bruno Fernandes) is the total opposite as he is outgoing, confident and surrounded by friends and the only reason he started his chatroom was he wanted some spending money when he won his dance scholarship.  The couple’s sensual and steamy online sessions soon convert into even more passionate ones offline as Leo empowers Pedro to start opening up for the first time in his life.

Pedro pins all his hopes on his burgeoning relationship with Leo which seems to be the first good thing that has happened to this orphaned youth for a very long time.  However, there is always this underlying feeling, which soon gets borne out, that this newfound happiness may only be temporary after all.

Hard Paint is the second feature written and directed by Filipe Matzembacher and  Marcio Reolon (who both still live in Porto Algre) and is an immensely more satisfying film than Seashore their first one. It is thoroughly engaging even though it is a melancholic tale whose message seems rather bleak for most of the time.  It is also a incisive comment on how the internet allows even the most isolated and conflicted souls to create these fantasy moments of escape from their own reality even if it means exploiting the weaknesses of others.

The two young lead newbie actors both gave superb fresh performances portraying the perfect balance of innocence and the inevitable acceptance of the limited opportunities that life could offer them.

Hard Paint is by no means perfect but its rather compelling take on life for these young queer guys is both refreshing and fascinating and it is quite easy to see why the Berlinale Judges wanted to honor it with an Award.