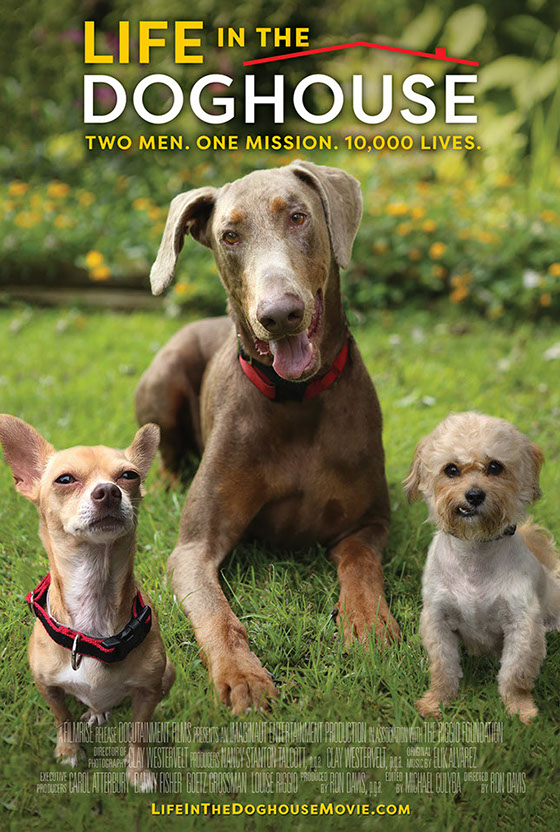 Life in The Doghouse is one of those documentaries that will touch the heart of the coldest of souls.  It’s a wonderful love story between two exceptional gay men and their ever-growing four-legged family which have taken over every semblance of what once passed as their ‘normal life’.

Ron Danta and Danny Robertshaw, both in their 60’s, live on a horse farm in North Carolina where they very successfully train show horses.  How they have the time and energy to do this is never made that clear from the film, as most of their days (and nights) are occupied by the menagerie of dogs that they have rescued mainly from animal shelters who would have had to exterminate them otherwise.

The 4000+ square house is currently home to an assortment of some 71 dogs that Ron & Danny have meticulously organized in such a way there is not a hint of chaos. It had all out as a spontaneous reaction to the immediate after-effects of Hurricane Katrina, when after the two of them had donated much-needed supplies to people holed up in a nearby Sports Stadium, they then turned their attention to all the pets that had been abandoned in the floods.

By driving their horse trucks down to the devastated area and picked up as many of the poor frightened dogs they could and drive them home before turning around to go back to get another load.

In the following years, this quickly morphed into a full-scale dog rescue service that the couple, with the aid of small team, has run since then.  What initially appears simply as a well-meaning gesture on the part of these selfless men, is actually a well-oiled operation that runs on basic tenets that Ron and Danny insist on sticking too.  They go out of their way to save the lives of the dogs whose days are numbered and may have health issues or behavioral problems, or simply are the type that rarely gets adopted.

The website for the Non-Profit named after them Danny & Ron’s Rescue, features the dogs that they consider are adoptable, but most of their success in getting their charges new homes is on the Horse Jumping Circuit where they have built up a remarkable following and reputation.

The documentary points out that they have successfully had 10,000 dogs adopted by families and new owners that they vet extremely carefully. Most people would be more than content with such an exceptional achievement, but Ron Danta is not happy that they cannot make a bigger indent into the 4 million pets that end up getting euthanized each year.

Both men are passionate about their crusade and seem happy enough that the only place in the house that is still theirs is the king-size bed but even that is shared with a handful of dogs. Having sunk most of their pension funds into the operation, the Rescue service relies on donations to survive bit in the summer months when they are scarce, their precarious finances are constantly are Ron’s mind.  They are however not a deterrent as we see him applying to the Bank for a large personal loan to provide urgent cash flow.

Two other issues that Ron is very verbal about is the inequity of what he calls ‘puppy mills’ where dogs are badly housed in small cages and expected to constantly breed to make as much money as possible.  To save money they are often inbred to resulting in unsalable puppies that they will then simply abandon.

Surprisingly his views on Animal Shelters who exterminate were extremely rational, as he explained that in a society where animals are not neutered or spayed leads to so many unwanted litters which are the real culprits here, and not the Shelters that have to deal with society’s messes.

Director Ron Davis paints an affectionate portrait of this affable couple who show none of the usual eccentricities that we associate with people who prefer an excessive amount of animals over any humans.  The film triggers not just your heartstrings, but all those feelings of guilt too which could be alleviated by adopting another stray or at least sending a big fact check to their rescue service.

The only hint of possibly any regret Davis ever shows us is from Danny who has serious health problems and has enjoyed a much longer life than his doctors predicted, and in an unguarded moment mentioned he missed that fact that he and Ron never talked about anything other than the dogs.  We can see his point.