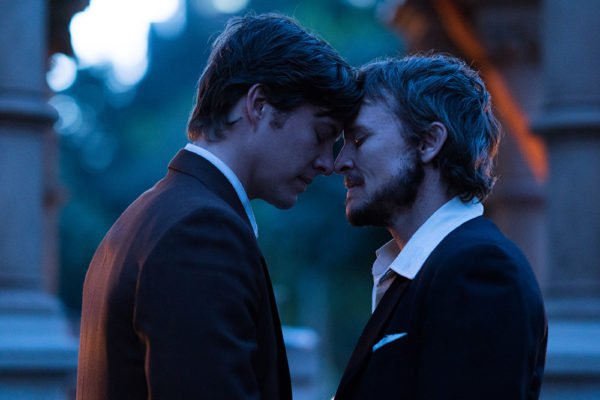 This intriguing made-for-TV Australian drama directed by Jeffrey Walker is based on the real story of how Sydney’s famous LGBT Mardi Gras came into being.  This tale of how a very marginalized community struggled to win acceptance and basic equal rights may be well known to its home audience but is probably news to the rest of the world.

The action starts back in early 1970’s when divorced father-of-three Lance Gowland (Damon Herriman) is now an openly gay man and ardent communist living in a commune and aggressively agitating for gay liberation.  As passionate as he is about ‘the cause’  he finds it enormously difficult to get other gay men involved in any of his political actions.  The other few gay and lesbian activists he does meet up with can never even agree on a common goal and spend most of their time arguing amongst themselves.

However as his bulging address book bares out, one of the things that Lance is definitely good at is finding boyfriends. His latest one Jim (Xavier Samuel) is much younger and a doctor who gives free clinics to women and people who cannot afford to pay. Whilst he doesn’t initially share Lance’s political passion. he does agree with them and is soon roped into helping Lance’s crusades after striking a deal with him to be monogamous in their relationship.

Over the next few years as a determined Lance struggles on with his highly politicized ideology for gay liberation his rigid approach alienates the other activists and eventually Jim who decides to call it a day on their relationship.  However unbeknownst to him whilst he has been leading this rather isolated life from the mainstream, gay life in the city has actually been going through a radical change.

Now Oxford Steet the main drag is teeming with gay bars, and so a friend persuades Lance that the way to connect with this new much younger LGBT community is not with some deadly serious march of protest but with a celebratory parade through town.

This first Mardi Gras is a major success and brings the community out in huge numbers, but it also does the same with the homophobic New South Wales Police.  Despite the fact that Lance had an Official Permit for the Parade, the Police using brute force which landed many in hospital and jail brought a halt to the event

There is a defiant scene at the end when the Parade is over and the Police tell Lance that nothing will change and that as long as the gay community insists on marching they will stop them by whatever means they feel is right.  Lance jibes back “You’ll get shamed out of beating us,” he says, “long before we stop being able to take it”.

This movie with some wonderfully good intentions is far from perfect and probably will have historians seething that a very important part of Australian gay history has been made into a Lifetime TV movie.  However, thanks mainly to Herriman’s pitch-perfect performance at Lance, it does convey with some passion the commitment and the personal sacrifices that these early activists in the gay liberation movement made, and that at least non-scholarly viewers will definitely appreciate.

‹ PrEP Advocate Damon Jacobs: Vaping Can Be Harm Reduction › These Gay Men Created a T-shirt Made of Their Blood to Protest Donation Ban