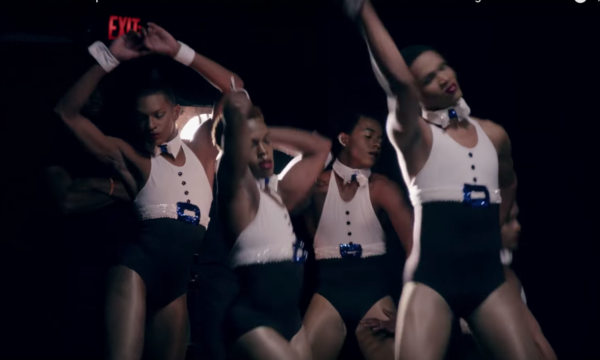 When leading choreographer Jamal Sims came across the underground dance movement known as ‘bucking’, he was so taken with it that he decided that this would be the subject of his documentary directing debut. The result is a wonderfully energetic and a rather joyful movie that centers of a group of dancers,  and one in particular who is known as Big Anthony.

As Sims explains ‘bucking’ was appropriated from scores of female cheerleading troupes in the South by groups of black gay men, who the women now admit, are not only more creative but better at it too.  It was Big Anthony who not only spearheaded the movement in the 1990’s in Atlanta, but he was also the one responsible for creating a network of competitions where the troupes of guys could demonstrate their exceptional prowess.

‘Bucking’ is flamboyant, outrageous and very showy in the same way that vogueing was when it first captured the imagination of the black queer crowd in Harlem.  The documentary however also shows that it is still nevertheless being kept mainly underground because of some of the social stigma in the South attached to men wanting to dance like this.

Big Anthony’s own story is one that adds a particularly touching strand to the documentary especially when he suffers a setback after he’s mugged in a grocery store parking lot.  Plus one of the dancers is a schoolteacher and lives in fear of being exposed as a bucking dancer and fired from his job.  Another, Flash, openly shares his struggles with his mother and her addition to crack which has resulted in her being incarcerated several times. It reminds us of the tough reality of all their lives away from the dance floor.

Despite this behind-the-scenes tension, Sims racks up both the enjoyment and the tension factor by placing his cameras in the midst of the first Big Buck competition.   The standards are exceptionally high but by this time we are so committed to the success of Big Anthony’s Phi Phi team, that we are on the edge of our seats willing them to come out on top.

Openly gay Sims does an excellent job imbuing his own passion for dance throughout the whole film and makes this intriguing and important aspect of contemporary LGBT culture so absolutely compelling to view.

Produced by Jordan Finegan, the movie has Fenton Bailey and Randy Barbato as Executive Directors which will certainly help its chances of being distributed widely

‹ Clinicians: Would You Prescribe Doxycycline to Someone for STI Prevention? › U.S. Supreme Court Ducks Dispute Over Florist Who Refused Gay Wedding Request