June 12 marks two years since a gunman killed 49 people inside the Pulse nightclub in Orlando, Fla.Orlando Mayor Buddy Dyer and Orange County Mayor Teresa Jacobs are expected to attend a ceremony at an interim memorial that opened last month at the nightclub. Equality Florida, a statewide LGBT advocacy group, and the Florida Coalition to Prevent Gun Violence on June 11 will hold a rally at Orlando City Hall in support of gun control.

Organizers of the annual Pride parade in the Puerto Rican capital of San Juan on June 3 held a moment of silence for the victims at the U.S. commonwealth’s first LGBT-specific monument that Mayor Carmen Yulín Cruz formally unveiled two weeks after the massacre.

Nearly half of those who were killed inside Pulse were LGBT Puerto Ricans. The June 3 ceremony took place less than nine months after Hurricane Maria devastated Puerto Rico. 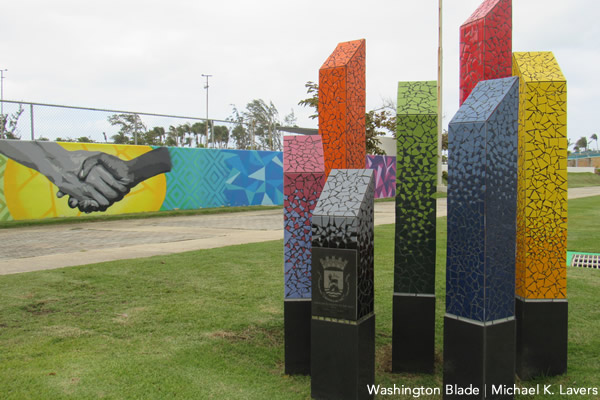 A monument to LGBT Puerto Ricans in Third Millennium Park in San Juan, Puerto Rico. Organizers of the city’s annual Pride parade on June 3, 2018, held a moment of silence for the victims of the Pulse nightclub massacre. (Washington Blade photo by Michael K. Lavers)

Christine Leinonen, whose son, Christopher “Drew” Leinonen, was killed inside Pulse alongside his partner, Juan Guerrero, does not plan to participate in any of the commemoration events. Christine Leinonen described her son as “definitely one of the good guys” when she spoke with the Blade on Tuesday.“He made life easy,” she said. “He made life easy for everyone around him.”

Axel Rodríguez, an Orlando resident who was born in Puerto Rico, was friends with Xavier Serrano Rosado, who was killed inside Pulse.

“I have not forgotten any of the 49 souls that died,” Rodríguez told the Blade on Tuesday. “I will never, ever forget my friend Xavier.”

Rodríguez said he has visited Serrano’s grave in the Puerto Rican city of Ponce. Rodríguez told the Blade he is “still not able to visit” Pulse.

The Associated Press reported the onePULSE Foundation, of which Pulse owner Barbara Poma is executive director, will begin its search for architects who will design a permanent memorial next month. This year’s commemorations are also taking place against the backdrop of renewed calls for gun control.

A gunman on Valentine’s Day killed 17 students and faculty at Marjory Stoneman Douglas High School in Parkland, Fla. The Pulse nightclub massacre had been the deadliest mass shooting in modern U.S. history until a gunman killed 58 people and injured more than 500 others when he opened fire during a country music festival in Las Vegas on Oct. 1, 2017.

Florida Gov. Rick Scott — who, along with state Attorney General Pam Bondi, faced widespread criticism in the days after the Pulse nightclub massacre when they did not specifically mention the LGBT community — after the Marjory Douglas shooting signed into a law a $400 million bill that, among other things, banned the sale of bump stocks and raised the minimum age to buy a gun in Florida from 18 to 21.

Equality Florida CEO Nadine Smith — who is a vocal critic of Scott and U.S. Sen. Marco Rubio (R-Fla.) over gun control and other issues — on Tuesday told the Blade the fact that Scott signed the bill the National Rifle Association opposed “tells you there’s a loosening of” the organization’s “grip.”

Scott’s press secretary, Ashley Cook, in a statement to the Blade noted Scott, who is running against U.S. Sen. Bill Nelson (D-Fla.), in the aftermath of the Pulse nightclub massacre met with survivors and victims’ families “and saw Floridians show their resilience, strength and love for each other.”

“The horrific terror attack at Pulse was heartbreaking,” said Cook. “Governor Scott will always honor the memory of the victims and the loss suffered by their families.”

Cook’s statement did not specifically mention the LGBT community. Rubio’s office did not respond to the Blade’s request for comment.

She and Dru Project Vice President Brandon Wolf, who was with Christopher “Drew” Leinonen and Guerrero when they were killed inside Pulse, marched with a Human Rights Campaign contingent at the “March for Our Lives” that took place in D.C. after the Marjory Stoneman massacre. Christine Leinonen on Tuesday said electing “strong Democrats” and encouraging parents not to keep guns in their homes are among what she described as her seven “practical steps to make us safer from mass shootings.”

“Our homes have been robbed because of gun violence,” Wolf told the Blade on Tuesday.

Christine Leinonen attends the “Disarm Hate” rally at Potomac Park in Southwest D.C. on Aug. 13, 2016. She has become a vocal gun control supporter since her son, Christopher “Drew” Leinonen, and 48 others were killed inside the Pulse nightclub in Orlando, Fla. (Washington Blade photo by Michael Key)

‹ Stay in the Closet at World Cup, Gay Fans Warned › Warsaw Gets ‘Unbreakable’ LGBT Monument for Pride After Vandalism