Russian police on Thursday arrested a prominent British LGBTI rights advocate ahead of the opening of the 2018 World Cup in MoscowA picture the Peter Tatchell Foundation released shows Peter Tatchell holding a sign while standing near the Kremlin that highlighted the ongoing crackdown against gay men in Chechnya. Tatchell was speaking with a police officer as two reporters with microphones stood behind him.

A second picture shows a group of police officers standing around Tatchell before they put him into a police car.

Tatchell said on Twitter after his release from a Moscow police station that he has been charged with violating a Russian law and a presidential degree that “prohibit all protests near the Kremlin” during the World Cup, which began on Thursday. Tatchell said he has been ordered to appear in court on June 26.

“Glad to stand in solidarity with Russian and Chechen LGBTs,” he tweeted.

The British Embassy in Moscow on Twitter confirmed Tatchell’s release.

“Our staff in Moscow are assisting Peter Tatchell who was arrested, and subsequently released, in Russia earlier today,” it said. “We have spoken to the local authorities and are pleased to confirm that he is well and has now been released.”

The World Cup will take place in Russia through July 15.

The 2014 Winter Olympics took place in the Black Sea resort city of Sochi. Russia’s LGBTI rights record — including a 2013 law that bans the promotion of so-called gay propaganda to minors — overshadowed the games.

The Washington Blade will provide additional updates as they become available. 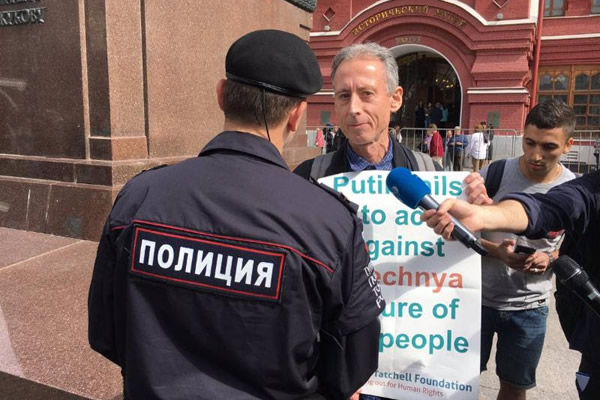 Russian police on June 14, 2018, arrested Peter Tatchell near the Kremlin as he was protesting against the country’s human rights record. The arrest coincided with the first day of the 2018 World Cup that Russia is hosting. (P

‹ ‘Shame Is A Good Thing’: Dave Daubenmire And Crew Will Be Protesting A Mosque, An Abortion Clinic, And A Pride Parade This Weekend › Frameline Film Review: ‘Anchor and Hope’