Gina Ortiz Jones Could Be LGBT Face of 2018 Dem Victories

Change could come to Washington after the congressional mid-term elections in November, and the bid of Gina Ortiz Jones to represent Texas’ 23rd congressional district certainly represents that possibility.

Jones, who recently emerged a victor in the Democratic primary after a run-off in May, is a lesbian first-generation Filipino-American who served as an intelligence officer in the Air Force in Iraq under “Don’t Ask, Don’t Tell.”

In a phone interview with the Washington Blade on Friday, Jones said her campaign is an effort “to protect the opportunities that allowed me to grow up healthy, get an education and serve my country.”

“My own story: I’m a first-generation American, I was raised by a single mother, I know what it’s like to need a little bit of help,” Jones said. “Reduced lunch, subsidized housing — I know why those are important because I actually needed those investments, and those allowed me to get an education.”

Jones also acknowledged her race has significance for the LGBT community. If elected, she’d be the first openly gay person elected to Congress from Texas.

“I’d be honored to be the first, but it is more important that I am not the last. And that’s what this race is about,” Jones said. “It’s about protecting all the opportunities that allowed me even just to get to this place, right? So, we are overdue in terms of representation, and I think we’re seeing every single day just how quickly the progress that we fought for can be ripped away from us if we don’t stand up.”

The Democratic Party seeks to raise Jones’ profile as political observers rank the race for Texas’ 23rd congressional district, a Hispanic-majority district, as a toss-up at a time when progressive energy is high amid frustration and anger with President Trump.

Jones is among the women politicos set to speak Monday at the annual LGBT gala in New York City hosted by the Democratic National Committee, an event she said she’s planning to attend because “now is the time to ensure that your voice is heard.”

“That is a gathering of people who know exactly about the moment of time that we’re in,” Jones said. “Many people in the room have fought so hard for our rights, for our equality. And so, that makes me able to share my own story and talk about what’s going on in Texas and what I’m looking to fight for, and certainly, on behalf of the LGBT community and the opportunity that we have.”

“In the face of sustained Republican efforts to roll back the progress we’ve made, leaders within the LGBTQ community, and LGBTQ women of color in particular, are stepping up, running for office and fighting back,” Acosta said. “Ortiz Jones will be a strong advocate not only for her constituents, but also for the LGBTQ community and for all queer women of color, who deserve a voice in Congress.”

Jones had stern words for Trump, whose administration has worked to roll back LGBT rights despite his promise during the election to be a friend to LGBT people — a promise Jones said he hasn’t kept.

“The answer is that he has not,” Jones said. “He’s anything but a friend. I mean, with friends like that, who needs enemies?”

The anti-LGBT rollbacks in the Trump administration have included a transgender military ban the courts have blocked the Pentagon from enforcing, executive actions for “religious freedom” seen to undermine LGBT rights and exclusion of LGBT people from the enforcement of federal civil rights laws.

With the Trump administration’s separation of migrant families seeking to enter the United States as a result of its “zero-tolerance” immigration policy, Jones — who’s running in a border district – also criticized the administration on that front.

“I think it’s a travesty, it’s inhumane, it’s unjust and we have to get these families united as quickly as possible,” Jones said.

Asked what the policy should be for migrant families seeking to cross the border, Jones cited problems with changes in how immigrants can seek and be considered for asylum, a backlog in judgment of those case and access of legal resources to asylees. 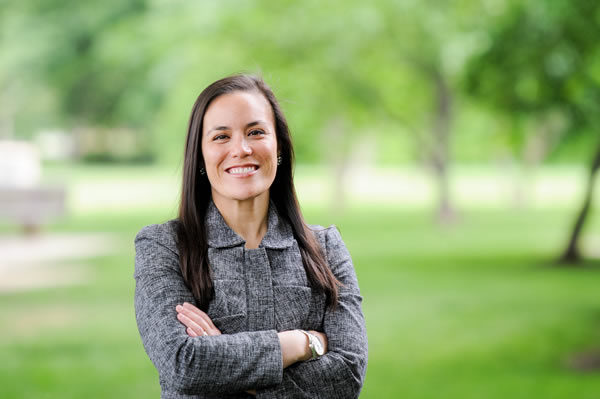 “That’s very concerning that people who may have legitimate cases are not even being able to make the case, right?” Jones said. “That’s not the kind of country we are. So we need much greater clarity on why people are not able to make their case.”

Jones’ opponent in her race is Rep. Bill Hurd (R-Texas), who was the first black Republican elected to Congress from Texas and worked for the Central Intelligence Agency between 2000 and 2009.

Hurd was seated in Congress in 2015, so has only been in Congress a short time, but nonetheless has developed an anti-LGBT record.

In the previous Congress, Hurd was a co-sponsor of the First Amendment Defense Act, federal “religious freedom” legislation seen to enable anti-LGBT discrimination. Last year, Hurd also voted on the floor in favor of an amendment that would have barred the U.S. military from paying for transition-related care, including gender reassignment surgery, for transgender troops.

Jones criticized Hurd for voting for the anti-trans amendment, citing as it as hypocrisy on the basis he claims to support national security “and then takes votes like that that undermine military readiness.”

“As someone that’s served in the military and under ‘Don’t Ask, Don’t Tell,’ I know that if one person on that team is not 100 percent, that unit is not 100 percent and the mission is at risk, so this is now an issue of military readiness,” Jones said.

Jones also said Hurd is “certainly no friend to the LGBT community” because he hasn’t spoken out against rollbacks of LGBT rights under the Trump administration.

“In these times, when you are silent as the most vulnerable in our community are targeted and their rights are stripped from them, you are silent when those you need you the most, that’s just as telling,” Jones said. “He has not uttered one word on behalf of the LGBT community as…our rights are under threat.”

If elected to Congress, Jones identified reversal of Trump’s transgender military ban as a priority in her effort to advance LGBT rights as she recalled her own time in the military having to serve under “Don’t Ask, Don’t Tell.”

Also on Jones’ priority list is expanding federal non-discrimination protections to include a prohibition on discrimination on the basis of sexual orientation and transgender status.

“I think every single day that this administration is intent on rolling back those protections, and they want to leave it up to states to decide, but that’s not how this discussion needs to happen, right?” Jones said. “Americans deserve to have equal access to health care, equal opportunity to serve their country and equal opportunity to provide for themselves and their families.”

Asked if her sexual orientation has come up as an issue during her race, Jones said her now-defeated Democratic primary opponent had accused her of “hiding being a member of the LGBT community, which could not be further from the truth.” Jones said she “actually deliberately brought it up” during her campaign.

This Texas race isn’t the only one of importance to LGBT people. U.S. Rep. Beto O’Rourke (R-Texas) is seeking to unseat Sen. Ted Cruz (R-Texas), who has built a substantial anti-LGBT record that includes introducing a constitutional amendment against the U.S. Supreme Court’s decision in favor of same-sex marriage nationwide.

“For the LGBT community, I think that would actually be more important,” Jones said. “And so, again, we’re certainly hopeful we’ll have change at that level as well. And so, we can do this if we work together, and I think we have to, again. One in ten kids in the country goes to school in Texas, so there’s a lot at stake and we need representation that is going to fight for our kids, not against them.”

With the changing demographics in Texas, political observers have predicted the state will soon become “purple” and maybe even a “blue” Democratic state in years to come.

Jones, however, said the potential for Texas to reverse its longstanding history as a “red” state is “already there” and just needs high voter turnout for it to happen.

“What we need to work on is actually voter turnout. Folks are registered,” Jones said. “So it is, in fact, about turnout, so this is not a red state, it’s a non-voting state, and once we get people voting, this is, I think, a safely blue state. But we just got to get people voting.”

Fentanyl deaths on the rise in Marin and Sonoma counties