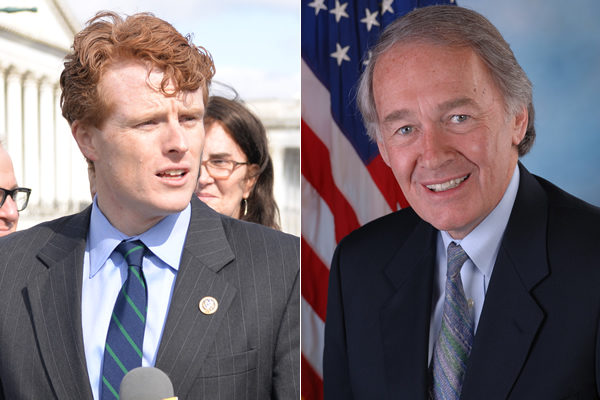 The use of a panic defense to justify anti-LGBT violence in federal court will come to an end if new legislation introduced this week by a pair of Massachusetts Democrats becomes law.

In a statement to the Washington Blade — which has learned exclusively about the legislation — Kennedy said an admission of committing a violent crime against someone because they’re LGBT “is not a defense, it is a hate crime.”

“Legal loopholes written into our laws that seek to justify violent attacks against our gay, lesbian, bisexual and transgender neighbors should never have existed in the first place,” Kennedy said.

Markey said in a statement to the Blade a person’s sexual orientation or gender identity “cannot ever excuse violence, and our courtrooms should not be used as chambers of hate.”

“Gay and trans panic legal defenses reflect an irrational fear and bigotry toward the LGBTQ community and corrode the legitimacy of federal prosecutions,” Markey said. “These defenses must be prohibited to ensure that all Americans are treated with dignity and humanity in our justice system.”

Fear of being hit on by gay men and discovering a potential partner is transgender have been used for decades as a defense in court — either “gay panic” or “trans panic.” In the 1990s, the killers of Matthew Shepard — a gay college student murdered because of his sexual orientation near Laramie, Wyo. — invoked the gay panic defense to justify their hate crimes against him.

There are signs use of the defense continues to this day. Earlier this year, a former police officer in Austin, Texas, received a lighter sentence for stabbing his neighbor in what some called an example of gay panic defense.

James Miller, 69, admitted to stabbing Daniel Spencer, 32. Miller said he rejected a kiss from Spencer when the two met at Spencer’s home in 2015, prompting Spencer to become violent and to charge at Miller with a glass. Miller said he then stabbed Spencer in self-defense.

Reports surfaced Miller invoked “gay panic” defense in his claim, although according to an NBC News report Miller’s attorney denied that and said his client acted purely in self-defense.

The sentence for Miller was for criminally negligent homicide, which carries a lighter sentence than murder or manslaughter. A jury recommended Miller receive 10 years probation, but a judge added six months jail time, 100 hours of community service and $11,000 in restitution to Spencer’s family.

In a letter to Markey dated April 24, the American Bar Association expressed support for the bill on the basis that “gay panic” and “trans panic” legal defenses “are remnants of a by-gone era” when anti-LGBT discrimination was the norm.

“These defenses have no place in either our society or justice system and should be legislated out of existence,” the letter says.

In 2013, the American Bar Association unanimously approved a resolution introduced by the LGBT Bar Association calling for an end to the use anti-LGBT panic defense in court.

The April letter says Markey was set to introduce the bill at that time, but the bill was introduced only this week. A Kennedy spokesperson said there was no reason for delay except for a desire to continue to build support for the legislation before introduction.

The Gay & Trans Panic Defense Prohibition Act includes an exemption that would allow courts “to admit evidence, in accordance with the Federal Rules of Evidence, of prior trauma to the defendant for the purpose of excusing or justifying the conduct of the defendant or mitigating the severity of an offense.’’

The bill also would require the U.S. attorney general to submit to Congress an annual report detailing prosecutions in federal court of crimes committed against LGBT people motivated by their sexual orientation and gender identity.

Although the Gay & Trans Panic Defense Prohibition Act would ban the anti-LGBT panic defense in federal courts, it wouldn’t apply to charges brought in state court.

Some states have acted to ban the use of anti-LGBT panic defense. The first state was California in 2014, where now Sen. Kamala Harris (D-Calif.), then attorney general, pushed a measure in the California state legislature later signed by Gov. Jerry Brown to ban the legal defense. Illinois and Rhode Island have also banned the use of the defense.

‹ Criminalization of Homosexuality is Setting Back the Global Fight Against HIV/AIDS › Book Review: ‘Paper is White’ by Hilary Zaid