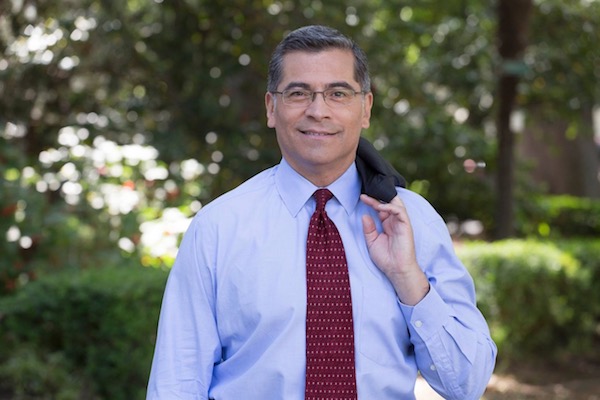 Photo of Attorney General Xavier Becerra from his Facebook page

California Attorney General Xavier Becerra has been an LGBT ally since he first ran for the California Assembly in 1990 representing the 59th District in downtown Los Angeles. Now he is wielding the sword of constitutional righteousness defending all of California from the erratic, irrational and harmful machinations of former New York developer and reality TV producer/star Donald Trump, who is apparently trying to apply his questionable business tactics to running the U.S. government. Trump, Becerra says, is a serious danger to American democracy.

Becerra, who has been prolific in his lawsuits and amicus briefs against the Trump administration since becoming attorney general in March 2017, is no stranger to standing up for the rule of law. Having graduated with his law degree from Stanford University, he went to Congress in 1993 and was one of only 65 Democrats to vote no against the Clinton-backed Defense of Marriage Act in 1996. Twelve years later, on March 27, 2013, Becerra brought his daughter Natalia, with a rainbow ribbon in her hair, to the steps of the Supreme Court as the court heard arguments against DOMA. Originally intending to only be a witness to history, he was spotted in the crowd outside, which was hotly debating gay marriage versus the Bible.

Five years later and the whole notion of simple civility is in shambles, thanks to the divineness of the Trump campaign and 18 months of his shocking presidency. Now, as both Special Counsel Robert Mueller’s investigation into Trump’s possible conspiracy with Russia to influence the 2016 election and a New York state investigation of Trump associates and the Trump organization for possible violations of campaign finance laws, tax evasion and fraud closes in around the president, Becerra is concerned about the lack of congressional oversight and how Trump may react to feeling cornered.

“I think it’s chilling to watch Congress abandon its role to put a check on Donald Trump’s excesses,” Becerra told the Los Angeles Blade by phone Thursday. “I have no hope for Donald Trump. And I think he’s proven himself repeatedly who he is and what he’ll do. When you have someone who’s that much of a rogue and that dangerous a player, you expect the other branches of government to stand up. And here’s where I think I blame those in power in Congress more for being AWOL right now because I think it’s become clear that no one should expect Donald Trump to change and all of a sudden begin to act like a president.”

“In every respect he’s endangering the health, the security, the economic well-being of the people of the country,” Becerra continued. “It’s been a long time since we thought we were this close to having someone press the button that could end up starting some nuclear conflict. But given how erratic Donald Trump is—you just never know what he’s going to come up with next. I think that’s probably as bad as it gets when you get to the point of a nuclear conflict. But the fact that we would even talk about that or believe that could be possible for irrational reasons—it makes you just wonder where are the checks and balances that would make sure that one irrational person could not topple the longest living democracy in history.”

All Are Invited to ‘Aging with Pride: Building A Caring Community Together’ Feb. 9 in Oakland