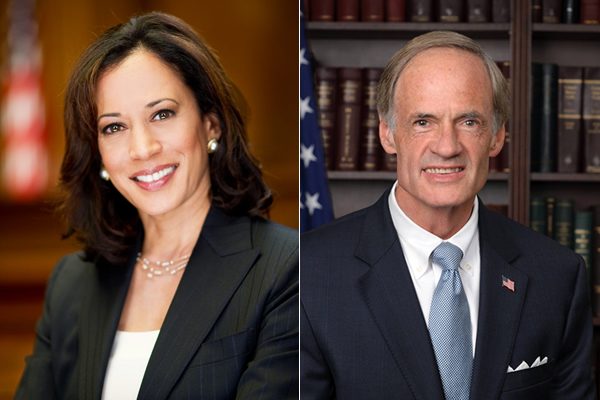 In the wake of the Trump administration’s decision not to allow Americans to identify as LGBT on the U.S. Census, two Democratic senators have introduced legislation that would require those questions in major federal surveys.

Sens. Kamala Harris (D-Calif.) and Tom Carper (D-Del.) announced on Tuesday they had introduced in the U.S. Senate the Census Equality Act, which would begin the process of adding questions allowing respondents to identify their sexual orientation and gender identity in both the decennial U.S. Census and the annual American Community Survey.

Harris said in a statement the legislation is necessary because “the spirit of the census is that no one should go uncounted and no one should be invisible.”

“We must expand data collections efforts to ensure the LGBTQ community is not only seen, but fully accounted for in terms of government resources provided,” Harris said. “This information can also provide us with better tools to enforce civil rights protections for a community that is too often discriminated against.”

Traditionally, the decennial U.S. Census has been a more streamlined questionnaire that seeks primarily to ascertain sheer numbers of the U.S. population. The annual American Community Survey, on the other hand, is longer, has more detailed questions and has been the focus of LGBT groups for some in efforts to include LGBT questions on federal surveys.

Carper said the legislation will assist in efforts “to ensure the information collected by the Census accurately reflects who we are as a society and that everyone is counted fairly.”

“Today, despite the fact that roughly 10 million Americans identify as LGBTQ, the community is left unrepresented on the census,” Carper said. “In order for our government and the businesses that drive our economy to work for the American people, they must have the most accurate and comprehensive data on those they serve.”

Last year, after initially indicating LGBT questions would be included in the American Community Survey in a report to Congress, the Trump administration immediately corrected that, claiming it was a mistake and announcing they wouldn’t be included.

One section of the legislation explicitly instructs the Census Bureau to maintain the same level of confidentiality for the responses to the LGBT questions that the agency uses with sensitive information.

A vast array of pro-LGBT groups are on the record in support of the legislation, including the National LGBTQ Task Force, the Leadership Conference on Civil & Human Rights and the Human Rights Campaign.

Rea Carey, executive director of the National LGBTQ Task Force, said in a statement the legislation “will put the Census Bureau back on the path it initiated two years ago to count LGBTQ people.”

“We call on members of Congress to support a full, fair, and accurate Census by becoming co-sponsors of the Census Equality Act and opposing efforts to add an untested citizenship question to the Census,” Carey said.

The Task Force indicated in a statement the inclusion of LGBT question in the U.S. Census and American Community Survey is important because Congress allocates and distributes $800 billion each year to programs like SNAP, Medicaid, Section 8 housing vouchers and foster care based on the findings.

David Stacy, government affairs director for the Human Rights Campaign, said in a statement the legislation is important to “help address the LGBTQ community’s underrepresentation in federal data collection efforts.”

“It’s absolutely critical that we have the hard data needed to find solutions and address the unique challenges Americans face based on their sexual orientation or gender identity,” Stacy said. “The Census and American Community Survey are crucial tools to meet these needs.”

Although no questions allowing respondents to identify as LGBT will on the 2020 Census, the agency announced earlier this year in a report to Congress it would implement to allow same-sex couples identify themselves and differentiate themselves from different-sex couples. But that move would only allow LGBT people identify themselves in the U.S. Census if they’re in a same-sex relationship.

‹ Reflecting on the Compton’s Cafeteria Riot: Why Transgender History Matters Today › Teacher Raises $70,000 for Gay Student to Go to University after His Religious Parents Throw Him Out