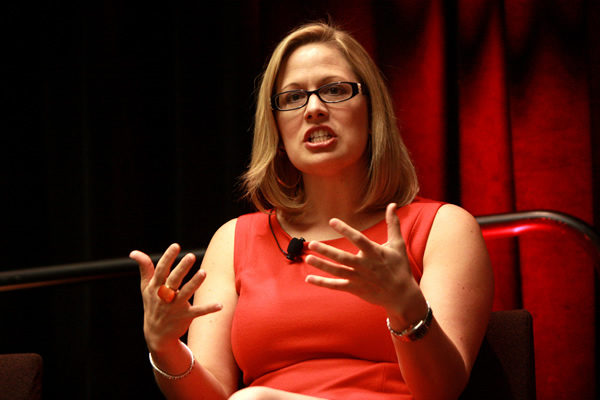 Arizona Rep. Kyrsten Sinema (D-Ariz.) achieved a significant victory on Tuesday in the Arizona primary when she became the first openly bisexual person to win a major party nomination to run for a U.S. Senate seat.The Associated Press declared Sinema, a three-term member of Congress, the winner at 9:21 local time after polls closed in Arizona at 7 pm. Sinema was in a contest against Muslim progressive activist Deedra Abboud for the Democratic nomination to run for the open U.S. Senate seat in Arizona.

With 94 percent of precincts reporting, Sinema won 80.5 percent of the vote compared to the 19.5 percent won by Abboud, according to results from the New York Times.

The primary contest is to run for the seat being vacated by Sen. Jeff Flake (R-Ariz.), who announced he wouldn’t seek another term in the U.S. Senate and remains outspoken with his own party against President Trump. (The other seat representing Arizona in the U.S. Senate after the death of John McCain will be filled by a interim replacement chosen by the Arizona governor and come up for a vote in the general election in 2020.)

As the only openly bisexual member of Congress and co-chair of the LGBT Equality Caucus, Sinema has taken the lead on LGBT issues during her time in Congress. Among other things, Sinema was a co-sponsor of the Equality Act, comprehensive legislation that would prohibit anti-LGBT discrimination in all areas of federal civil rights law and legislation against Trump’s attempted ban on transgender service members.

Representing a moderate district in Congress, Sinema has taken votes in line with the Republican caucus that have angered progressive and LGBT activists. Sinema has never voted for House Minority Leader Nancy Pelosi (D-Calif.) as speaker, voted to delay implementation of the individual mandate in Obamacare and voted for a measure that would have inhibited Syrian refugees from coming to the United States.

Also revealed in the Arizona primary was the Republican opponent whom Sinema would face in the general election. The winner on the Republican side was Martha McSally, a former Air Force pilot who represents Arizona’s 2nd congressional district in Congress.

Other candidates were Kelli Ward, a former member of the Arizona State Senate, and former Maricopa County Sheriff Joe Arpaio, who declared his candidacy after President Trump granting him a pardon for violating the law in his enforcement of immigration law.

Although McSally has served in the U.S. House for only two terms, she has already cast at least one anti-LGBT vote. The Arizona Republican vote in favor of an amendment on the House floor introduced by anti-LGBT Rep. Vicky Hartzler (R-Mo.), which would have the barred from the U.S. military from paying for transition-related care for transgender people, including gender reassignment surgery.

McSally has also opposed interpreting Title IX of the Education Amendment of 1972 to require school to allow transgender kids to use the restrooms consistent with their gender identity, saying during a town hall early last year the matter is best handled at the local level.

In 2016, McSally was also one of the 33 Republicans in committee to vote in favor of an amendment to major defense authorization legislation that would have weakened President Obama’s executive order against anti-LGBT workplace discrimination. Although the committee approved the amendment, it was later taken out in conference deliberations.

Annise Parker, CEO of the LGBTQ Victory Fund, said Sinema “shattered a lavender ceiling” in the primary, but the race against McSally will also be significant.

“This race is consequential not just for the Democratic party and for the LGBTQ community, but for all Americans who demand an end to the political divisiveness that Martha McSally embodies,” Parker said. “An LGBTQ Senate candidate taking down an anti-LGBTQ opponent in a red state will be a defining moment in this year’s rainbow political wave – and will further the evolution in how Americans view LGBTQ people and candidates.”

Sinema wasn’t the only LGBT candidate in a primary race on Tuesday night. Other LGBT candidates were in the fray in Arizona and Florida and had different results:

‘Never Seen a Vagina’: Lindsey Graham’s Sexuality Is a Joke