Rep. Maloney Seeks to Take on Trump as First Out N.Y. Attorney General 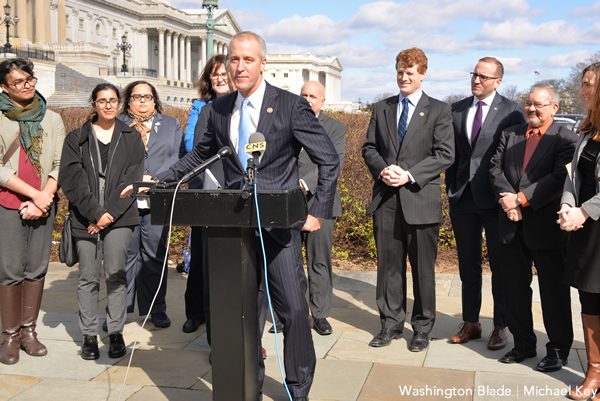 Rep. Sean Patrick Maloney (D-N.Y.) would be the first openly gay person elected as New York attorney general should he succeed in his campaign for the office — and he sees the role as an opportunity to take on President Trump.

In an interview Wednesday with the Washington Blade, the three-term congressman said he wants to go on offense and after winning the primary on Sept. 13 and the general election would “100 percent” use the office of attorney general to investigate Trump and challenge his anti-LGBT policies.

As evidence of hostility from the Trump administration and House Republicans toward LGBT people, Maloney cited Trump’s attempt to ban transgender people from the armed forces as well as efforts to restrict adoption by LGBT couples.

House Republicans have inserted an amendment in major spending legislation that would penalize states and localities for passing non-discrimination policies prohibiting adoption agencies from discriminating against LGBT families. The proposal closely tracks new state laws across the country enabling taxpayer-funded adoption agencies to refuse placement to LGBT homes out of religious objections.

“The Trump administration has families like mine in the crosshairs, and you better believe I’m going to use every tool I have fight back and to get on offense,” Maloney said.

During his three terms in the House, Maloney has had success in protecting LGBT rights despite Republican control of the chamber. In the final years of the Obama administration, the New York congressman played a lead role in stripping from defense legislation an amendment submitted by Rep. Steve Russell (R-Okla.) that would have undermined President Obama’s executive order against anti-LGBT workplace discrimination among federal contractors.

Last year, Rep. Vicky Hartzler (R-Mo.) introduced an amendment that would have barred the U.S. military from paying for transition-related care for transgender troops, but the measure fell short of passage. Maloney said he “successfully got” the 24 Republicans who voted against the measure to make the decision to vote against it.

“We’ve been playing some good defense, but it’s time to get on offense and start winning again,” Maloney said. “I’m sick of the Democratic Party playing defense.”

In addition to seeing opportunities to take on Trump in court, Maloney said he sees his potential victory as a win for LGBT visibility.

“It’s so important that we prove that we can succeed at every level of the political process, and there’s no substitute for having a seat at the table,” Maloney said. “I certainly see that every day as the first openly gay member of Congress from New York. That’s even more true when we’re talking about statewide office, particularly in a big state like New York. It will be a game changer for LGBT participation in politics at the senior level.”

In recent years, the New York attorney general has used the office for high-profile investigations of Trump and his properties, including Trump University and the Trump Foundation.

Asked if he thinks the New York attorney general has the authority to dissolve Trump’s businesses if wrongdoing is found, Maloney said a variety of drastic consequences could unfold.

“The fact is the attorney general has sweeping authority in the area of business crime and consumer fraud,” Maloney said. “So, if you are talking about Trump University, yeah, you could take that thing apart because of the wrongdoing they engaged in. Likewise, depending on the wrongdoing you can prove on the business side, there can be very drastic consequences for a business that’s breaking the law.”

Some possible consequences Maloney cited are massive fines and criminal charges “depending on what the facts and evidence show.”

In the wake of New York Gov. Andrew Cuomo opening the door for a criminal referral against the Trump administration should such action be needed, Maloney said the attorney general “would have extraordinary authority even beyond what exists in current law to investigate Trump’s businesses for criminal wrongdoing.”

“It’s time for real accountability from Donald Trump…on his use of his charity for his own greedy purposes, he’s used things like Trump University to defraud students seeking an education and in every area of his business where he has been getting away with murder for years,” Maloney said. “Now, you have to prove that, and you have to do real work like a lawyer. It can’t just be some political crap. It has to be following the facts and the law, but there’s every reason to believe there’s a lot more work to do and that will be a top priority in my office.”

Maloney also said he’s prepared to join other state attorneys general, such as California Attorney General Xavier Becerra, in litigation against Trump’s ban on transgender military service. The lawsuits have already resulted in court injunctions against enforcement of the policy.

“Working together with them, we have done a lot already to stop that stupid policy,” Maloney said. “I just mentioned the Hartzler amendment. We showed there are not the votes, even in the Republican Congress, to do that crazy anti-gay crap anymore, and attorneys general have played a critical role in defending the constitutional rights of transgender service members.”

Maloney pursues the office of New York attorney general after he has secured the Democratic nomination to run for re-election to represent New York’s 18th congressional district in the U.S. House.

In the event he wins the Democratic nomination to run for attorney general on Sept. 13, Maloney said New York law provides for local Democratic committees to choose a new candidate to run for a congressional seat.

Despite the fact that Trump won a majority of the vote of New York’s 18th congressional district in the 2016 election, Maloney said he’s confident a non-incumbent Democrat will be able to pull off a victory.

“The good news is we’ve got the weakest opponent I’ve ever faced,” Maloney said. “We’re in the best cycle in at least 12 years for Democrats, so we’re going to hold that seat. I haven’t stopped caring about that.”

Maloney’s dual campaigns for attorney general and the 18th congressional district resulted in a lawsuit filed by his Republican opponent for the congressional seat, Jimmy O’Donnell, seeking to remove him from the ballots for both races.

But on Tuesday, the groups behind the lawsuit announced after a court hearing they would drop their challenge to Maloney’s run for attorney general, and instead focus on invalidating his run for re-election to Congress.

Maloney said the news that he would be allowed to remain on the ballot to run for New York attorney general was a victory.

“We always knew that was a loser, and so, we beat him in court yesterday, so there are no challenges remaining to my race for attorney general,” Maloney said. “We will be on the ballot on Sept. 13.”

Early polling has shown the race is wide open. A Quinnipiac poll last month found 42 percent of New York Democrats are undecided. James has support from 26 percent, followed by Maloney at 15 percent, Teachout at 12 percent and Eve at 3 percent.

Although Maloney has a record of work as a three-term member of Congress, he may face a challenge from his opponents with less experience promising to shake things up. After all, Rep. Joe Crowley (D-N.Y.) was defeated in an earlier recent primary in New York by challenger Alexandria Ocasio-Cortez even though Crowley had a significantly greater war chest.

Maloney scoffed in response to the suggestion that progressive voters may be more attracted to his competition in the race for attorney general, saying, “I don’t know what you’re talking about.”

“I think the fact is that the Democrats I’ve talked to want something real and different,” Maloney said. “They’re sick of the same old shit, they’re sick of people phoning it in, they don’t want a bunch of political bosses and insiders telling them who’s going to hold political office. They want something new. They want a new Democratic Party that has some backbone and some energy behind it, and that’s what I’m offering.”

After all, Maloney said, his record fighting Republicans in Congress and anti-LGBT proposals speaks for itself.

“My message to progressives and moderates or anybody else is that you need an experienced attorney who has been in the fight with Donald Trump, who has beaten him in three of the toughest congressional districts in the country, who beat them in court yesterday, who’s been beating them on the floor of the House of Representatives on real issues like protecting transgender service members, where it wasn’t easy, and yet we won, and that’s exactly the kind of person we want for what is going to be a cage match with Donald Trump,” Maloney said.