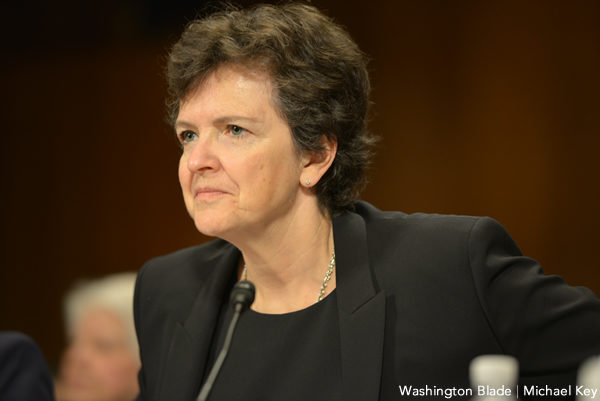 In contrast to other judicial nominees of President Trump with anti-LGBT records, Mary Rowland — an out lesbian — enjoyed bipartisan support Wednesday during a breezy confirmation hearing.Trump nominated Rowland, who has served a federal magistrate judge in Illinois since 2012, in June for a seat as a district judge in the U.S. District Court for the Northern District of Illinois, making her the only openly LGBT pick out of about 140 of his judicial nominations.

Introducing Rowland before the committee, Duckworth said the nominee’s “reputation in the legal community is impeccable” and those who her “commend her good temperament, intelligence and fairness.”

Duckworth also referenced Rowland’s affiliation with LGBT legal groups, which includes being member of the Lesbian & Gay Bar Association of Chicago and pro bono work for Lambda Legal, as well as her longtime spouse, Julie Justicz, and their two adult children who are starting a new year of school.

Durbin praised the process in which of each of the nominees before the committee — three of whom named for seats in Illinois — were headed toward in the confirmation after being nominated by the White House and receiving “blue slip” from both home state senators — a Senate tradition that has gone by the wayside during the Trump administration.

“That’s the way the process is supposed to work,” Durbin said.

In her opening statement, Rowland recognized her spouse and children and spoke reverentially about her father, whom she said died 10 years and inspired her to become a lawyer based on his appreciation for the profession in his role as an attorney.

“I knew before I knew what a lawyer was that I wanted to be a lawyer because I wanted to be like my dad,” Rowland said. “He taught my brother and I a deep respect for the rule of law, he taught us how to do undo others, he taught us about humility and most importantly he taught us never to lose a sense of humor about ourselves. I know that it is because of him that I am sitting here today.”

The vitriol during the committee hearing was mostly reserved for a nomination not present before the senators: Brett Kavanaugh, Trump’s choice to replace former U.S. Associate Justice Anthony Kennedy on the U.S. Supreme Court.

“Make no mistake: This flawed and suspect process does not meet our constitutional mandate to advise and consent,” Durbin said.

Sen. Mazie Hirono (D-Hawaii) announced she’d cancel her scheduled meeting that day with Kavanaugh and urge the Senate to halt his confirmation process in the wake of the guilty plea of Trump lawyer Michael Cohen, who now says Trump instructed him to pay hush money to women in violation of campaign finance law.

Tough questioning was posed to Jonathan Kobes, a nominee for the U.S. Eighth Circuit Court of Appeals, and Kenneth Bell, a nominee to become a U.S. District Judge in North Carolina, about their past writings years ago on immigration and abortion, although the nominees said their personal views wouldn’t influence their decisions senators acknowledged as judges to inferior courts, they couldn’t overturn Roe v. Wade.

In contrast, Rowland often faced softball questions, such as one inquiry Sen. John Kennedy (R-La.) on what Supreme Court decision outside of Roe v. Wade and Brown v. Board of Education had the biggest impact on American society. Rowland’s answer was Marbury v. Madison, the 1803 decision that established judicial review.

Sen. Thom Tillis (R-N.C.) questioned Rowland about how she sees the difference of her experience being both a lawyer and a judge, which prompted the nominee to define a change as initially a “challenge,” but one to which she adjusted.

“At some point, I had to put a note on my bench saying you are no longer the lawyer because you can hear yourself talking out loud, ‘Well, you could argue it this way and what if you said it that way,’ and, of course, you’re not permitted to make arguments for lawyers anymore,” Rowland said. “It is also though a pleasure of being in a position of being unbiased and giving parties, both sides a fair shake, listening to what they have to say, and actually being in a position of helping them resolve the case.”

Not once during the confirmation hearing did any senator question Rowland about LGBT issues or object to her being out lesbian.

In fact, the biggest problem for Rowland during the confirmation hearing might have been her microphone. Perhaps because of technical difficulties, Rowland was twice instructed to turn on her microphone as she was responding to questions from senators.

Annise Parker, CEO of the LGBTQ Victory Institute, said her organization supports the confirmation of Rowland because she’s a marked contrast from other anti-LGBT Trump nominees

“Mary Rowland is well-respected by the LGBTQ community in Illinois and we are pleased that someone with her experience and integrity was nominated,” Parker said “Judge Rowland is President Trump’s first openly LGBTQ judicial nominee out of the approximately 140 he’s put forward – depriving the bench of talented LGBTQ justices in favor of judges with strong anti-LGBTQ records. Mary is a bright exception to this unfortunate pattern – and we are proud to support her.”

According to her White House bio, Rowland prior to becoming a magistrate judge spent 12 years as a partner in the Chicago-based firm Hughes, Socol, Piers, Resnick & Dym, Ltd and served 10 years in the Chicago office of the federal defender.

The White House didn’t respond to the Washington Blade’s request to comment on whether Trump is proud to name an openly lesbian judicial nominee.

25 Gay Men Could Have Been Killed by Indiana Serial Killer

‹ Tammy Baldwin in Dead Heat with GOP Opponent in Wis. Senate Race › Why Are so Many of Us Closeted at Work?