Senate Democrats sought to put the brakes on Brett Kavanaugh’s nomination to the U.S. Supreme Court Monday as they called for a delay in proceedings on a contentious first day of his confirmation hearings.

The partisan breakdown on the Senate Judiciary Committee was clear as Democrats decried the absence of available material — an estimated 100,000 pages — from when Kavanaugh was staff secretary at the George W. Bush White House and Republicans insisted the nominee’s 12-year record as a judge on the U.S. Circuit Court of Appeals in D.C. offered enough insight about his judicial temperament.

For his part, Kavanaugh in his opening statement humbly positioned himself as a family man and a “pro-law” judge who would give both sides a fair shake when cases came before him at the Supreme Court.

“If confirmed to the Supreme Court, I would be part of a team of nine committed to deciding cases according to the Constitution and laws of the United States,” Kavanaugh said. “I would always strive to be a team player on the team of nine.”

Immediately after Senate Judiciary Committee Chair Charles Grassley (R-Iowa) gaveled the panel into session, Sen. Cory Booker (D-N.J.) called for a delay in proceedings until the missing information from Kavanaugh’s time at the Bush White House — blocked by the Trump administration — could be made available.

“What are we hiding by not letting those documents come up?” Booker said. “This committee is a violation of the values that we as a committee have striven for: Transparency.”

Sen. Richard Blumenthal (D-Conn.) called on Grassley to adjourn the hearing. When the Iowa Republican denied the request, cited a rule requiring a vote on adjournment when one was requested. Grassley said the rule only applies to executive session, which the committee wasn’t in for the Kavanaugh hearings. Blumenthal retorted there was nothing in the rules preventing Grassley from taking a vote on adjournment.

Defending the process, Grassley said the committee had enough material to review despite the absence of material from Kavanaugh’s time as staff secretary, asserting the committee had five times more information than the last five Supreme Court nominees combined.

“That’s no reason to delay the hearing,” Grassley said. “We have received and read every page of Judge Kavanaugh’s extensive public record. This includes 12 years of his judicial service on the most important federal circuit court in the country, where he authored 307 opinions and joined hundreds more amounting to more than 10,000 pages of judicial writings.”

LGBT groups have joined Senate Democrats in objecting the withholding of information on Kavanaugh during his time as staff secretary, questioning the degree to which he was involved at the time in Bush’s push for a U.S. constitutional amendment that would have banned same-sex marriage nationwide.

The LGBT legal group Lambda Legal announced on Monday it had followed-up an unanswered Freedom of Information Act request pending before the White House Office of Management with a federal lawsuit seeking information on Kavanaugh’s involvement with the initiative.

Sharon McGowan, chief strategy officer at Lambda Legal, said the missing documents are “a black hole of critical information” and said proceeding with the hearing was irresponsible.

“The George W. Bush White House was one of the most homophobic administrations in recent history, and Brett Kavanaugh was at the center of the action” McGowan added.

The lawsuit is now one of several seeking information on Kavanaugh, including which also include lawsuit filed by “Fix the Court” seeking document on the nominee’s time at the Bush White House and as assistant to U.S. Special Counsel Kenneth Starr during the Clinton administration.

Even before the hearings began, demonstrators — many of whom objected to the perceived threat that Kavanaugh’s confirmation posed to abortion rights — sought to disrupt the proceedings with interruptions. At least one shouted the refrain, “Stop Kavanaugh!” One protester affiliated with “Code Pink” held up a sign reading, “Roe-Yes, Kava-Nope.” 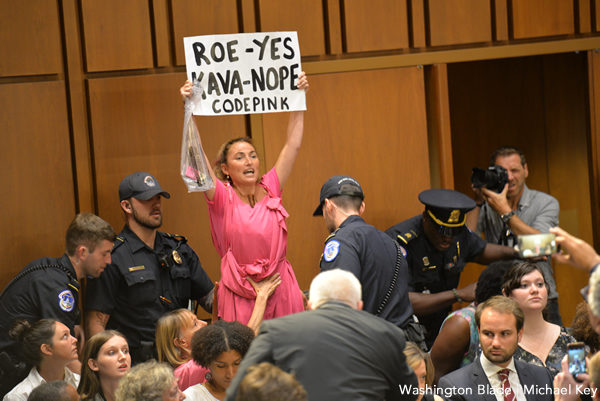 The disruptions annoyed Republican members as they attempted to defend the nomination process amid criticism from Democrats — and even Sen. Patrick Leahy (D-Vt.) expressed irritation at one point — but Grassley continued with the hearing.

The committee didn’t proceed with questioning on the first day of hearings, which Grassley said would begin on Tuesday. LGBT issues came up only in the capacity of Senate Democrats warning Kavanaugh’s confirmation would have strong implications on issues such as same-sex marriage and protections for LGBT people at the workplace.

Sen. Kamala Harris (D-Calif.) brought up potential LGBT issues Kavanaugh might be forced to adjudicate as she expressed concerns about the nominee’s confirmation to the Supreme Court.

“We’re talking about the impact that one individual on that court can have, impact on people you’ll never meet and whose names you will never know,” Harris said. “Whether a person can exercise their constitutional right to cast a ballot — that may be decided if Judge Kavanaugh sits on that court — whether a women with breast cancer can afford health care, or is forced off life-saving treatment, whether a gay or transgender worker is treated with dignity, or may be treated as a second-class citizen, whether a young woman who got pregnant at 15 is forced to give birth, or in desperation go to a back alley for an abortion, whether a president of the United States can be held accountably and whether he’ll be above the law.”