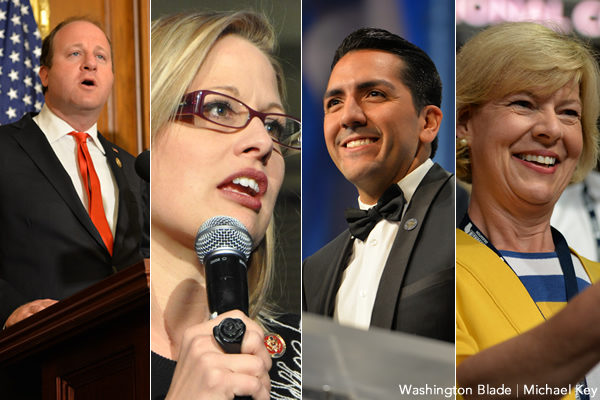 With the 2018 congressional mid-terms fast approaching, a record number of LGBT candidates are seeking election to all levels of government ranging from federal office to state attorney general, many under a banner of challenging President Trump.

Amid expectations of a “blue” wave of Democratic wins in November, political observers say wins for these LGBT candidates constitute a “rainbow” wave and break pink ceilings in races where no LGBT candidate has won before.

Annise Parker, a lesbian former mayor of Houston and CEO of the Victory Fund, said in an interview with the Washington Blade her organization endorsed slightly half of “an unprecedented number” of more than 430 openly LGBT candidates running this cycle.

“It’s part of a larger surge of candidates who are women candidates, who are people of color, candidates who are from immigrant communities — all of whom feel they are under attack and want to have a place in the political process to push back on some of the rollbacks on civil rights,” Parker said.

Another factor in having a record number of openly LGBT candidates running for office, Parker said, is the success enjoyed by previous LGBT candidates who sought office and won elections.

In the aftermath of the 2018 primary season, the Democratic National Committee is claiming an even broader number of at least 126 LGBT candidates this cycle as a result of these hopefuls winning the Democratic nomination in their states.

Democrats also nominated at least 101 openly LGBT non-incumbents for state legislative seats across 32 different states and U.S. territories, according to the DNC.

Lucas Acosta, director of LGBTQ media for the DNC, said the party is proud of the number of LGBT candidates running under the Democratic banner this election cycle.

“In 2018, LGBTQ Democrats are stepping up to the plate, making history, and breaking records,” Acosta said. “Our community deserves a seat at every table and a voice in every legislature. Too often, decisions about us are made without us. That’s why the DNC is excited to support LGBTQ candidates up and down the ballot across the country.”

Many of these LGBT candidates would achieve significant milestones by winning elections no LGBT person has won before:

Parker said LGBT candidates are “achieving milestones just by sheer number of people running,” but particularly in those gubernatorial races.

“With four candidates interestingly representing every aspect of the alphabet — lesbian, gay, bisexual and transgender,” Parker said. “We’ve broken a milestone just by them becoming nominees whether or not they win in November.”

Parker said the LGBT women candidates are poised to make great strides in the upcoming election as female candidates generally have won over male contenders in the 2018 primary season. Among them are Gina Ortiz Jones, a lesbian Air Force veteran running for Congress in Texas, and Angie Craig, who’s running for election to Congress in Minnesota after losing by one point in 2016.

“Whether lesbian or bisexual or straight, women candidates are outperforming male candidates in most races,” Parker added.

The Victory Fund — which as a bipartisan organization has traditionally endorsed Republican LGBT candidates as long as they support LGBT rights — has thrown its support behind five GOP contenders this cycle, four of whom will be on the ballot in November.

But Parker said the number and nature of LGBT candidates running on the Republican ticket has declined from previous years.

“There was a slow rise of Republican congressional nominees,” Parker said. “For example, in 2012, there was one, in 2014, there were two, in 2016, there were three. Unsuccessful, but they were running. This year there were none.”

Parker attributed the lack of LGBT candidates running under the Republican banner to the anti-LGBT policies of the GOP and Trump administration.

“It’s not there aren’t LGBT Republicans,” Parker said. “I think the Republican Party is making it harder and harder for mainstream, fiscally conservative, socially liberal candidates to get elected and there are candidates either choosing to stay closeted or switch parties or not run.”

“There were a number of gay Republicans running for federal office this year, all of whom Log Cabin Republicans was tracking; unfortunately none emerged victorious in their primaries,” Angelo said.

Significant attention is also being placed on transgender candidates, who previously had infinitesimal representation in public office. That changed in 2017 after Virginia State Del. Danica Roem (D-Manassas) became the first openly transgender person elected and seated to a state legislature and other transgender candidates won in local races.

The Victory Fund has endorsed 11 transgender candidates this cycle, eight of whom will be on the ballot in November. The most high profile is Hallquist’s quest for the governorship in Vermont.

Parker credited Hallquist for being nominated in “the highest level race” for a transgender candidate and being “a well-qualified candidate, very comfortable with the issues in Vermont and well known in the state.”

“The fact that voters in Vermont got behind an openly trans candidate in a big way and carried her to a primary victory and positioned her to be the Democratic nominee as governor is…a new milestone for the community,” Parker said.

But being nominated for public office is one thing and winning the election is another. Many of these LGBT candidates face daunting odds in winning election in November and may have to rely on the boost from the expected “blue” wave to achieve victory. Among them is Hallquist, who’s running against a popular GOP incumbent in Vermont.

In Texas, a Quinnipiac poll found Valdez is significantly behind Gov. Texas Greg Abbott, who as part of a significant anti-LGBT record made an unsuccessful attempt at passing anti-trans bathroom legislation a priority. Abbott leads Valdez 58–39 percent among likely voters.

Parker cautioned against placing too much emphasis on the need for these candidates to win election to make an impact.

“Don’t discount the fact that they run and whether or not they win or lose,” Parker said. “If they run good races and address issues important to their constituents, they are plowing the ground for the next wave of candidates, and the next and the next.”

Still, Parker acknowledged wins for these candidates would be significant, especially if they’re part of a “blue” wave that wins a majority in the U.S. House, or even the U.S. Senate, in November.

“Many of them are in marginal seats, ‘red’ to ‘blue’ seats,” Parker said. “If they win their seats, they’re going to be part of the Democratic wave that looks poised to sweep into Washington and if there’s a change in leadership in the House of Representatives, it creates a whole new ball game.”

25 Gay Men Could Have Been Killed by Indiana Serial Killer