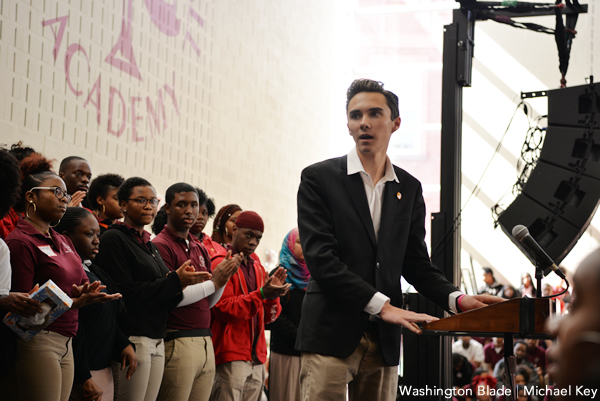 Activist David Hogg is among those participating in the U.S. Conference on AIDS. (Washington Blade file photo by Michael Key)

The annual 2018 United States Conference on AIDS, one of the nation’s largest gatherings of experts involved in HIV prevention and treatment efforts, is expected to draw more than 3,000 participants on Sept. 6-9 to the Hyatt Regency Hotel in Orlando, Fla.

The D.C.-based national HIV/AIDS advocacy organization NMAC, which organizes the annual conference, says the 2018 conference will cover a wide range of HIV-related topics, including a session on activism.

“Our opening plenary is focused on the importance of activism,” said NMAC Executive Director Paul Kawata in a statement. “Activism in the fight against HIV intersects many communities: youth, LGBTQ, elders, and communities of color,” he said. “We want to show how different activist movements can intersect with the fight against HIV and strengthen our forces for change.”

In a statement released last week, NMAC announced that prominent entertainers and veterans as well as younger activists of various progressive movements would be participating in the opening plenary session as well as in later sessions.

Among them is legendary disco diva Thelma Houston, who will give a special performance in honor of disco great Sylvester. Also scheduled to perform is the Kinsey Sicks, who are billed as “America’s Favorite Dragapella Beautyshop Quartet,” according the NMAC statement.

Also scheduled to appear and speak on video is Larry Kramer, the internationally acclaimed playwright and co-founder in the early 1980s of New York’s Gay Men’s Health Crisis and the AIDS protest group ACT UP.

Chip Lewis, NMAC’s communications director, said the names of participants in more than 150 individual conference workshops would be announced on Friday.

Titles of the workshops, which will take place over three days in nine concurrent workshop sessions, are listed on the conference’s website. Several of them address the nation’s opioid crisis and how it impacts people under treatment for HIV.

A number of the workshops address issues affecting men who have sex with men of color, one of the population groups that the U.S. Centers for Disease Control and Prevention says has the highest rate of HIV infection in the nation.

Further information about the conference and the workshop speakers scheduled to be announced on Aug. 31can be accessed at 2018usca.org.