Born in Texas and raised in Augusta, Georgia – Billy Anderson is stand-up comedian currently living in Los Angeles. Billy can be heard on Audible’s “Sounds Like America” hosted by Jackie Kashian and seen on season 3 of the syndicated program “Laughs” on Fox television. In 2017 he released his first live comedy special titled “America’s Sweetheart” through The Harmon Brothers’ VidAngel Dry Bar Comedy series. Billy has written for Cracked.Com, performed in SF Sketchfest, was a finalist in the 2016 Seattle International Comedy Competition and as of 2013 he has performed stand-up comedy in every US state 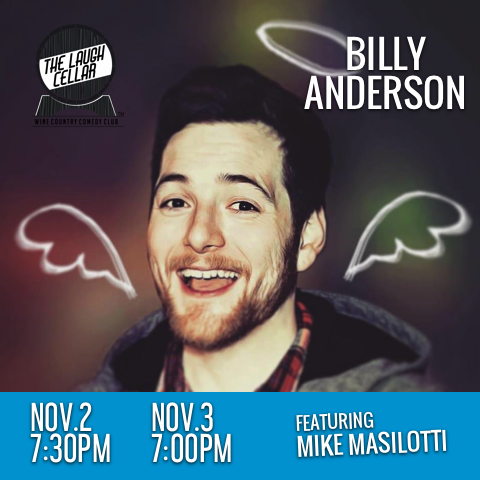 .
Featuring Mike Masilotti
He recently had a video of him doing stand up get over 4 million views! Mike also enjoys going on the road and has performed stand up comedy in 9 states (Washington, Oregon, California, Colorado, Arizona, Nevada, Idaho, Florida and Hawaii) and also in Canada!
He’s  a regular at the Comedy Underground and in his mothers heart.
NOVEMBER 2nd SHOW
Charles Krug Winery
2800 Main Street St. Helena, CA

Ticket Refunds offered upon cancellation or reschedule of show by The Laugh Cellar.
No video during the show

Delicious bar bites and full bar in the lounge. Table Service before and during the show.

Before the curtains go up, enjoy dinner at The Terrace Grill at the Flamingo Resort.
Show proof that you’re attending that evening’s show, and receive a complimentary dessert to share!
(limit one dessert per table) DINNER RESERVATION REQUIRED:  (707) 523-4745

Parking
The hotel offers complimentary parking in their lot.  There is also open street parking available directly in front of hotel.
You may park in the lot across the street. However, please do not park in the front spaces of CVS or iHop.

All shows are 21+
Valid Photo ID Required.
All Ticket Sales are Final
Ticket refunds are only offered upon cancellation or reschedule by The Laugh Cellar.
No video during the show