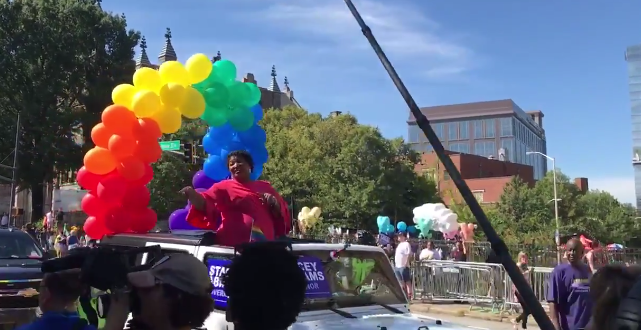 Stacey Abrams emerged from her SUV on a busy Midtown Atlanta street corner on Sunday with a declaration to make to the throngs of voters attending the Atlanta Pride Parade, the annual celebration of LGBT rights in the heart of the city. “We’re here because we stand together, because we know that allies do not run from fights. And because we know we all have pride in Georgia,” she told cheering supporters, adding: “We stand with you and not against you.”

Shortly after, she became the first major-party nominee for governor to march in the parade, a vibrant spectacle that attracted just about every major corporation in Atlanta, dozens of political candidates and tens of thousands of Georgians. Her contingent, led by a group that included U.S. Rep. Hank Johnson and former 6th District hopeful Jon Ossoff, hoisted rainbow-colored flags and stark-blue Abrams signs.