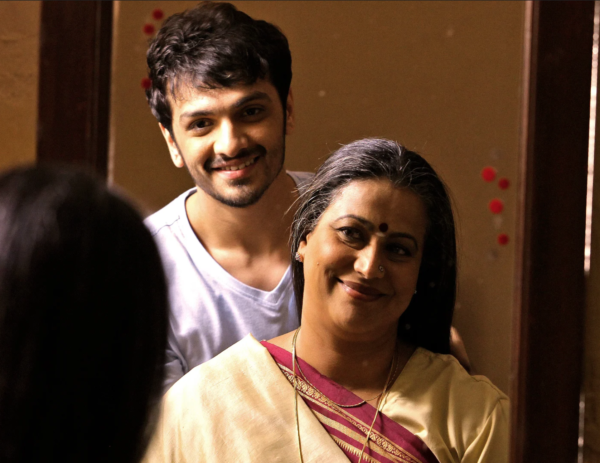 The timing could not be more perfect for the screening of Indian  filmmaker  Sridhar Rangayan’s  beautifully nuanced family drama coming so soon after his country’s Supreme Court finally legalizing homosexuality.  Being gay waa always taboo in India but never a crime in itself,  but the sexual act between two men was.

This is the story of Kartik (Devansh Joshi) who is returning for a rare visit home to his conservative family in a small town in southern India.  Against his father’s wishes he has settled in Mumbai and established himself as a professional photographer and now lives with the love of his life Aman (Arpit Chaudhary).  The last part is something he has not shared with anyone, but he is hoping that may now change.

Kartik believes that the reason for his visit is to take part in a religious ceremony at home, but the moment he walks through the door he is hijacked by his father (Ananth Narayan Mahadevan) for the real purpose of being forced into an arranged marriage.

As an only son he is rather spoilt and protected by his mother  (Mona Ambegaonkar) but there is little she can say or do once the overbearing father has made up his mind, and so all hell breaks out.

Kartik ends up eventually coming out to his mother which doesn’t go too well at all, but when his father finds out by accident, he gets beaten up and literally thrown out of the house.

Kartik’s sexuality is more than just a thorny subject in this extremely traditional society, so kudos to  Rangayan for not suddenly making the parents immediately accepting of it, but equally important never demonising them at all for either their beliefs or reactions.

This is essentially the story about the loving bond between a mother and her son and how in reality it never ever can be broken.  Plus the fact that excellent performances also from both these actors in particular raises the whole piece.

Like most LGBT movies made in India it probably had a miniscule budget and was shot mainly on the downlow.  Hopefully that will start to change as Indian culture slowly embraces the banning of the old law, and hopefully we will see more compelling stories as good as this from there.

P.S. Queerguru would love you to bits if you did us one tiny favor.  Despite the fact that we have had almost 308K hits on YouTube (yeah!) they will not give us a single cent of the advertising money that they make off us until we have more subscribers.  Won’t cost you a dime,  but it will help support our site. Just simply click on the link below.  Thank you very much!