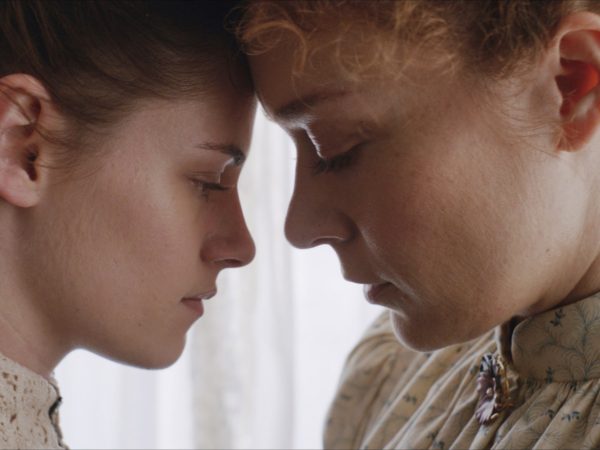 It’s no secret that Lizzie Borden hacked her wealthy parents to death in 1892 but was never ever convicted of the crime, There have been endless stories mainly based on rumors and suppositions ever since, and this new biopic on her life tops them all off by painting Lizzie as being motivated by her lesbian relationship with a maid who her father had been raping on a regular basis.

Lizzie (Chloë Sevigny who had also been the driving force to get this movie made) is portrayed as a fiercely independent heiress who didn’t care for her stepmother (Fiona Shaw) and loathed her crooked manipulating father (Jamey Sheridan). In fact under his regime every woman in the household was miserable including Lizzie’s older spinster sister  Emma (Kim Dickens).

When Bridget (Kristen Stewart) the new maid arrives to join the household she catches the eye of father and daughter.  He imposes himself on her at night when she is sleeping in her attic room, but with the seemingly sexually inexperienced Lizzie it’s a case of first love blooming slowly.

At the same time that the two women start to get serious about each other, the father who has been receiving anonymous threats to his life, invites his unscrupulous younger brother (Denis OHare) to take charge of his affairs and finances should anything ever happen to him.  The fact that he could now be in a position to squander Lizzie’s fortune is just the final straw for her.

Sevigny brilliantly plays her as cool as a cucumber who never outwardly shows any sign of her inner rage. By stripping naked before she takes the axe to her parents she ensures there is no trace of their blood on her, and she is calm enough to ensure that she kills the stepmother first so there can be no complications with the inheritance from her father.  She and Stewart have perfect chemistry together as a pair of young lovers who have been thrown together more by circumstances than just by mere passion.

How much of the story is based on the truth is anyone’s guess, but on reflection making it a fated  lesbian romance seems an inspired decision, and fully credit to Sevigny for pursing this movie  ….. directed by Craig William Macneill from a script by Bryce Kass…..to this conclusion.

P.S. Queerguru would love you to bits if you did us one tiny favor.  Despite the fact that we have had almost 308K hits on YouTube (yeah!) they will not give us a single cent of the advertising money that they make off us until we have more subscribers.  Won’t cost you a dime,  but it will help support our site. Just simply click on the link below.  Thank you very much!