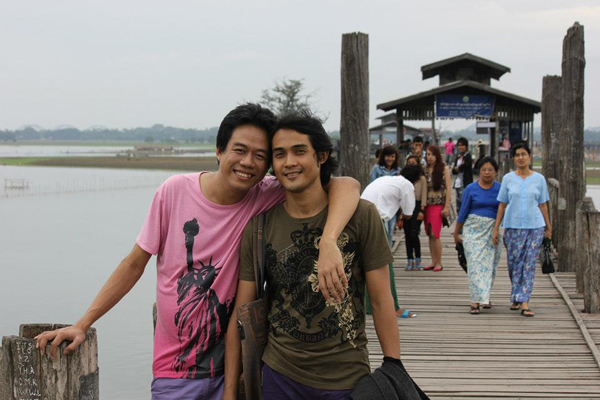 YANGON, Myanmar — The LGBTI community in Myanmar has demand fair media coverage of a gay man with HIV who is charged under the controversial Penal Code 377 for allegedly committing sexual abuse against one of his employees.The accused, Aung Myo Htut, aka Addy Chen, is an outspoken LGBTI rights advocates and commonly known to be HIV-positive. Chen, who also owns a restaurant in Yangon, allegedly asked one of his waiters to give him a massage and sexually assaulted him in March.

Chen was arrested on the same day the man who accused him of sexual assault filed a case against him at a local police station. Chen was charged under Section 377 of the national penal code, which makes same-sex sexual acts illegal, regardless if they were consensual or not.

Chen faces of a sentence of between 10 years to life in prison if convicted.

The media’s portrayal of LGBTI people in Myanmar is unfavorable, adding to deeply rooted social stigma and stereotypes against sexual minorities and people living with HIV/AIDS. LGBTI rights advocates in the country say the portrayal of Chen’s case in the mainstream media is biased against the accused and is very damaging to the LGBTI population as a whole.

“We do not see any media ethics here,” says Yaya Aye Myat, a well-known transgender activist. “Many media reports Addy Chen’s case as if he was already convicted. That makes the public outrageous. In fact, a person is not guilty until proven by the court of law and until then, the person is entitled to the benefits of doubt.”

Chen’s accuser emotionally said he is just a poor rural boy trying to earn a living in the city to support his siblings. He added Chen ruined his life because he may have been infected with HIV after having unprotected sex.

The restaurant manager, who helped Chen’s accuser to file the case against Chen and is also one of the key witnesses against him, also appeared in the video that has had 1.9 million views and 24,000 shares on the Irrawaddy’s Facebook page.

Other Burmese language media outlets followed up in Chen’s case after the video went viral.

Many people find the allegations against Chen outrageous and are demanding harsh punishment for him, even though a court has not found him guilty. Chen’s accuser in the video showed HIV-preventative drugs he has been taking as suggested by a doctor, but tabloid media has mistakenly described them as antiretroviral drugs, assuming he is already HIV-positive.

Chen’s family deactivated his Facebook page within a week of his arrest because of an overwhelming number of hate messages, derogatory comments and even death threats that he received.

Nay Oo Lwin, a gay rights advocate in Myanmar, says the LGBTI community is against sexual assault, regardless of whether the perpetrator is gay or straight. Lwin added he wants to see a fair trial in Chen’s case.

“We respect the rule of law but we don’t want to be repressed by the laws,” he said. “I feel that the media reports on Addy Chen’s case and discussions on social media are attacking the gay community and intensifying the stereotypes.”

Although the mainstream media reports unanimously describe Chen as guilty, the recent court testimony suggests the opposite.

Media reports also did not report the fact the restaurant manager and witnesses who testified owed a significant amount of money to Chen. They are now postponing payment of these debts due to the trial.

“Addy trusted the manager girl and loaned her lots of money,” said Chen’s relative, Myo Min Latt. “All six witnesses summoned by the plaintiff are debtors to Addy Chen. We have documents that Addy loaned them money. They also admitted to owing money to Addy during the court hearing.”

The defendant’s attorney says she believes her client never abused any of his staff except for asking his accuser to give him a massage. She said the alleged victim has exploited the fact that Chen is a gay man living with HIV to frame him as an abuser.

Despite this evidence, the trials continue.

Chen’s request for bail was denied for the third time on Oct. 30.

Chen’s family says his health is now deteriorating in prison. They say he only has limited access to medicine and medical facilities that people with HIV need.

“He has been detained in prison for eight months so far,” says Latt. “He is already very depressed by the media portrayal of him as gay rapist. He is now getting frequently ill. The trials are going on although the court physician had testified of not finding any signs of abuses on the victim. In the last hearing, the plaintiff attorney requested to add an additional witness to extend the trial. I think they are deliberately delaying the final verdict.”

“There are cases, charged under Section 375 of Penal Code for accused of minor rape and the alleged perpetrators were released on bail, given their age or health condition,” she said. “But not for this particular case. So, who will hold accountable, if the accused in this case does not survive all the trials and found to be not guilty in the end?”

The BBC and LGBT+ rights: The good, the bad and the unforgivable