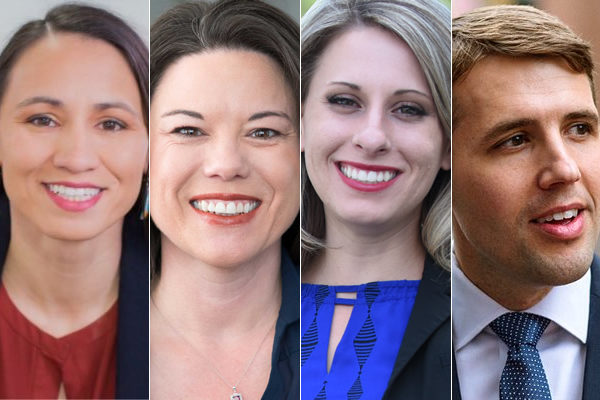 The LGBT caucus in the upcoming Congress will get a sizable boost in the aftermath of victories of gay congressional candidates on Election Day.Three gay and lesbian non-incumbent candidates — Angie Craig in Minnesota, Chris Pappas in New Hampshire and Sharice Davids in Kansas — were confirmed the winners Tuesday night in the bid for seats in the U.S. House amid “blue” victories that propelled Democrats to take control of the chamber.

Another candidate who’s bisexual, Katie Hill in California, appeared to have beaten incumbent Rep. Steve Knight (R-Calif.) in her bid to represent her state’s 25th congressional district in the House, but those results were close and weren’t declared as of Wednesday morning.

Two other LGB incumbents — Reps. Jared Polis (D-Colo.) and Kyrsten Sinema (D-Ariz.) — will be leaving the House for higher ambitions. Polis was elected governor of Colorado and Sinema was in a yet-to-be called race to represent Arizona in the U.S. House.

All in all, with at least three freshman LGB representatives coming into the House and two leaving, the LGB representation of the House will have a net gain of at least 1 in the 116th Congress, or 2 if Hill is successful in her bid.

That will make about 1.6 percent of Congress to be openly LGB, which is short of the 3.5 percent of the U.S. population that identifies such, but still closer to the country’s demographics.

Cicilline, who’s co-chair of the Equality PAC, said in a statement the victories of the gay congressional candidates represent “a historic night in the fight for equality.”

“We will enter the 116th Congress with an unprecedented number of LGBTQ members,” We congratulate Chris Pappas, Sharice Davids, and Angie Craig on their victories last night. Their presence in the House will ensure the LGBTQ community is well represented in Congress.”

Meanwhile, in U.S. Senate races, Sinema was behind in her race in Arizona against Republican candidate Martha McSally as of Wednesday, although about 1 million early ballots weren’t yet counted. If Sinema is ultimately elected and joins lesbian Sen. Tammy Baldwin (D-Wis.), it would double LGB representation in the chamber.