A five-judge panel on the Caribbean Court of Justice on Tuesday unanimously struck down a Guyana law that criminalizes cross-dressing.Authorities in the South American country in 2009 arrested four transgender women and charged them with violating a colonial-era law that took effect in 1893 when Guyana was a British colony.

A press release that three Guyanese advocacy groups — Guyana Trans United, UWI Rights Advocacy Project and the Society Against Sexual Orientation Discrimination — issued on Tuesday says the four trans women were held at a police station for three days “after their arrest for the minor crime.”

The groups note a judge told the four trans women “they were confused about their sexuality, that they were men and not women and urged them to go to church.” The four trans women ultimately pleaded guilty to the charges and they each paid a fine of $7,500 Guyana dollars ($35.97).

The four trans women and the Society Against Sexual Orientation Discrimination in 2010 filed a lawsuit that challenged the law’s constitutionality and the statements the judge made against them.

The Guyana High Court and the country’s Court of Appeal both ruled against the four trans women and the Society Against Sexual Orientation Discrimination. They brought their case to the Caribbean Court of Justice, a Trinidad and Tobago-based court that has authority over Guyana.

“The whole trans community in Guyana is very happy today,” said Gulliver McEwan, co-founder of Guyana Trans United who is one of the plaintiffs in the case, after Tuesday’s ruling. “I have always said that we should know what the law expects of us before we act and I am pleased that the court agreed that this law is vague.” 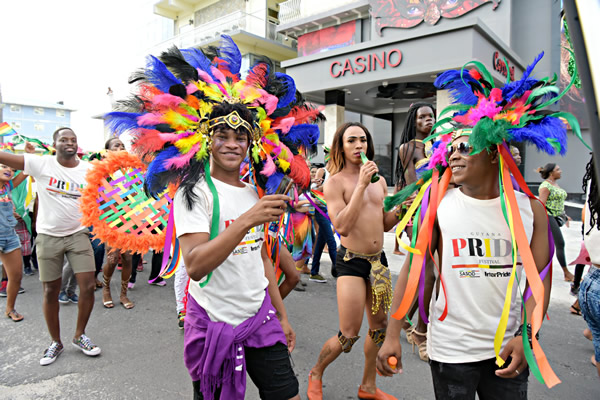 Guyana’s first Pride parade took place earlier this year. A five-judge panel on the Caribbean Court of Justice on Nov. 13, 2018, ruled the country’s colonial-era law that criminalizes cross-dressing is unconstitutional. (Photo by Paul Persaud of the Society Against Sexual Orientation Discrimination)

Society Against Sexual Orientation Discrimination Managing Director Joel Simpson welcomed the ruling as “a clarion call to engage state actors on how the law engenders social and economic exclusion of disadvantaged groups.”

“Trans persons remain vulnerable to arrests for small crimes like loitering in Guyana’s colonial-era vagrancy laws which are still on the statute books,” he said.

Simpson in his statement also said the ruling, which says his organization has legal standing to bring legal challenges on behalf of LGBTI Guyanese “will allow civil society groups to take legal action when rights of its members are violated.”

“This is a victory for human rights and justice in the Caribbean,” he said.

Guyana is a predominantly English-speaking country that borders Venezuela, Brazil and Suriname.

The Society Against Sexual Orientation Discrimination in June organized Guyana’s first-ever Pride parade that took place in Georgetown, the country’s capital. Activists in the country and across the region in April celebrated a ruling that struck down Trinidad and Tobago’s sodomy law that had been in effect since the country was a British colony.

The India Supreme Court in September issued a landmark ruling that decriminalized consensual same-sex sexual relations in the country.

“We just urge all of our friends and partners in other countries around the world to move on as we have done to make their societies more open, more liberal, to embrace anti-discrimination in relation to the LGBT community as we have,” said Darroch. “It just makes your society a better place.”