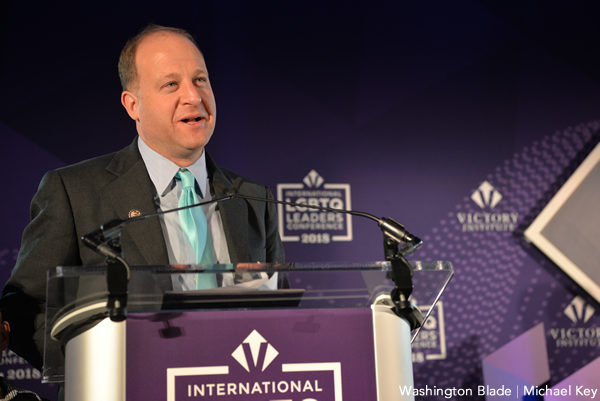 Today, he remains focused on the work ahead — and decidedly modest about his LGBT milestone.

In an interview with the Washington Blade at the 2018 International LGBTQ Leaders Conference just prior to his flight back to Colorado, the governor-elect said the distinction he earned doesn’t make a difference in his job or approach to governing.

“It doesn’t make a difference in the job in that I have to now hire or recruit our 19 Cabinet members,” Polis said. “I’m in the process of interviewing great people to help run the state of Colorado and make it even better. We’re getting ready to deliver on our plans to save people money and extend kindergarten to full day and move toward more renewable energy.”

The national media, Polis said, are more interested in covering his achievement for the LGBT community than the local media in Colorado, which he said he was similar to when he was elected to the U.S. House in 2008 and was the first non-incumbent gay male elected to Congress.

Even though he said he’ll be a governor “for all Coloradans,” Polis said legislation that would advance LGBT rights is on his agenda once he becomes governor and a new legislature — this time with Democrats in control of both chambers — is seated.

“We, of course, have strong laws that prevent discrimination on the basis of sexual orientation or gender identity in Colorado, we certainly want to make the step to make sure we’re inclusive for everybody regardless of their race, or gender, or orientation and where they come from,” Polis said.

Those advancements, Polis said, are “particularly important in the age of Trump with some of the divisive language that’s used against our community and other communities by the president.”

Two initiatives Polis identified were legislation that would ban widely discredited “ex-gay” conversion therapy for youth in Colorado and legislation that would ease the process by which transgender people can change the gender marker on their birth certificates. Other states have made progress on those initiatives and enacted them into law, often on a bipartisan basis.

Polis said Colorado has already made progress on the birth certificate issue, but “yes we want to of course make that easier” and a new law would ensure “parents can’t force their children into unscientific, torturous conversion therapy.”

“We have to get them through the legislature,” Polis said. “So again, our legislature starts in early January and they finish in May. All of these measures have strong support from members of the legislature. Hopefully, they’ll reach my desk soon.”

One key piece of unfinished business at the federal level for Polis was the Equality Act, legislation that would amend the Civil Rights Act of 1964 to bar discrimination explicitly at the federal level on the basis of sexual orientation and gender identity. Things have changed now that Democrats are poised to take control of the House and House Minority Leader Nancy Pelosi (D-Calif.) calling it a personal priority.

“I think the Equality Act will have more support than ever before,” Polis said. I was honored to have been there at the inception of the Equality Act, working with [Rep.] David Cicilline to incorporate much of our worker protection act, including other forms of protection. It’s bipartisan. It is bicameral. Hopefully, it’ll be among some of the first bills that Speaker Pelosi brings to the floor of the House of Representatives.”

But the House is just one chamber of Congress. The legislation would face an uphill climb in the Senate, which now has an expanded Republican majority, and likely hostility from President Trump (even though Trump said in 2000 he likes the idea of adding sexual orientation to the Civil Rights Act.)

“I would encourage Senate Majority Leader Mitch McConnell to allow an open vote on the Equality Act after it passes the House so that it can advance to the desk of the president,” Polis said.

Reflecting on his time in Congress, Polis identified his role in the Every Student Succeeds Act, legislation that updated the No Child Left Behind Act, as a key achievement as well as his work more generally on the Education & the Workforce Committee. In terms of LGBT rights, Polis pointed to expansion of the LGBT Equality Caucus, the role of the Equality PAC in electing leaders and his introduction of the Student Non-Discrimination Act.

“It would be nice to have the legal fight for equality in the rear view mirror, but we’re not there yet,” Polis said.

“I was there at the inception of the Equality Act,” Polis added. “I authorized and introduced the Student Non-Discrimination Act, which will also be unfinished work that I believe Congress will accomplish. It’s a matter of when, not if.”