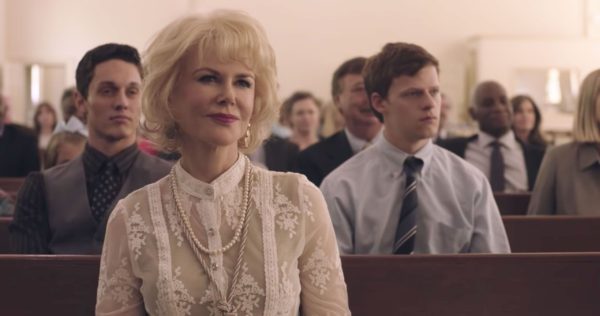 When Jared (LUCAS HEDGES) is outed as gay to his parents by a desperate new college friend, he is just as shocked as they are.  Whilst he is aware of having feelings for other boys Jared is genuinely unsure of his sexuality and this is the reason he calmly acquiesces to his parents demand that he leave college to attend Love In Action that specialises in gay conversion therapy.

His father (RUSSELL CROWE) is the part time Pastor of a large church and also the owner of a successful car dealership in Arkansas and has reached his decision that this is the right course of action after consulting with two rather conservative Church elders.   His mother (NICOLE KIDMAN)  quietly goes along with this, and she is the one who accompanies Jared to the Center, and moves into a nearby hotel, where she and Jared will live whilst he goes to his daily ‘lessons’.

The story is based on GARRARD CONEY’S  2016 memoir so we assume that the methods that the school undertook to indoctrinate the ‘pupils’ was reasonably accurate. Adapted by JOEL EDGERTON who also directed and starred as the School’s Principal, he trod a careful path not to make the movie become one big anti-conversion rant.

Jared tries hard to come to terms with what his own sexuality may be and reconciling that with his faith,  in an environment that comes over literally like a prison . It is as he and the other ‘pupils’ are verbally bullied by the school establishment, that the quiet introspective Jared finally finds his voice to speak out.  It is however when he awakens his mother as to what is actually going on every day when he is dropped off at ‘school’,   that she finally takes his side and calls the principal out for being the charlatan that he is.

Boy Erased comes on the heels of The Miseducation of Cameron Post the award winning movie that ridiculed gay conversion therapy. which really appealed to teenagers.  With 39 US States still legally allowing such centers to operate this compelling new movie seems to be aimed more at parents who are not aware of the inequities of the system and long-term harm they can cause young people.

Hedges puts in a finally nuanced performance as Jared which is already attracting the attention in this awards season.  However it is Kidman’s turn as the protective mother that really grabs your attention whilst you are reaching for the tissues.

Boy Erased somehow lacks the power of Cameron Post and doesnt have you reeling quite so much, but in this current political climate any attempt to spread the news and truth  about these places is sorely welcomed.