Film Review: “Can You Ever Forgive Me?” 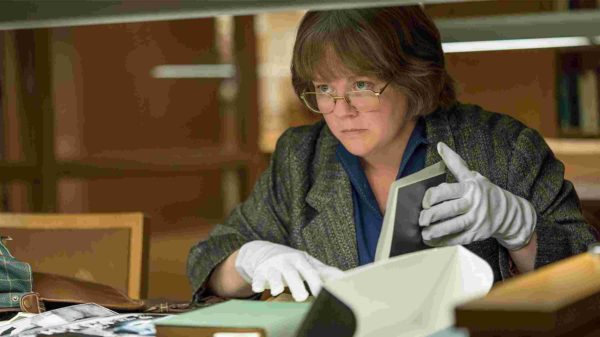 When the movie opens Lee (MELISSA MCCARTHY) is seen as a bitter and mean spirited alcoholic who has just been fired from her latest job and is in her squalid unkempt Manhattan apartment with just her cat for company.  Totally broke and not having paid her rent for months , she has  exhausted anyone who has tried to help her in the past and her only solace now is drinking alone in a bar spending her last few dollars.

It’s there she meets Jack (RICHARD E GRANT) a flamboyant gay man also destitute and seemingly homeless too, but who proves to be a worthy companion to wallow with.

Life had been better for Lee in the past and she had published three successful biographies but now she has writers block trying to finish her 4th, a memoir on Fanny Brice the vaudeville star.  She insists on pursuing it even though her Agent tells her that it is unsaleable.  It is however whilst she is in the Library doing research on Brice that she has a lucky break. There secreted between the pages of a book are two letters written by Brice, which Lee quickly slips into her bag.

When she sells the first letter to a book store which specialises in collectable memorabilia , Lee is pleasantly surprised by how much money it fetches, and even more pleased when she embellishes the second letter with some of her own wit, and this sells for even more.

Once she realises that she has inadvertently stumbled on a potential lucrative income, she carefully starts forging letters from the likes of Noel Coward and Dorothy Parker.  As she sells them on to a whole network of dealers, Lee is not only suddenly making enough money to pay off her debts and live, but she is also finally finding an outlet for her writing (albeit in other people’s names)

With Jack roped in to help her sell some of the letters, life suddenly seems better for this odd couple of drunks, until alarm bells sound when they flood the market with just too many letters.

The movie is based on Lee Israel’s own life story and her memoir which ironically turned out to be her best selling book.  The script written by  NICOLE HOLOFCENER and JEFF WHITTY has a great deal of sympathy for Lee which perfect suits McCarthy who gives a career best performance as the sullen unhappy writer.  Her interpretation on this woman seemingly incapable of any meaningful social intercourse or relationship is absolutely pitch perfect, and she is a sheer joy to watch.

So too is Grant as the hapless gay man who would love to grab any opportunity of a relationship, but failing that is happy to have alcohol as an alternative.

Can You Ever Forgive Me has the unusual distinction of having both of its two main characters as gay yet it escapes all the usual norms that one associates with an LGBT movie. Their sexuality is treated as unimportant to the main strands of the plot but undeniable is the fact that this is very definitely a queer story.  And an excellent one at that.