William Barr, President Trump’s pick to become the next attorney general, held his cards close to the vest on LGBT issues Tuesday during his confirmation hearing, but hinted upon confirmation he’d pursue the anti-LGBT policies of his predecessor Jeff Sessions.

The answers from Barr suggest he’d continue to uphold the Justice Department’s view that LGBT people aren’t protected under Title VII of the Civil Rights of 1964, which bars sex discrimination in the workforce. Additionally, Barr suggested he’d uphold religious freedom even at the expense of anti-LGBT discrimination.

In his opening statement before the Senate Judiciary Committee, Barr recognized the increasing number of hate crimes in the United States, including LGBT people, and pledged to address them under the Matthew Shepard & James Byrd Hate Crimes Prevention Act of 2009.

“We can only survive and thrive as a nation if we are mutually tolerant of each other’s differences, whether they be differences based on race, ethnicity, religion, sexual orientation or political thinking,” Barr said. “And yet, we see some people violently attacking others simply because of their differences. We must have zero tolerance for such crimes, and I will make this a priority as attorney general if confirmed.”

But under questioning on LGBT issues from Sens. Cory Booker (D-N.J.) and Mazie Hirono (D-Hawaii), Barr indicated enforcement of the hate crimes law would likely be the extent of his pro-LGBT advocacy at the Justice Department.

Booker initiated the questioning on LGBT issues by referencing a 1995 article Barr wrote for a conservative Catholic publication that laments growing acceptance of the LGBT movement compared to religious communities.

Asserting the 1995 article demonstrated a view being LGBT was immoral, Booker asked Barr whether he still holds those views, Barr replied “no,” but disputed the article conveyed anti-LGBT views.

After Booker insisted he was quoting the actual language, Barr said he’d inform the committee about his views. Barr reflected on the U.S. Supreme Court’s 2015 ruling for same-sex marriage.

“If I had been voting on it at the time — my view is that under the law, under the Constitution, as I originally conceived it before it was decided by the Supreme Court, marriage was to be regulated by the states, and if it was brought to me, I would have favored martial unions, single-sex,” Barr said.

When Booker interjected he was questioning Barr about his views in the 1995 article and whether the LGBT movement is immoral, Barr expressed a need for tolerance.

“In a pluralistic society like ours, there has be to a live-and-let-live attitude, and mutual tolerance, which has to be a two-way street,” Barr said. “My concern, and the rest of the article addresses this, is I am perfectly fine with the law as it is, for example, with gay marriage, perfectly fine, but I want accommodation for religion.”

Booker asked Barr whether he thinks laws “designed to protect LGBT individuals from discrimination contribute to what you describe as a breakdown for traditional morality.”

Barr replied “no,” but added, “I also believe there has to be accommodation to religious communities.”

Booker acknowledged, “You and I believe in freedom of religion,” but shifted the focus to anti-gay workplace discrimination. Barr replied, “I think’s that wrong.”

When Booker asked whether that means the Justice Department should protect LGBT kids from harassment and hate crimes and pursue efforts to protect the civil rights of LGBT Americans, Barr replied. “I support that.”

Referencing his opening statement, Barr said, “As I said in the beginning, I’m very concerned about the increase in hate crimes.”

But when Booker asked Barr if he sees a role for the Justice Department in banning anti-LGBT discrimination, the nominee had a different take. Barr replied, “If Congress passes such a law.”

Barr then referenced the petitions currently before the U.S. Supreme Court seeking clarification on whether Title VII of the Civil Rights Act, which bars discrimination on the basis of sex in the workplace, applies to cases of anti-LGBT discrimination.

“I think the litigation going on now on Title VII is what the the 1964 act actually contemplated, but personally, I think —,” Barr said.

Before Barr could finish and venture an opinion on Title VII, Booker interrupted and asked to verify whether lawmakers contemplated including LGBT people in Title VII. Barr rejected that idea, saying “no.”

“I think it was male-female that they were talking about when they said sex in the ’64 act,” Barr added.

Playing with one of the many U.S. Senate coasters before him on the witness stand, Barr insisted the onus is on Congress to make the law. 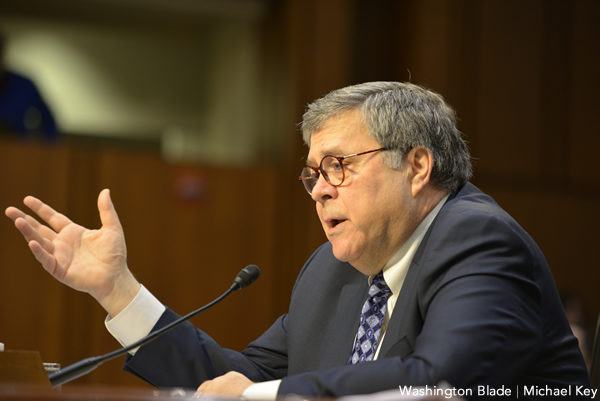 “I’m saying Congress passes the law, the Justice Department enforces the law,” Barr said. “I think the ’64 act on its face — and this is what is being litigated, what does it cover? I think for like three or four decades, the LGBT community has been trying to amend the law.”

When Booker asked if Barr would pursue the Obama administration practices, Barr replied, “I don’t know what you’re referring to.”

“I’m against discrimination against anyone because of some status, their gender or their sexual orientation or whatever,” Barr continued.

Hirono picked up where Booker left off, asking Barr directly about the Justice Department’s friend-of-the-court brief before the U.S. Second Circuit Court of Appeals arguing anti-gay discrimination isn’t covered under Title VII. As Hirono noted, both the Second Circuit and the Seventh Circuit have “rejected the department’s argument” about the law.

The Hawaii Democrat asked Barr if he’d appeal those decisions to the U.S. Supreme Court. In response, Barr seemingly referenced the petitions before justices, noting, “I think it is going up to the Supreme Court.”

“It’s pending litigation and I haven’t gotten in to review the department’s litigation position, but the matter will be decided by the Supreme Court,” Barr said.

Hirono responded: “That sounds like a ‘yes’ to me. The department will continue to push the argument that has been rejected.”

At this point, Barr tipped his hand on his view Title VII doesn’t cover anti-gay discrimination.

Asked by Hirono if discrimination is OK, Barr replied, “That’s not at all what I’m saying. I’m saying the question is the interpretation of the statute passed in 1964.”

“As I’ve already said, I personally, as a matter of my own personal feelings think there should be laws that prohibit discrimination against gay people,” Hirono said.

When Hirono asked Barr if he’d review the Justice Department’s position, Barr replied, “No. Because there’s a difference between law and policy.”

Hirono responded: “The DOJ doesn’t have to file an amicus brief either.”

The Hawaii Democrat wasn’t done on LGBT issues, asking Barr about an explosive report in the New York Times asserting the Department of Health & Human Services was preparing a rule to define transgender people out of existence under Title IX of the Education Amendment of 1972.

Asked by Hirono if he believes transgender people are protected from discrimination under Title IX, Barr dodged.

“I think that matter’s being litigated in the Supreme Court, too,” Barr said.

When Barr added he doesn’t know the Justice Department’s position on the issue, Hirono said she’d ask him to review the issue.

LGBT groups have raised concerns about Barr’s confirmation as attorney general, asserting he lacks a commitment to protecting civil rights. (One longtime gay friend of Barr’s, however, former Time Warner general counsel Paul Cappuccio, has defended the nominee, telling the Blade, “He’s not going to ever let people be discriminated against, OK?”)

Jon Davidson, chief counsel of Freedom for All Americans, said Barr’s testimony “did little to assuage those concerns” of LGBT rights groups.

“While he testified he is “fine” with “gay marriage,” his comments that there “has to be accommodation to religion” — something not required or even permitted for other people’s marriages — is very disturbing,” Davidson said.

“In addition, although he said he thinks firing someone based on their sexual orientation is ‘wrong,’ he refused to disagree with the anti-LGBTQ positions the Justice Department has been taking when it comes to Title VII and he erroneously asserted that Title VII should be limited to what Congress believed it was accomplishing in passing the Civil Rights Act of 1964,” Davidson said. “That position has already been rejected several times by the Supreme Court, which has said that what Congress had in mind at the time is not controlling.

Ultimately, Davidson had a dismal forecast for Barr’s stewardship of the Justice Department.

“It appears that he intends to carry forward the positions of former Attorney General Jeff Sessions, which have consistently opposed equal rights for LGBTQ people,” Davidson said.

“I think he said absolutely nothing to alleviate any of the concerns that we have based on his record, and if anything, his comments only demonstrate that he is exactly what his record suggests that he is, which is someone who will not be a champion for civil rights generally or LGBT equality specifically,” McGowan said.

Barr’s confirmation hearing took place as the Justice Department is defending President Trump’s transgender military ban in court and has called on the U.S. Supreme Court to intervene. Barr didn’t address the policy, nor did any member of the Senate Judiciary Committee inquire about Barr’s view on the issue.

Face to Face Hosts ‘Beerfest – The Good One’ Benefit June 11

The NFL should withdraw the Super Bowl LVII from Arizona