After Russia voted to extend its LGBTQ+ propaganda law to adults, artist and activist Yulia Tsvetkova has been forced to flee.

Tsvetkova was acquitted of distributing pornography and so-called LGBTQ+ “propaganda” by the Komsomolsk-on-Amur court in July, in a rare win for the queer community in Russia.

Tsvetkova was arrested and charged with distributing pornography in 2019 after she posted drawings of vaginas on social media in a bid to combat societal body norms. She was also charged over the same drawings in 2020 after Russian officials claimed she violated the country’s LGBTQ+ “propaganda” law.

After the acquittal, prosecutors attempted to relaunch proceedings against Tsvetkova, but on 22 November a court decided to uphold the decision.

She added it was “obvious” the family had left Russia in the wake of political leaders updating and extending an anti-LGBTQ+ law, Radio Free Europe/Radio Liberty reported.

“Why they left, I think it’s obvious,” Khodyreva said. “Yulia is [regarded as] a ‘foreign agent’, with a new law [criminalising “LGBT propaganda”] – it’s easier to die than to live in Russia.”

In June, Tsvetkova was declared a “foreign agent” by the Kremlin – joining a constantly growing list of activists, journalists, LGBTQ+ advocates and non-governmental organisations deemed hostile by the Russian state.

Russian lawmakers unanimously approved a bill banning all forms of so-called LGBTQ “propaganda” in a final reading on Thursday (24 November). The bill now needs the approval of the upper house of the Duma and anti-LGBTQ+ president Vladimir Putin before officially becoming law.

The legislation expands on a 2013 law banning the dissemination of information about LGBTQ+ people in the media, literature, advertising, online and other forms of media aimed at minors. The new law will forbid the “promotion of non-traditional sexual relations” for all ages. 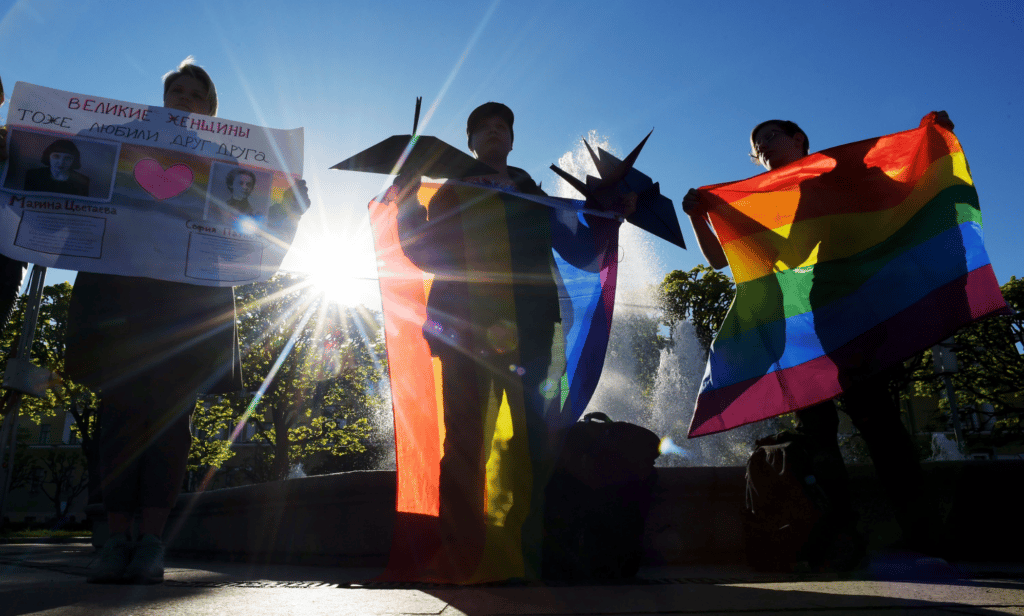 The Russian state has increasingly targeted queer activists and allies amid a crackdown on so-called ‘LGBTQ+ propaganda’. (Getty)

Khodyreva wrote in a post on social media Sunday (27 November) that Tsvetkova took the opportunity to flee the country.

She detailed how the artist’s first attempted “departure” in July “ended with the arrest of 10 people” and other bids to escape “stopped before starting”.

Khodyreva added a “new criminal case” against Yulia Tsvetkova had begun, making it impossible for the artist to remain in Russia. She confirmed Tsvetkova was not in France, where she, her mother, had been visiting for a time.

Amnesty International’s Russia director Natalia Zviagina said the decision to uphold the acquittal of Yulia Tsvetkova is a “rare example of justice in today’s Russia”.

“The repressive architecture built by Vladimir Putin’s administration over the last two decades aims to stage absurd trials based on spurious accusations – it’s rare that anyone escapes the clutches of this system,” Zviagina said.

Zviagina described how Tsvetkova faced “house arrest, travel restrictions, fines and reprisals simply for exercising her right to freedom of expression” over the past three years.

‹ Same-sex households in the U.S. surpass 1 million for the first time, data shows › Happening this Month Sebastopol Senior Center for the LGBTQI Community