On Saturday, a report began spreading online that a transgender woman was shot and killed after she followed another woman into a Colorado department store bathroom.

“The transgender woman began raising her voice and using explicit language towards [the other woman] while continuing to follow her into the restroom,” the story said. It reported that Karen Workman allegedly fired three shots from a firearm she had in her bag, killing Donna Wright.

The story, first published on a website called Associated Media Coverage (“News You Can Trust”), contained one section of bolded text, which it claimed was the language on a sign outside the bathroom at the department store:

“At Bradford’s we encourage all guests to use the restroom in which they identify with. Thank you, Sincerely, The Bradford’s Management Team.”

There is no department store in Colorado named Bradford’s. Karen Workman and Donna Wright are not real people, and Associated Media Coverage’s website is filled with fake news stories. 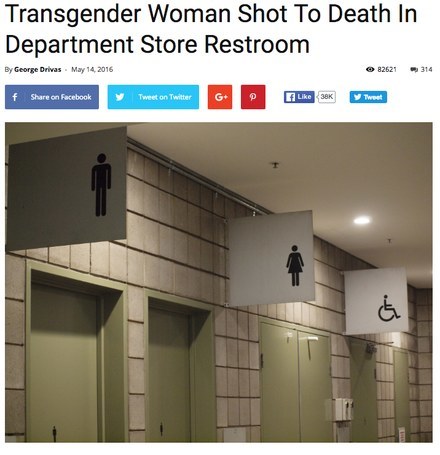 The false report has generated more than 35,000 shares, likes and comments on Facebook. It was picked up by at least two real conservative-leaning sites, the DC Gazette, and the Tea Party News.

It’s one of several trans-themed hoaxes that have spread widely on Facebook in recent weeks. BuzzFeed News looked at the most shared articles from over 40 fake news websites and found other recent viral hits, including the fake story of a trans woman getting caught taking pictures of underage girls at a Target, a satirical article headlined “Transgender Dog Unsure Which Tree To Pee On,” and one that reported “Ann Coulter Arrested For Using Women’s Bathroom.” A false claim that Caitlyn Jenner is going to de-transition has also been circulating for weeks.

The spike in anti-trans hoaxes began after North Carolina passed a law, House Bill 2, that repealed LGBT nondiscrimination ordinances and that banned transgender people from restrooms in government-run buildings. It resulted in national coverage that caught the attention of the burgeoning fake news industry.

Fake news sites look like real news websites and write articles in a news format, but only publish fake stories. Examples include NationalReport.net, Huzlers, Empire News, and World News Daily Report, among many others. 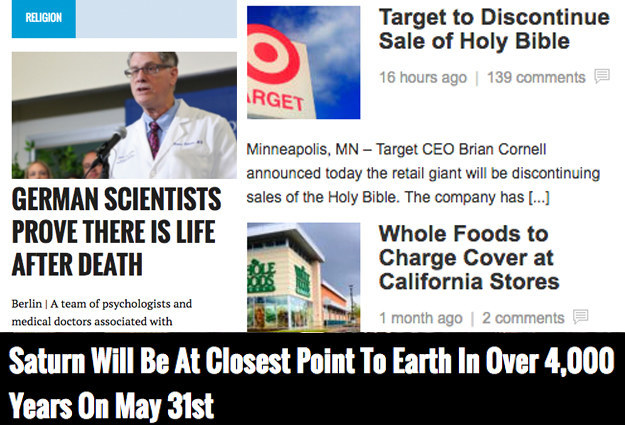 A recent BuzzFeed News report found that they continue to drive significant engagement on Facebook, in spite of an effort by Facebook to rein them in.

The North Carolina bathroom bill, HB2, is an appealing topic for fake news sites because it splits people along ideological lines. Research shows we are more likely to believe (and share) information that aligns with our existing beliefs and worldview.

“As you have likely noticed, the bathroom issue has really hit a nerve with evangelicals and Conservatives making it a ripe topic for ridicule,” said Allen Montgomery, the pseudonym used by a man who who runs NationalReport.net and other fake news sites. “These topics that highlight their (perceived) persecution complex are good business for those in the hoax and/or satire industry.”

He said he’s only published three or four stories pegged on the bathroom issue, but that others are going after what he calls the “easy money” of HB2 hoaxes.

The result is that fake news sites are churning out new trans-themed stories on an almost-daily basis to capitalize on the political polarization and anti-LGBT stance at the heart of HB2.

Urban legends debunking site Snopes has been busy disproving the various false rumors. Up until recently, the “transgender” tag on the site had only five stories associated with it, dating from last summer to to March of this year. Since April the site has posted11 new stories related to transgender people.

Kim LaCapria, the content manager for Snopes, said the site often sees a rise in rumours and hoaxes “in the immediate wake of civil rights wins by LGBT people in general.” In this case, North Carolina’s anti-LGBT law came as a response to an ordinance passed in Charlotte that banned discrimination against LGBT people.

The common theme with these fake stories is “they validate the opinions held by folks that are just bothered by LGBT folks,” according to LaCapria.

Mara Keisling, executive director of the National Center for Transgender Equality, said she’s noticed a spike in anti-trans rumours and hoaxes since the law was passed.

This person shared the bathroom shooting hoax and encouraged women to get their concealed weapons license, saying “make sure you wait until the perv quits breathing before calling 911.” Facebook / Via Facebook: 10153747083606478

“Trans people all over the U.S. are really really on edge right now, and every time one of [these hoaxes] comes out lots of trans people hear them and react to them,” she said.

Keisling is concerned that hoaxes about trans people harassing other people in bathrooms will “encourage vigilantes to come out of the woodwork and hunt trans people.”