Diaman is an experienced gay writer with seven novels and three memoirs under his belt.  This newest novel is a quiet, charming story of long loving relationships in San Francisco and Europe (Germany, then mostly in Paris) and finally, briefly, in San Miguel de Allende, Mexico.  There are three chapters, the first named for Theo, the son of Greek emigrants from Istanbul, who opened a Greek bakery, which became a landmark in the Bay Area.  Theo works in a book store and becomes a manager.  He falls in love with Sebastian, an American son of Ethiopian parents.  Sebastian is a musician who finds it impossible to break into the crowded San Francisco music market.  He gets a chance to perform in Europe, so he takes it, first in Germany, going from city to city, then finally to Paris where he makes his mark.  In Germany he meets the Turk, Deniz.  They begin living together and eventually become lovers. Sebastian teaches Deniz to play the guitar, and he joins Sebastian in his singing career.  They are very successful.

In the meantime, Theo accepts his separation from Sebastian and meets Conrad, a Native American silversmith from New Mexico.  They too become a loving couple.  Much later, Conrad has an urge to discover his roots and rides off on his motorcycle to the Southwest, then down into Mexico.  He finally settles in San Miguel de Allende.  He builds a house there and eventually persuades Theo to join him.

This engaging novel is divided into 150 short chapters, none longer than 2 pages.  Each is a snapshot into the lives of Theo, Sebastian, Conrad, their families and friends, recording the exciting and the mundane aspects of their lives, but never boring, always a pleasure to read.  Diaman is a skilled and talented writer.  Collections of current gay fiction will want this for their collections, and readers seeking an uplifting gay relationship novel will want to enjoy this too. 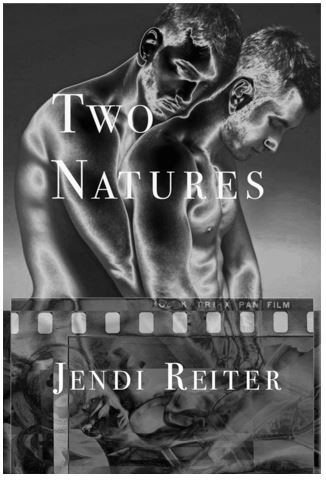 Two Natures is a literary quality gay novel by an award-winning author of poetry books and short stories.  Although this is Reiter’s first novel, it received a first prize in ‘best gay contemporary fiction’ from Rainbow Awards.  ‘Bildungsroman’, a charming German word for a coming-of-age novel, is an apt word to describe this story as it tells the story of Julian Selkirk, a native Atlantan on scholarship studying fashion photography at the Fashion Institute of Technology in Manhattan.

The novel takes place in New York City in the 1990s, ten years after the AIDS disaster struck. Gay young men are getting tired of the restrictions and are not always careful.  Julian falls in love with Paul, a working class man from Pittsburgh who works as a physical trainer. They develop an open relationship as Paul gets into drugs, porn and contracts AIDS. A political activist named Peter helps Julien cope. Together, they care for Paul, who then dies. His straight-laced family offer no recognition of Julien’s role in his life. Julien, Peter and friends drive to Pittsburgh for the funeral, a decision that causes a scandal.

Admittedly, fashion freaks will love this novel more than I did.  Outside of fashion, the realistic gay drama was more than enough to maintain my intense interest.  Quality writing abounds. “The film of another day developed in shades of gray, roofs and windows emerging from the bath of darkness, touched with the pallor of dawn.”  Characters are finely drawn and dialogue is genuine.

This is a truly fine novel that belongs in collections of current gay fiction and will be enjoyed by all lovers of quality writing on gay themes.