40 year-old Dean is trying not to have a mid-life crisis, but his chances of succeeding are slim.  He’s a very successful graphic designer in Silverlake California who is starting to loath his good paying clients because of their poor taste levels.  Now because the lazy eye he’s had from birth is playing up, his eye doctor has just prescribed tri-focal glasses which he is having great difficulty adjusting too.  Then his rather solitary and seemingly empty life is suddenly disturbed by an email that arrives totally out of the blue.  It’s from Alex an ex-boyfriend who broke his heart when he walked out of his life 15 years ago, and then totally disappeared off the grid never to be heard of again. 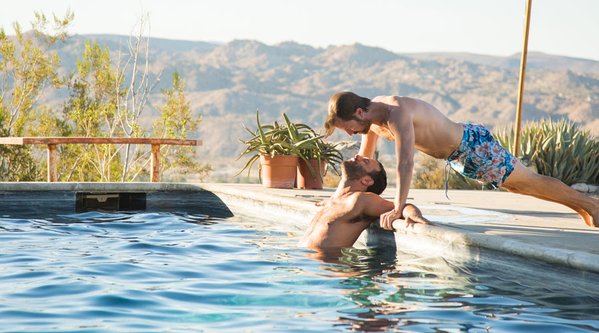 Dean’s initial reaction is one of anger, but he is so intrigued as to why Alex should now decide to get back in touch after all this time, that he responds quite politely.  After a couple of emails flying back and forth, Dean swallows the bait and invites Alex to join him for weekend as his desert hideaway near Joshua Tree.  They never make it inside the front door before clothes are being ripped off starting a very long and passionate bout of lovemaking as if they had never been apart.

Despite some deep and bitter regrets over their break-up all those years ago, they are both obviously able and keen to consider taking up where they left off.  If only it was that simple, and first they both have to discover the baggage and commitments that they have each accumulated over the past 15 years to see if that would be even be possible.  If they can deal with each others secrets and truths, they may have a chance or burying the past and starting anew, but is this too much to ask?

This riveting new drama is written and directed by Tim Kirkman who proved in his earlier work such as the delightful Loggerheads that he has quite a remarkable skill at making heart tugging stories, and this one is no exception. What is exceeding clever here is that once the totally charming (and very hot) pair meet up again, we have have no clue whatsoever how their story will pan out.  The idea of wanting to know how our lives would change if the major love of our life came back for a second round is such an intriguing one that so many of us can relate too and this makes us even more invested in the outcome of Dean and Alex’s own story.

In what is essentially a  two-handed drama, Kirkman cast well with Lucas Near-Verbrugghe as Dean who even though he has the biggest secret to share, comes over as the more honest of the two, and Alex played by Aaron Costa Ganis always seems that there is much more to his story about the past 15 year that he will never let on. Both men give sterling and utterly convincing performances that ensure we are engage right until the final credits role.

This rather wonderful compelling drama is a must-see for any and every hopeless romantic who will always wonder what would have happened if things had worked out differently.