“Freedom to Marry” director Eddie Rosenstein’s inspirational documentary will be shown Saturday, June 25 at 1:15 p.m. at the Castro Theater. The film  traces the marriage equality movement’s historic progress.  With probing profiles of Evan Wolfson, the founder of Freedom to Marry, Mary Bonauto, Civil Rights Attorney for GLAD, and many others who fought for all Americans right to marry who they love.  The steady march towards the landmark Obergefell v. Hodges decision is no less thrilling because we know the outcome.  “Freedom to Marry” may very well become not only a testament to the will of a group of people for their equal rights but as a manual for other groups anywhere who may need to do the same.

Congratulations Eddie on making such a beautiful, emotional, and enlightening film. Is “The Freedom to Marry” your first LGBT-themed film and if it is, what took you so long?

Thank you! It is my first LGBT themed film. Like most of my films, THE FREEDOM TO  MARRY is simply about people I find heroic. In this case, the heroes just happen to be gay and lesbian.

Evan Wolfson is such a fascinating man and I think you really captured who he is and what motivates him.  How much time did you spend with Evan, both at home, with his team, and in DC and how much of that footage made it into the film?

I’ve actually known Evan since I was little. We both grew up in Pittsburgh, our parents are friends and Evan has been a huge source of pride in our neighborhood for as long as I can remember. As adults, he and I both settled in New York City – I became a filmmaker, and he became as an activist. When it became apparent that ‘this was the year’ that the marriage movement crosses the finish line, I called and asked who was making ‘the film’. Since then, of course, we’ve spent a lot of time together, and it’s been great to reconnect.

Most of the scenes that I shot are, in fact, in the film. I think there’s probably only about a few scenes that I filmed with Evan that aren’t in the final film in some fashion. I try to be pretty economical as a filmmaker, and only shoot when I have a strong sense that what I’m shooting is part of the story. Of course, there is some ‘trial and error’ and exploration. But, it’s too hard on the budget and on the subjects to shoot without a sense of an overall plan.

You did a brilliant job capturing the emotional aspect of those fighting for marriage nationwide.  You paint a wonderful portrait of Mary Bonauto.  How did you go about getting her to reveal so much about her emotions?

I’d like to say it’s because I earned her trust, but the fact is – Mary is just Mary. Everyone mentions how brilliant, passionate, and fierce she is. But what blew my mind is how compassionate, committed and giving she is, too. And, as you can see, she’s amazingly emotional. She can be a molten volcano when she’s angry; she’s unbelievably loving and protective; and she’s like a human lightning rod when it comes to feeling the pain of others. I’m in awe of Mary and I’m so glad that she let us film her, and share some of her journey.

Tell us all about this special Michigan family and what it was like filming them?

April and Jayne’s issue was whether or not they could get married, and therefore whether or not they could legally, jointly, parent their five adopted children in their home state. Those are pretty real stakes and, while all eight of the cases in Obergefell v. Hodges were important, April’s and Jayne’s story struck me, personally, the most viscerally.

These are two women who adopted sick and/or drug addicted infants. Can you imagine how big their hearts are? Meanwhile, the state of Michigan was claiming that they were unfit to marry, and that gay parents aren’t as ‘good’ as straight parents.

Straight people abandoned some of these children, and left them to die. April and Jayne nursed them all back to health. These are the kind of women it’s impossible not to root for, and that made them ideal plaintiffs and, of course, ideal characters for this film. 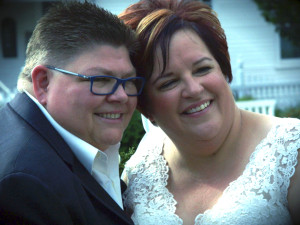 Is NOM president Brian Brown as creepy and ignorant in real life as he comes off on film?  What was it like being in a confined space with him?

Even though so many people on the marriage side despise Brian Brown, I wanted to at least give the people opposed to same sex marriage an opportunity to express themselves. So I approached Brian with respect and an open mind.

Plus, my goal has always been to make a film that doesn’t ‘shut out the other side’, but instead gently puts a human face on the situation, and thereby furthers real conversation. I never want to simply preach to the converted.

The only problem was, by the time I got to filming, most if not all of the arguments against same sex marriage had been debunked. Take, for example, the classic: “Children are better off with a mother and a father.”

Well, almost half the kids in this country are being raised by single moms, so that doesn’t work. Plus, same sex marriage has been around long enough, now, that there is data available. And all the studies show that, with regards to raising children, the sexual orientation of their parents doesn’t seem to factor in at all. Plus, of course marriage is not only about procreation. Older people get married. Infertile people get married. Lots of marriages do not result in children. We don’t require married couples to to have children, and we don’t force them to divorce if they don’t.

Another big argument is that, “This violates our religious beliefs.” Well, that may or may not be true, but marriage isn’t actually about religion. It is a civil institution. A marriage certificate is a legal contract, given out by the government, not by the church.

In other words, during the course of making this film, it became increasingly clear to me that there were no real reasons for Brian or anyone to legitimately oppose same sex marriage. I wasn’t creeped out by Brian – he’s a nice enough guy, in most respects. But I hope that someday he realizes that he has made a career out of inciting hatred and spreading discrimination. And, while he likes to try to pretend otherwise, this is not a theoretical debate. When people like put that much time and effort into spreading hatred and intolerance, real people experience real harm.

I cannot count the number of equality rallies and ACT-UP protests I’ve been to and always right next to us would be the religious fanatics with their giant bloody crucifixes, offensive signs, and ratty bibles.  They can be quite aggressive and threatening.  Is it just me or do they really ramp it up when the cameras are on?

I agree. They totally ramp it up when the cameras are on. They’re want the attention, and cameras are the megaphone they want.

“Freedom to Marry” has its ‘stars,’ but every single one of the ‘supporting cast’ is just as captivating.  How difficult was it to select which individual person and their story you would include in the film?

It was incredibly difficult, because so many people gave so much. And I feel terrible about all the people who I was not able to include.

And it’s not only the famous attorneys, civil rights leaders and plaintiffs who deserve a shout out. I think a lot about the millions of LGBT people who shared their stories at the dinner table, or at work, or knocked on doors at the homes of strangers in order make their voices heard. Many of these folks really put their own family, community, job, happiness and safety at risk. In the end, that’s what’s amazing about this story, and that’s why we finally have the freedom to marry in America.

“Freedom to Marry” should be used by any group struggling to achieve equal rights and you expertly show us how marriage equality was achieved.  Did you work closely with your subjects and/or other experts to create the structure of your film or was it something that came about organically?

I always hoped, in addition to a being a character driven story, and an important part of the historical record, that this film could offer some sort of a roadmap about how to effect social chance. That was one of the reasons I made this film, to begin with, and figuring out how to juggle those elements was one of the most interesting creative challenges, from the start.

It can be tough to keep an audience engaged when they basically know how your film will conclude, but you do so seemingly effortlessly.  How much did this concern you during the process of making your doc?

Funny, some people tried to convince me not to make this film about trying to win this case, for exactly the reason you mention – because, by the time we finished the film, audiences would already know what happened, so maybe just tell the historical story. But, I thought this could be more powerful if it wasn’t just a history film. I thought that, if we could bring audiences close to the main characters and figure out how to make an epic story really intimate, that audiences would get lost in the moment, and come along for the ride. Plus, not everyone knows the story. Plus, a back stage pass to one of the most important civil rights movement of our time is going to feel even more precious, as time goes on.

You are a better man than I for not mentioning and lambasting the organization that in my opinion co-opted marriage equality even though they refused to believe fighting its way through the courts was the way to go.  Did you feel that you needed to turn the focus back on the Mary, Evan, Freedom to Marry, and company and away from HRC?

A movement requires a lot of people, and everyone has a role. I obviously couldn’t include everyone, simply because it’s impossible to do that in a single film.

You really set the record straight.  Your film will stand as the record of the LGBT Community’s struggle for marriage equality.  Did you feel the magnitude of getting it just right, packing in all the pertinent information, and hitting those pivotal moments?

I totally felt the magnitude of that responsibility, and I still do!

I’m thrilled, Gary, that you like the film so much. But, of course, I’m bracing myself to hear from people who don’t.

Luckily, we can be sure that this movement will be studied in many of ways, for many years. We can be sure that there will books, theses and other films to help fill the gaps, and to tell the story from different perspectives. In fact, one of the projects on my own to-do list, is a ten part series that tells the whole story, chapter and verse. It’s an amazing American story, that’s for sure. I hope I can put that together.

‹ Frameline 40 Film Review: “Lazy Eye” › Call the Orlando Massacre a Hate Crime: This Was an Attack on the LGBT Community—and that Matters