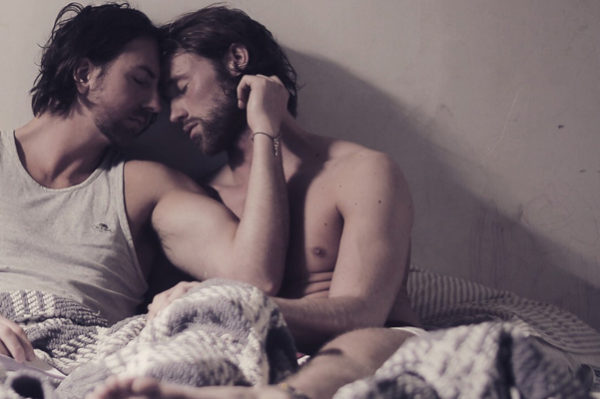 Peccadillo Pictures a leading distributor of LGBT movies in the UK  have just issued no 17 in their excellent series of Boys on Film collections of short movies.  It is something that they really excel at, and in queerguru’s eyes these are by far the best anthologies of queer shorts that we have seen for years.

Under the banner Love Is A Drug, Peccadillo have curated nine new short films from around the globe that are aimed at making us laugh, provoking our consciences, testing our tolerances, educating, entertaining and especially  making us want to fall in love.

From the nine compelling movies, which are all totally different, we chose our three favorites that are so worth watching more than just  once.

ALEX AND THE HANDYMAN

from the US and directed by Nicholas Colia is a cute story of a rather precocious nine-year-old boy who is used to be indulged by his mother (Hogan Gorman) who spends most of her day drinking and on the phone.  Alex (Keaton Nigel Cooke) develops a crush on twenty-four-year old Jared (Aaron Luis Profumo) an out-of-work performance artist who has been employed as a handyman to do work around the house.  He will stop at nothing to get Jared’s attention, and even plies him with tequila from his mother’s hoard just to get his own way.

HOLE is an award-winning film from Canada directed by  Martin Edralin, and is a provocative tale of Billy (Ken Harrower) a disabled man who yearns for intimacy in a world that believes he has no right to make such demands. This shocking and moving story so perfectly addresses a subject that probably in all honestly so many of us would prefer to ignore.

SPOILERS is a charming film from the UK directed by Brendon McDonall about an accidental encounter on a plane when Felix (Tom Mumford) and Leon (James Peake) both claim the same suitcase. It turns out that they have a lot in common and decide to spend an impromptu day together. Both men are carrying baggage from their past relationships and so fear that although they seem perfect for each other it may still all end up getting hurt again.

The other movies are :

LOVE IS THE DRUG  is available on DVD in the UK , and on streaming globally from https://www.peccapics.com