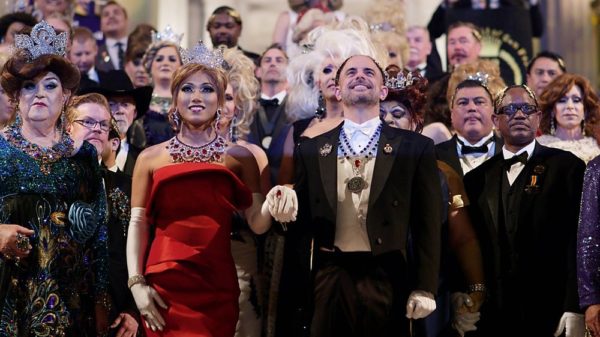 For his documentary feature debut filmmaker, Jethro Patalinghug has turned his cameras on one of the oldest LGBT organizations in the country, the Imperial Council also known as the Imperial Court System.  Patalinghug takes a look at its glorious history as it celebrates its 50 year anniversary and now starts to question if there is still place for it in today’s LGBTQ community.

The Imperial Court System was founded in San Francisco, California, in 1965 by José Sarria. In those dark days it was considered illegal for homosexuals to congregate in public together, but the owner of the Black Cat Cafe where Sarria worked as a drag queen, fought and won a landmark victory which changed all of that.

Sarris firmly believed that the community should not just come out of the shadows but be proud of what he called the nobility of being gay. Thus the Court system was created with a system of royal titles to recognize the roles that its members would play.  He always intended that the Court would join with other LGBT organizations and spearhead the move to equal rights.

Part social, part political but where the Court really took off was as a dynamic fundraising operation that would help fund crucial LGBT services and charities.  It naturally really came into its own during the AIDS Epidemic which devastated their hometown far more than most.  By mounting daily events it raised much-needed millions of dollars to help people stricken down with the disease to be able to pay for medications, rent and even funeral services.

The Council/Court excels in all its traditions especially the annual election and coronation of its Empress & Emperor who must use their year in office to not just further the cause but raise a substantial amount of money.  They all dress up in their elaborate regal drag with their huge coiffured wigs topped off with crowns and tiaras, and even the Emperors get to sport gold laurel leaf crowns.

Patalinghug mixes a wealth of archival footage with a whole string of interviews with some of the Courts past Empresses and Emperors and what comes over so loudly, is their sheer joy of being a part of this rather wonderful old organization.  It includes a clip from a 2004 interview with Saria himself, but the most moving part of the film by far is his funeral held in a Cathedral with the entire Court in their best black drag and dressed up to the nines in his honor.

The latter part if the film is given over to discussing how the LGBT community has not just evolved but also fully embraced this new age of technology giving us different perspectives on how we now congregate and interact with each other.  Patalinghug does attempt to draw any conclusions of his own, and members of the Court express their own very mixed opinions on the future.  It’s too early to see who will be proven right but however, after seeing  50 Fabulous Years it’s almost impossible not to want to wish them another 50 too.