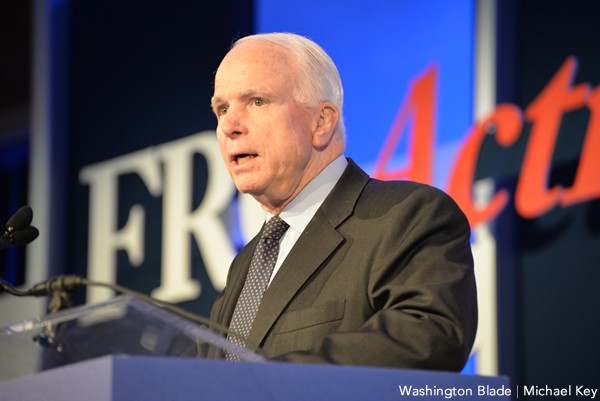 Sen. John McCain, who died Saturday at 81, leaves a legacy of patriotism, service to country — and being a thorn in the side of President Trump — but his legacy on LGBT issues is more complicated.Throughout his decades in Congress, the Arizona Republican took widely different stances on LGBT issues — at times mocking them as unimportant, at other times embracing equal rights for the LGBT community. McCain would often oppose LGBT rights to align with his party and for the sake of political expediency, although the general direction of the positions he took as time went on demonstrated increasing acceptance of LGBT people.

Masen Davis, CEO of Freedom for All Americans, said in a statement McCain’s growing acceptance of LGBT rights is consistent with many Americans.

“John McCain’s journey to a more supportive place on a number of LGBTQ issues is one that is familiar to so many Americans,” Davis said. “His evolution is reflective of the growing awareness that each and every one of us share the same values and the same aspirations, and we all strive toward building a more perfect nation.”

An early test for McCain on LGBT issues during his career in the Senate came in 1993, when lawmakers were debating gays in the military in response to then-President Clinton’s call to lift the administrative ban on their service. As a member of the Senate Armed Services Committee, McCain was part of the deliberation that ended with lawmakers passing the statutory ban on military service that came to be known as “Don’t Ask, Don’t Tell.”

Three years later in 1996, McCain continued his opposition to LGBT rights when he was one of 84 senators to vote in support of the Defense of Marriage Act, a federal prohibition on the recognition of same-sex marriage.

At around this time, former Rep. Jim Kolbe, McCain’s fellow congressman from Arizona who was closeted at the time, angered LGBT activists for his vote in favor of DOMA. LGBT activists, including the then-publishers of the Washington Blade, threatened to out Kolbe over his vote, but Kolbe pre-empted them by coming out as gay.

Despite the political risk of coming out at the time, McCain came to his friend’s aid and said Kolbe’s coming out hadn’t “caused much of a ripple” in Arizona.

“I think Jim Kolbe has the respect and appreciation of most Arizonans,” McCain said. “I believe if he ran for re-election, he wouldn’t have much difficulty.”

McCain’s prediction proved correct. Kolbe would be re-elected and go on to serve another six terms in Congress before retiring in 2007.

In an interview Sunday with the Arizona-based Kronkite News, Kolbe said having McCain’s support when coming out as gay was important.

“In fact, before I could even tell him, he put up his hand and said, ‘Jim, don’t worry about it, you’re my friend, you’re always going to be my friend, and it’s not going to make any difference,’ before I even got the words out of my mouth,” Kolbe said. “And so, he was intensely loyal to people that he liked, and he was certainly intensely loyal to me.”

Nearly a decade after the DOMA vote, McCain took a position aligned with the goals of the LGBT community in 2004 and 2006 when he broke with his party and opposed the Federal Marriage Amendment, a measure pushed by President George W. Bush that would have changed the U.S. Constitution to prevent the legalization of same-sex marriage.

At a time when support for LGBT rights wasn’t popular and most Americans opposed same-sex marriage, McCain’s position as one of the few Republicans to oppose the Federal Marriage Amendment was distinctive.

Although McCain acknowledged on the Senate floor opponents of the amendment contended it was “purposely divisive, discriminatory and intended to deny some Americans their right to the pursuit of happiness,” the Arizona Republican’s stated reason for opposing the Federal Marriage Amendment was federalism grounds.

“The legal definition of marriage has always been left to the states to decide, in accordance with the prevailing standards of their neighborhoods and communities,” McCain said. “Certainly, that view has prevailed for many years in my party where we adhere to a rather stricter federalism than has always been the case in the prevailing views among our friends in the Democratic Party.”

Consistent with that federalism approach, McCain was a vocal supporter in 2006 of a proposed state constitutional amendment at the ballot in Arizona seeking to prohibit same-sex marriage and even appeared in a campaign calling for its passage.

(Ironically, the Arizona amendment in 2006 was the first anti-gay marriage amendment to fail at the ballot, although voters in the state corrected that by passing a different version of the amendment in 2008. The U.S. Ninth Circuit Court of Appeals would eventually strike down the amendment as unconstitutional.)

Unlike other politicians, McCain never evolved on the issue of same-sex marriage and continued to oppose it even after the ruling by the U.S. Supreme Court in 2015 in favor of marriage equality nationwide.

In 2008, McCain embarked on his presidential run and won the nomination to run against Barack Obama for the White House. Seeking to appeal to a nationwide audience, McCain reached out to the LGBT community through an interview with the Washington Blade, making him the first (and still only) Republican presidential nominee to participate in a Q&A with the LGBT media.

In the interview, McCain suggested he could support the Employment Non-Discrimination Act and was open to a review of “Don’t Ask, Don’t Tell.” Although he reiterated his opposition to the Federal Marriage Amendment, McCain suggested that might change if the courts forced states to recognize same-sex marriage.

Notably, McCain when asked to identify a gay role model chose 9/11 hero Mark Bingham, who helped lead passengers in diverting United Airlines Flight 93 from the terrorists’ intended target of the U.S. Capitol building. McCain delivered the eulogy at Bingham’s funeral and spoke warmly about him during the Blade Q&A.

“I love my country, and I take pride in serving her,” McCain said. “But I cannot say that I love her more or as well as Mark Bingham did, or the other heroes on United Flight 93 who gave their lives to prevent our enemies from inflicting an even greater injury on our country.”

McCain was endorsed during his presidential run by Log Cabin Republicans, a distinction Trump failed to achieve eight years later despite having the reputation in 2016 of being the most pro-LGBT Republican nominee in history.

But any growing acceptance of LGBT rights vanished during the first years of the Obama administration when lawmakers debated repeal of “Don’t Ask, Don’t Tell.” Faced with a Tea Party challenge to his Senate seat during a Republican primary from radio talk show host J.D. Hayworth, McCain was the biggest opponent of ending the prohibition on gays in the military and fought aggressively against changing the policy.

In one hearing of the Senate Armed Services Committee, McCain called into question the results of a 2010 Pentagon study calling for repeal of “Don’t Ask, Don’t Tell” and the implementation of open service.

“I remain concerned, as I have in the past, and as demonstrated in this study, that the closer we get to service members in combat, the more we encounter concerns about whether ‘Don’t Ask, Don’t Tell’ should be repealed,” McCain said. “These views should not be considered lightly, especially considering how much combat our forces face.”

When the Senate after an extensive, deliberate process and several failed attempts finally voted to repeal “Don’t Ask, Don’t Tell” in December 2010, LGBT right supporters were celebrating, but McCain wasn’t. The Arizona Republican called the occasion a “sad day” on the Senate floor.

As the advancement of LGBT rights continued throughout the Obama administration, McCain had a mixed bag of views and many times remain opposed. When the inclusion of a bi-national same-sex couple was considered as part of immigration reform in 2013, McCain was derisive of the effort and warned that using comprehensive immigration reform as a vehicle for advancing “social issues” would lead to failure for the legislation.

“I think it is a red herring,” McCain said. “I think then, do we want to guarantee a taxpayer free abortion? I’m telling you now, if you load this up with social issues and things that are controversial, then it will endanger the issue.”

But McCain also started exhibiting signs of moderating on LGBT issues. In 2013, McCain was among the 10 Senate Republicans to vote in favor of the Employment Non-Discrimination Act — although that vote came after public prodding from his wife Cindy McCain in the form of a postcard to her husband. The bill passed on a bipartisan basis in the Senate, but never came up in the Republican-controlled House.

Gregory Angelo, president of Log Cabin Republicans, pointed to his organization’s endorsement of McCain in 2008 as well as the Arizona Republican’s vote in favor of ENDA in a statement recalling the “long and positive history” between the two.

“His support for ENDA in 2013 opposing employment discrimination against the LGBT community will go down in history as a legacy vote proving his evolution in support of LGBT Americans followed in the historic footsteps of Barry Goldwater, the United States senator whose seat he inherited,” Angelo said.

Although he voted for ENDA, McCain in an almost contradictory vein was a co-sponsor of the First Amendment Defense Act, a federal “religious freedom” bill seen to enable anti-LGBT discrimination. The legislation would have undermined LGBT protections, including President Obama’s 2014 executive order against anti-LGBT workplace discrimination.

At the same time, McCain came out against proposed “religious freedom” legislation in Arizona. His voice helped get the ball rolling for a media firestorm that compelled Arizona Gov. Jan Brewer to veto the legislation.

After McCain was diagnosed with brain cancer and his life and public service came to a close, the Arizona Republican ended his public service on a note in support of LGBT rights.

After President Trump announced via Twitter last year he’d ban transgender people from the U.S. military “in any capacity,” McCain lambasted him. Although McCain’s objections at the time were about announcing the policy change via Twitter, that would change.

“When less than one percent of Americans are volunteering to join the military, we should welcome all those who are willing and able to serve our country,” McCain said. “Any member of the military who meets the medical and readiness standards should be allowed to serve — including those who are transgender.”

Chad Griffin, president of the Human Rights Campaign, referenced McCain’s support for transgender service as evidence of the Arizona Republican’s growing acceptance of LGBT rights at the end of his life.

“While we disagreed on many issues, later in his career, he became an increasingly vocal advocate for LGBTQ service members,” Griffin said. “In the last few years, Sen. McCain blocked anti-LGBTQ language in the National Defense Authorization Act, opposed a ‘license to discriminate’ bill in Arizona, denounced the Trump-Pence Administration’s effort to ban transgender troops and spoke out against the nomination of the anti-LGBTQ Mark Green to lead the Army. We join with millions of Americans in mourning his loss, and extend our deepest condolences to Sen. McCain’s wife, Cindy, and his entire family.”