Film Review: The Coming Back Out Ball” 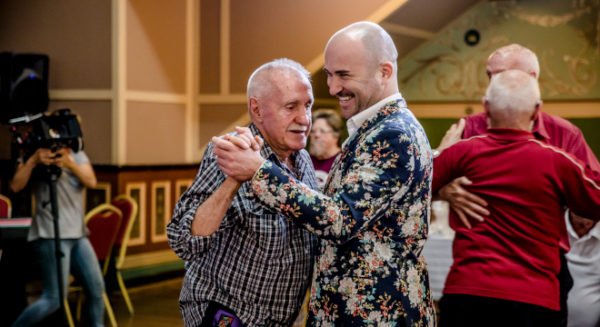 This wonderfully uplifting Australian documentary is the inspiring tale of how one very determined 40-something-year-old gay man gave the elderly LGBTQI population in Melbourne a reason to celebrate their lives.  The flamboyant TRISTAN MEECHAM along with his partner Bec Reed who make up ALL THE QUEENS MEN creates spectacular theatrical and participatory arts experiences that champion social equality, celebrating diverse community through creative actions and socially engaged frameworks.

When he first mooted the idea of a large social gathering that eventually morphed into a grand and impressive Ball, Meecham was greeted with a fair amount of skepticism and questioning of his motives.  It’s something that we share in the early part of SUE THOMSON’S excellent documentary that films every step of the way.  However it is impossible not only to be swept up with his infectious enthusiasm, but also by what is obviously his very genuine commitment to serve this neglected part of the LGBTQI community.

Thomson peppers the film with profiles of some of the elderly gay people who will participate in the Ball, and in doing so uncovers a wealth of stories of how their generation coped with their sexuality in a frightening and threatening society.  Several had married members of the opposite sex and led content lives, until their partners had passed and then they felt free to finally come out .

Meecham stresses that the Ball ….. and his monthly dance classes …. are for everyone on the LGBTQI spectrum, and one of the most touching tales was an intersex person who had come to terms with her situation and with how to deal with any negativity that confronted her.

The title Coming Back Out reflects the fact elderly LGBTQI in nursing homes often feel the need  to go back into the closet for their own safety.  On the other hand it also honors those in the community that were activists in the early gay liberation movement, and have now been somewhat marginalised by younger generations.

The Ball itself is  splendid affair . Hosted by legendary Australian performer ROBYN ARCHER, everybody is decked out in their finery, and Meecham and his crew have overlooked nothing.  There is a 30 piece gay orchestra, a trapeze artist performing in red high heel shoes. Most of all everybody is up and dancing  and just beaming all over.  For once these often ignored seniors were not alone and isolated but were in the bosom of a community that welcomed them with open arms.  It makes for such a joyous sight.

Two weeks later Australia voted to finally legalise same-sx marriage .  It would be nice to think it was because of this film