This new documentary from veteran lesbian filmmaker Andrea Meyerson (‘Laughing Matters’) is an affectionate look at one of the oldest and non-commercial women’s events in the US that celebrated its 30th Anniversary in 2014.  The highly successful Provincetown Women’s Week started out as idea by a few of the women innkeepers in the town to encourage some visitors back to town in the Fall after the lucrative summer season had ended. Also more importantly they wanted to establish a safe and welcoming environment for the lesbian community to get together and nurture, but even though they started this with such high hopes, no-one ever envisaged how enormous the event would mushroom into.

P.Town, as it is known by most, is a small town right at the very tip of Cape Cod and is in fact where the Pilgrims first landed before they upped anchor again and set off for Plymouth. There was a large Portuguese fishing community there at one time, and then the artists moved in and made their own colony. Quickly followed by the gay community, predominantly men, who made it into one of the most popular LGBT vacation destinations in the US.  There are as many as 60000 visitors in the summer, but after Labor Day the all-year-round population drops to below 3000 people. Summer and winter alike, the best part about this extraordinary small town is that is a place where everyone is welcome to just be themselves.

Meyerson talks to many of the original innkeepers and weaves together the story from the very first event when their initial panic that maybe no-one would show up, turned into one about the food running out when they  were overwhelmed with some 200 visitors. What strikes you listening to all their tales is how passionate they all are about running their bed & breakfast establishments even though most of them cannot survive on that income alone and so have to take on a full time job.  It doesn’t dent their enthusiasm for the town, or for Women’s Week, and the sense of camaraderie that they all share in this tight knit community is quite remarkable.

Looking back through the 30 years it is this same community of women who pulled together and proved to be an unshakeable source of support when the AIDS epidemic devastated the  local gay male population. 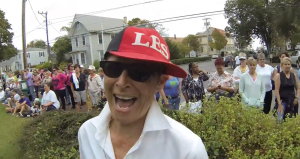 Most of the lesbian entertainers that now flock to the town for Women’s Week rave about what a joy it is to perform to such large excited crowds, and it makes for the highlight of their year too.  Some have been coming just a few years, but others like the comic Kate Clinton, a P Town resident and major catalyst for the Event, have been there practically every single year.

What Meyerson captures so beautifully is the undiluted feeling of sheer joy that everyone unanimously exudes about all the social activities of this Event from visitors to locals that has nothing at all to do with the financial impact on the town, but the remarkable sense of community that it fosters for everyone.

Now 30 years on, the printed guide to the Week, known by all as ‘The Bible’, is 96 packed pages full all activities and events that are crammed into the 7 days.  Even so, the Organizers, know that with their older core audience aging, they need to constantly re-think what to develop to include in future years to attract new generations of gay women to keep the Week alive and strong.

Meyerson’s enchanting documentary is a must see for any P Town aficionado, but also for gay women everywhere who have never dipped their toes into that  Cape Cod water yet.

A Radical Lesbian: Review of “The Daring Life And Dangerous Times of Eve Adams”